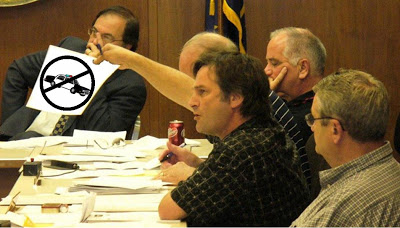 Hey, that’s not your garden variety vacuum … that’s a crater on 15th Street, and what are those city garbage trucks doing parked at the bottom of it? We demand a full investigation … of Auntie V’s behavior at the polling station last November. Was it real, did it really happen, or is Randy Hubbard already launching pre-emptive strikes?

No, wait … it now appears that falsified data is to blame for the subject heading, seeing as we’ve never received the proper information, although in fact it might be explained by the deleterious effects of all that Kool-Aid consumption undertaken behind the bolted doors of the palatial $2 million brewery we’re building with taxpayer money.

That’s right: Radicalism is God’s way of saying that you’re making too much sense.

Of course, one tends to become supremely paranoid when an anonymous troglodyte informs you that your councilman should sue you for libelous and slender. Nah, wouldn’t happen; he’s too busy compiling random lists of city expenditures sans meaningful context or explanation, pretending that it constitutes a revelation, subsequently exploring the parameters of Dewey Heights epistemology (It Is What It Is … Darlings), and finally concluding with this latest in a series of nonsensical gems:

Deficient is the result of lack of fiscal preparation.

Stunning. Like Bob Dylan said, “from the Grand Coulee Dam to the Capital.”

New Albany’s city council reconvenes tonight, and the Tribune examines the current status of firefighter hiring and new police cars in a Wednesday article. The agenda can be viewed here. The smoking ordinance remains on the back burner, so continue smoking ’em if you’ve got ’em.

We’ll be back some time late tonight with all the gory details.