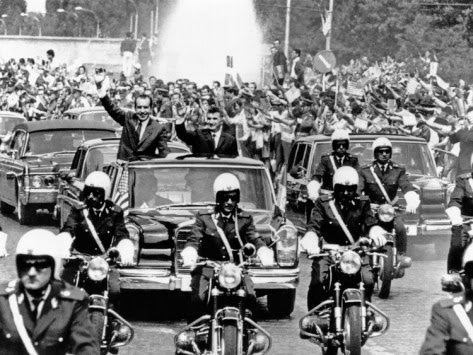 Here’s one I haven’t seen — until now.

According to the IMDb, The King of Communism: The Pomp & Pageantry of Nicolae Ceausescu won the Grierson Award 2002 as Best Historical Documentary. The choreography didn’t end well; shall we say, mourning was subdued after the fall.

A string of downfalls of communist governments in Eastern Europe in late 1980s was branded ‘velvet revolutions’ for being peaceful. But in Romania the transition was horrendously bloody, both for the country and its dictator Nicolae Ceausescu.

On Christmas Day, Romania commemorates the 25th anniversary of the revolution that claimed over 1,000 lives in street gun battles, and included a lightning-swift trial and execution of Ceausescu and his wife.

Two years ago, I watched a blockbuster documentary about Ceausescu.

The documentary is called The Autobiography of Nicolae Ceaușescu, and it is simply astounding. Unlike most other documentaries, there is no narration. One must know the basic story of Communist Romania’s dramatic ups and downs during the Ceaușescu era (1965-1989), so as to contrast it with the story as told here.

Three hours of film culled from more than 1,000 hours of footage, frames shot originally to document the dictator’s cult of personality and a country as he imagined it, tell the story precisely by showing what life in Romania was not.

You can view the film in its entirety here at The Daily Motion. It has a tendency to appear and reappear, so be aware.

Following is a sampling of articles about the Ceausescu era appearing over the years at NAC.

Ceausescu and his cult of personality: Genius, torch bearer and demigod.

ON THE AVENUES: Wichita, or maybe Targu Mures.

Film: “The Death of Mr Lazarescu.”

Film: “The Way I Spent the End of the World.”