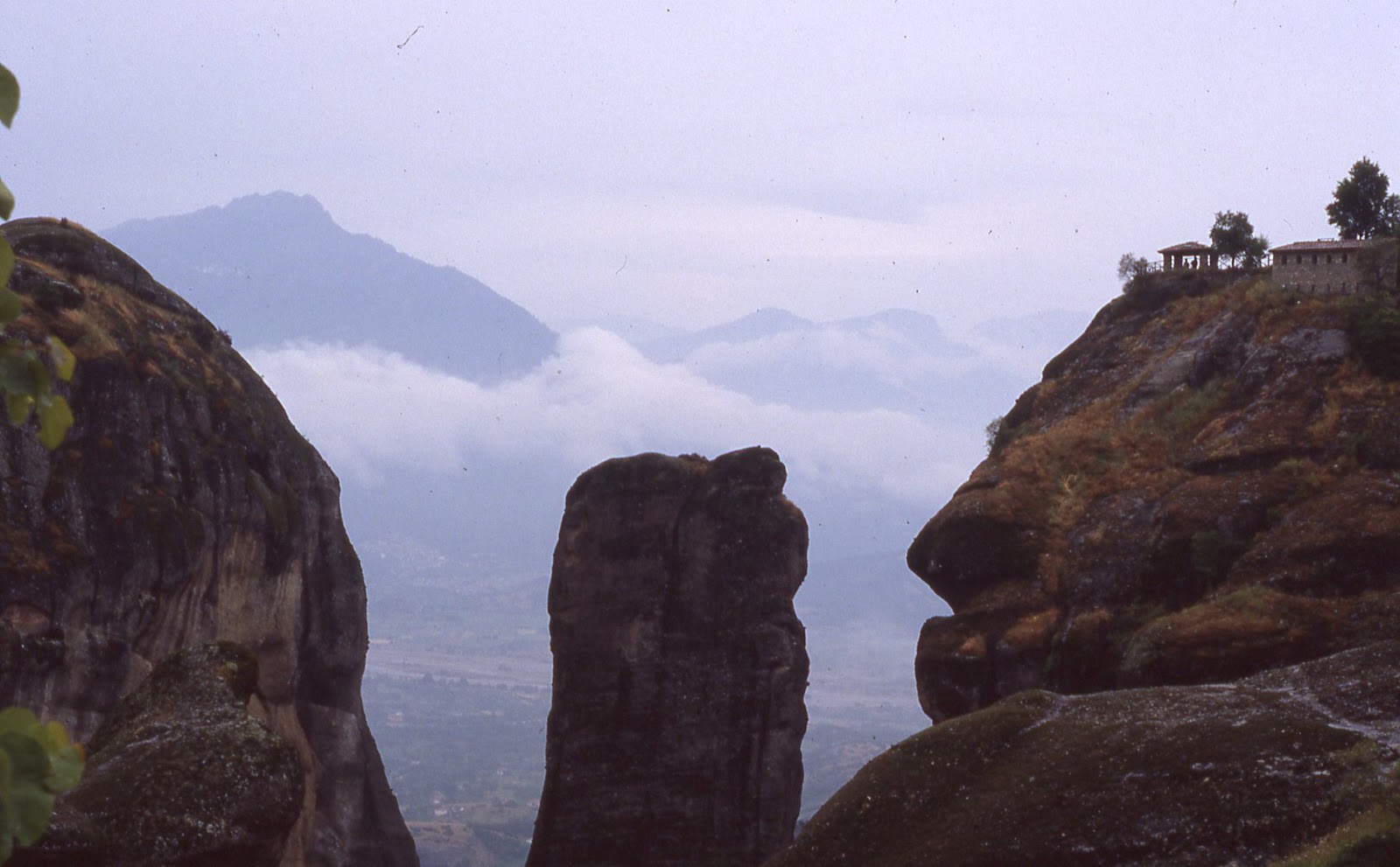 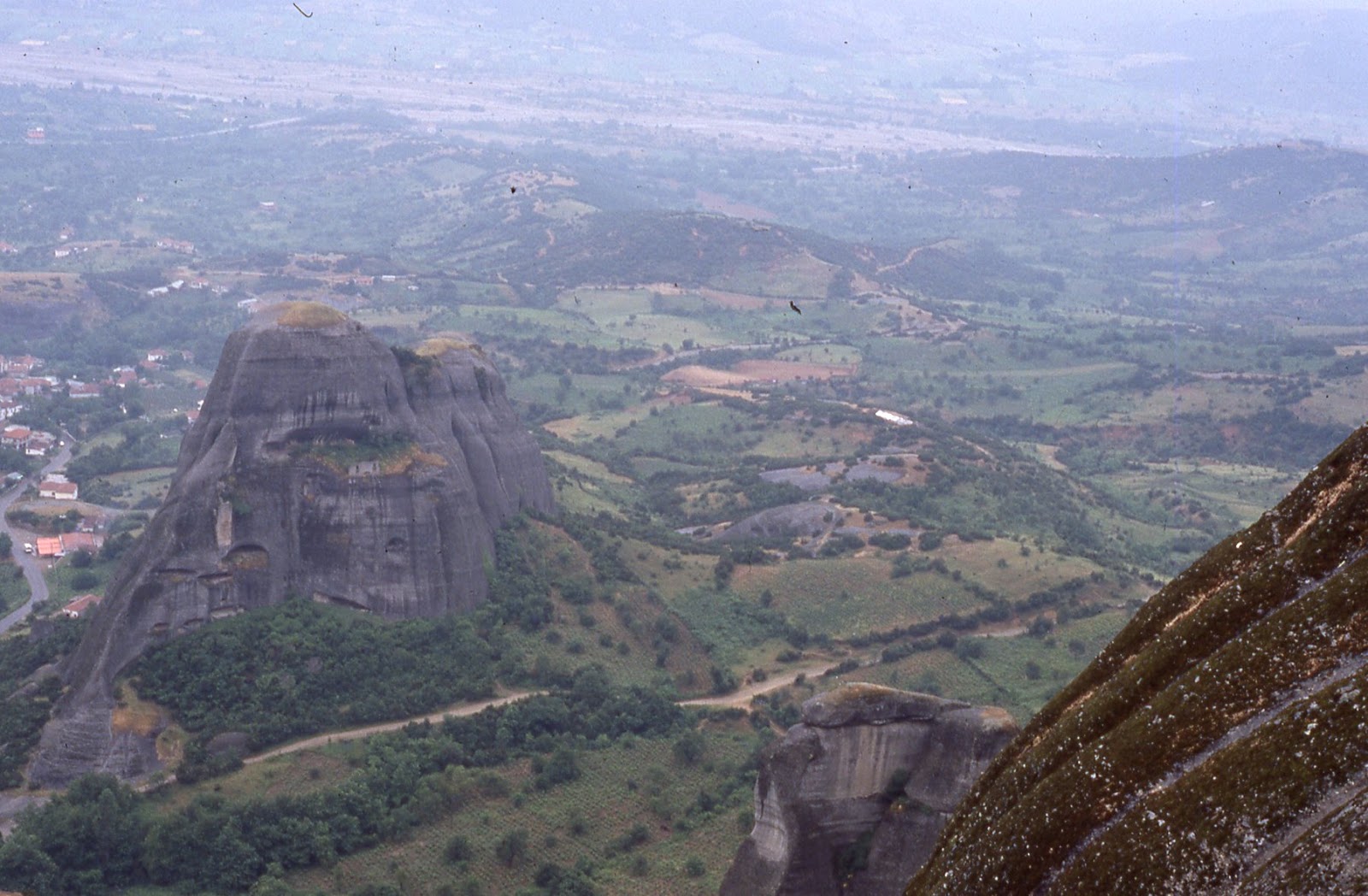 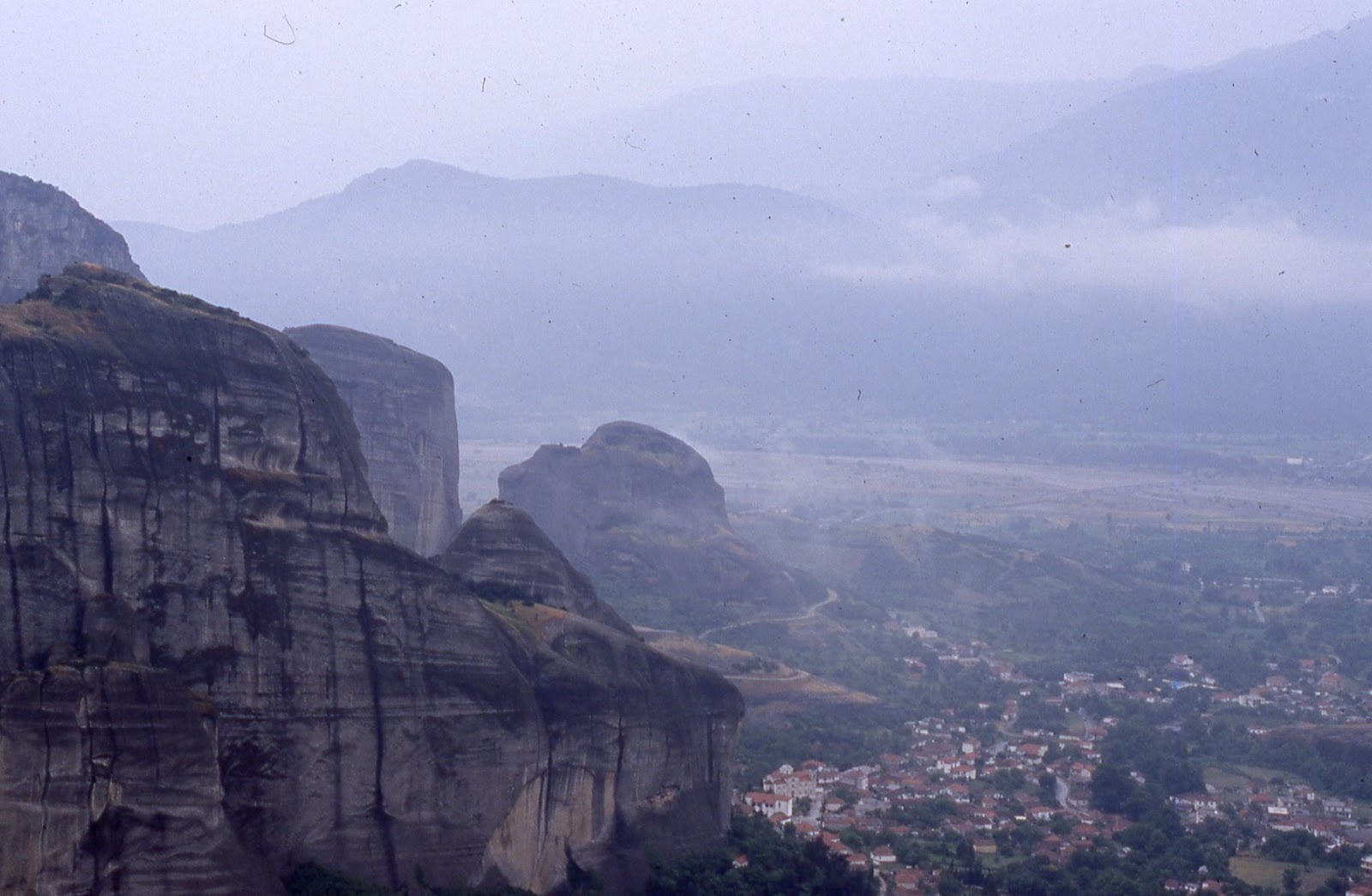 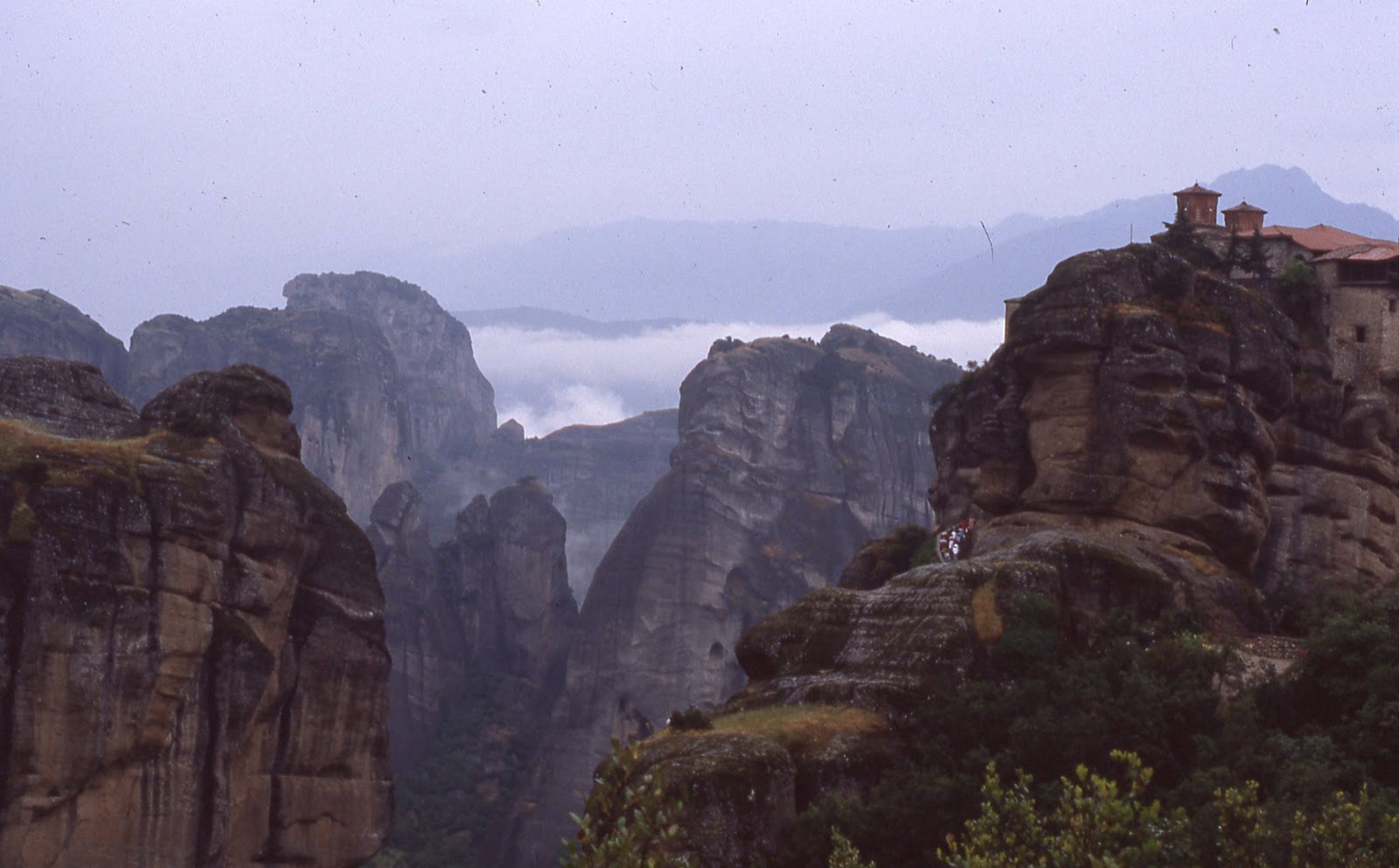 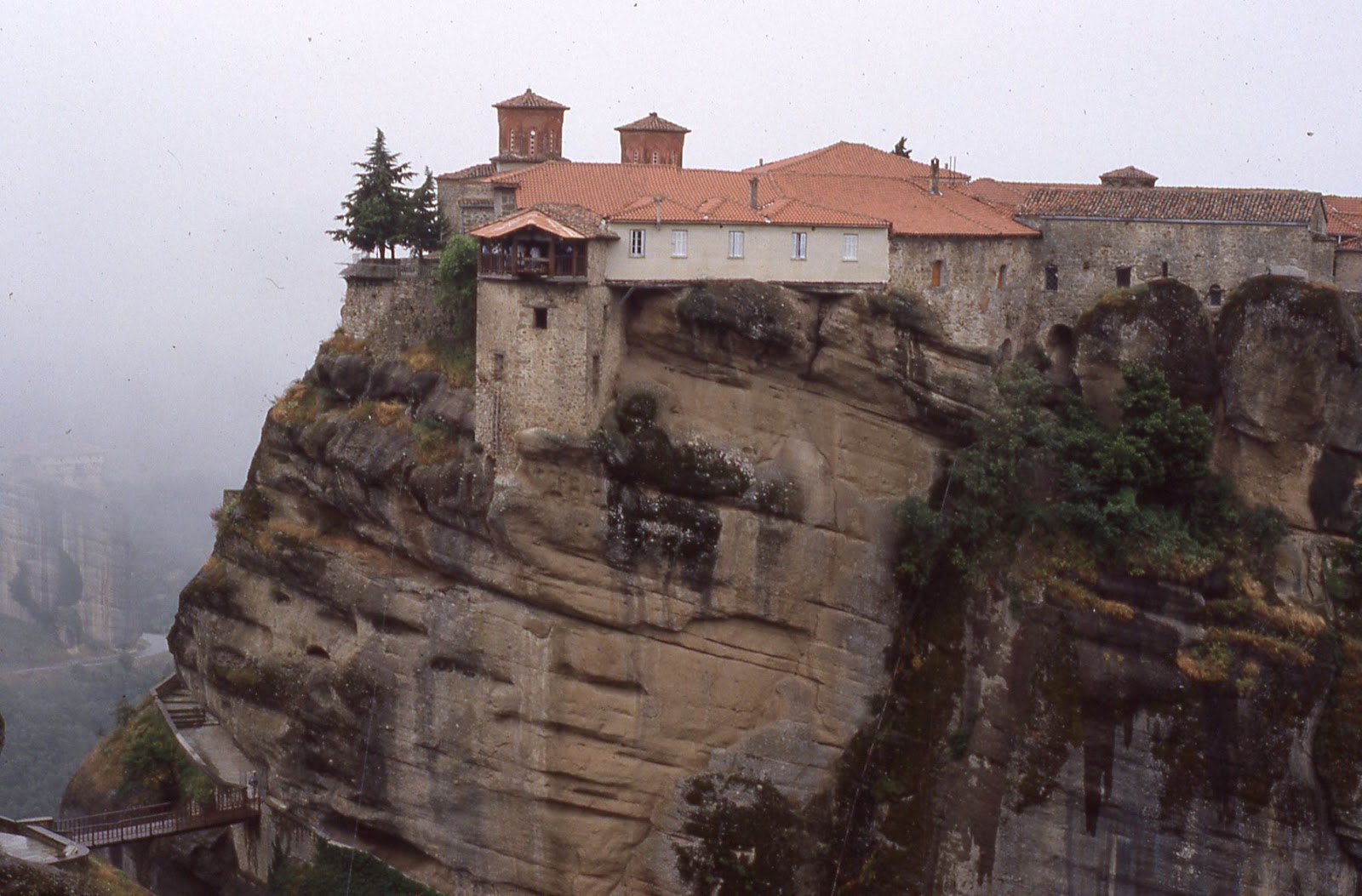 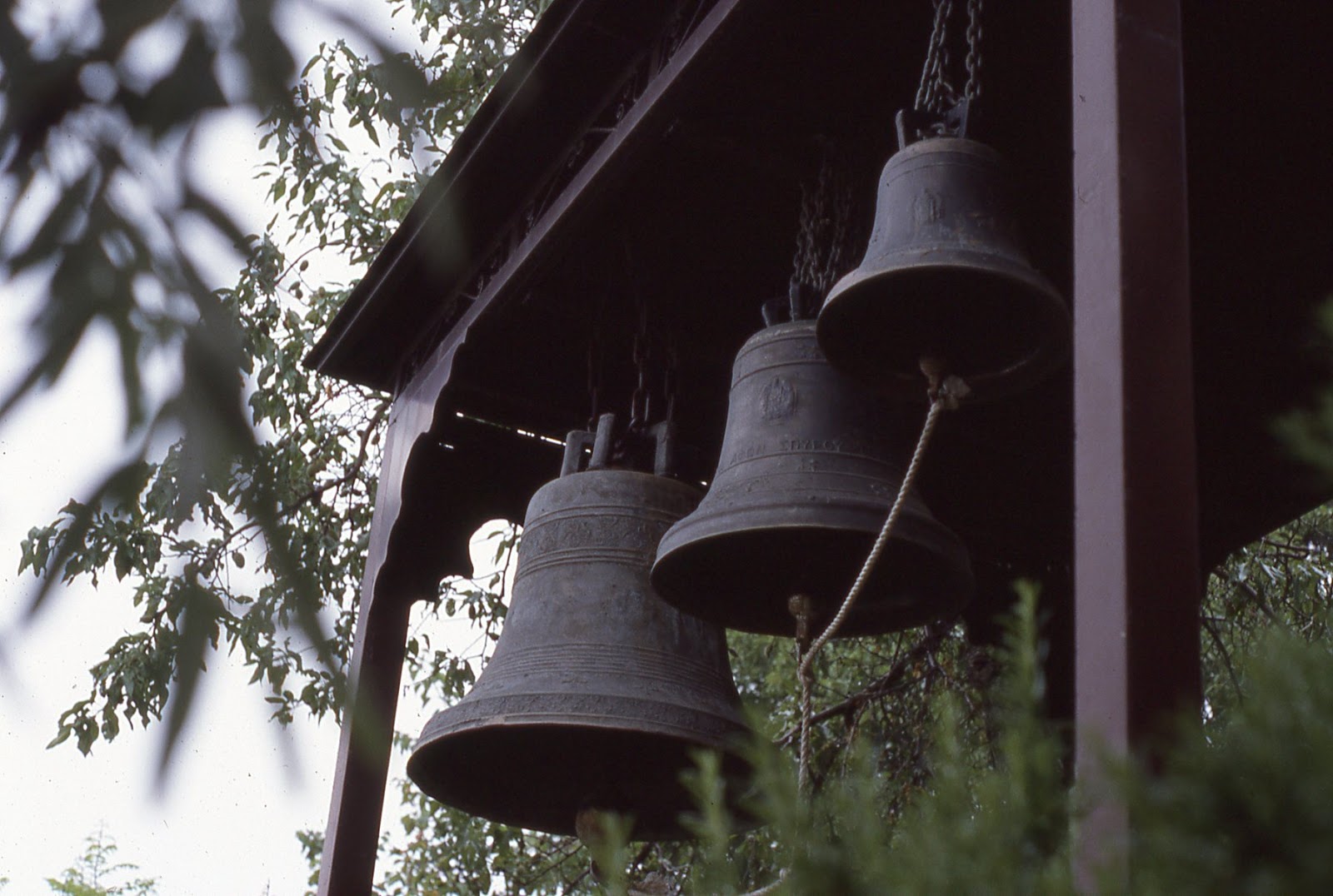 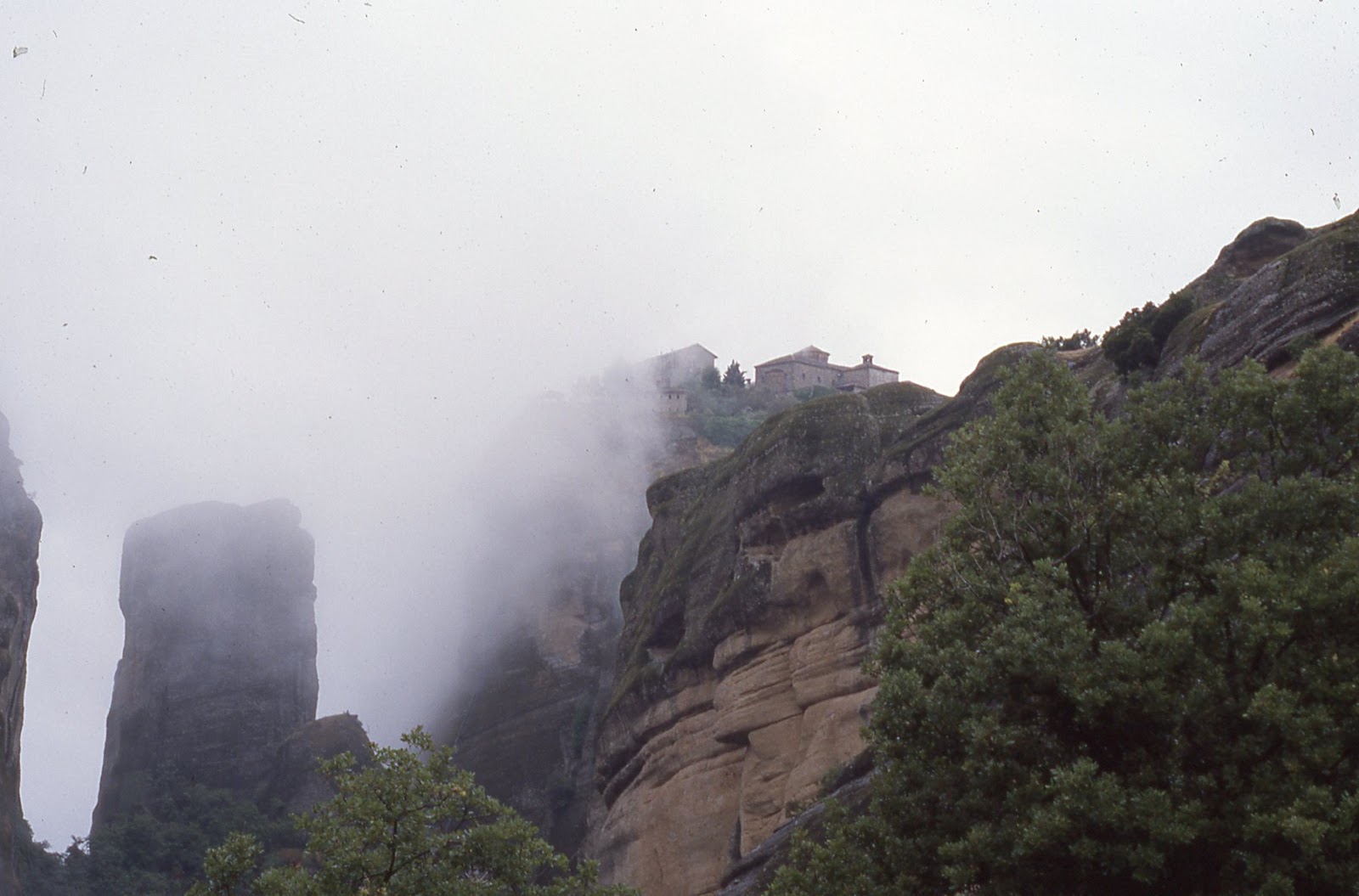 From 1985 through 1994, a period comprising six trips to Europe, some of them quite lengthy, most of the 2,500-plus photos I took while on the road were committed to slide film.

This seemed like a good idea at the time.

The 1970s-vintage slide projector that sufficed for viewing into the 1990s ceased functioning two decades ago, so after all these years of not being able to see these images, I finally purchased a decent quality scanner for Saturnalia.

The process of digitalizing these images (and a few thousand more non-slide photos) probably will last the remainder of my life. Short term goals are more modest, as it has come time to write the narrative of the 1987 trip, something currently existing in fragments only. Being able to see the photos will be of tremendous value when it comes to collating memories.

The photos here are of Meteora, monasteries and rock formations.

The first was Kalambaka, itself a nondescript modern town, but the functional gateway to the spectacular, otherworldly monasteries of Meteora, which are man-made complexes of Orthodox holiness and isolation perched like Technicolor mushrooms atop tall shafts of sheer volcanic rock – accessible by local bus thanks to the wonders of 20th-century roadway engineering, but previously reached exclusively by rope and basket conveyances, pulleys and profuse prayers.

I’m a dismal photographer. Here’s the lowdown about the up-high.

The Metéora (Greek: Μετέωρα, pronounced [mɛˈtɛoɾɐ], literally “middle of the sky”, “suspended in the air” or “in the heavens above” — etymologically related to meteorology) – is a formation of immense monolithic pillars and hills like huge rounded boulders which dominate the local area.
It is also associated with one of the largest and most precipitously built complexes of Eastern Orthodox monasteries in Greece, second in importance only to Mount Athos.[1] The six monasteries are built on natural conglomerate pillars, at the northwestern edge of the Plain of Thessaly near the Pineios river and Pindus Mountains, in central Greece.
Metéora is included on the UNESCO World Heritage List under criteria[2] I, II, IV, V and VII.[3]
The nearest town is Kalambaka.