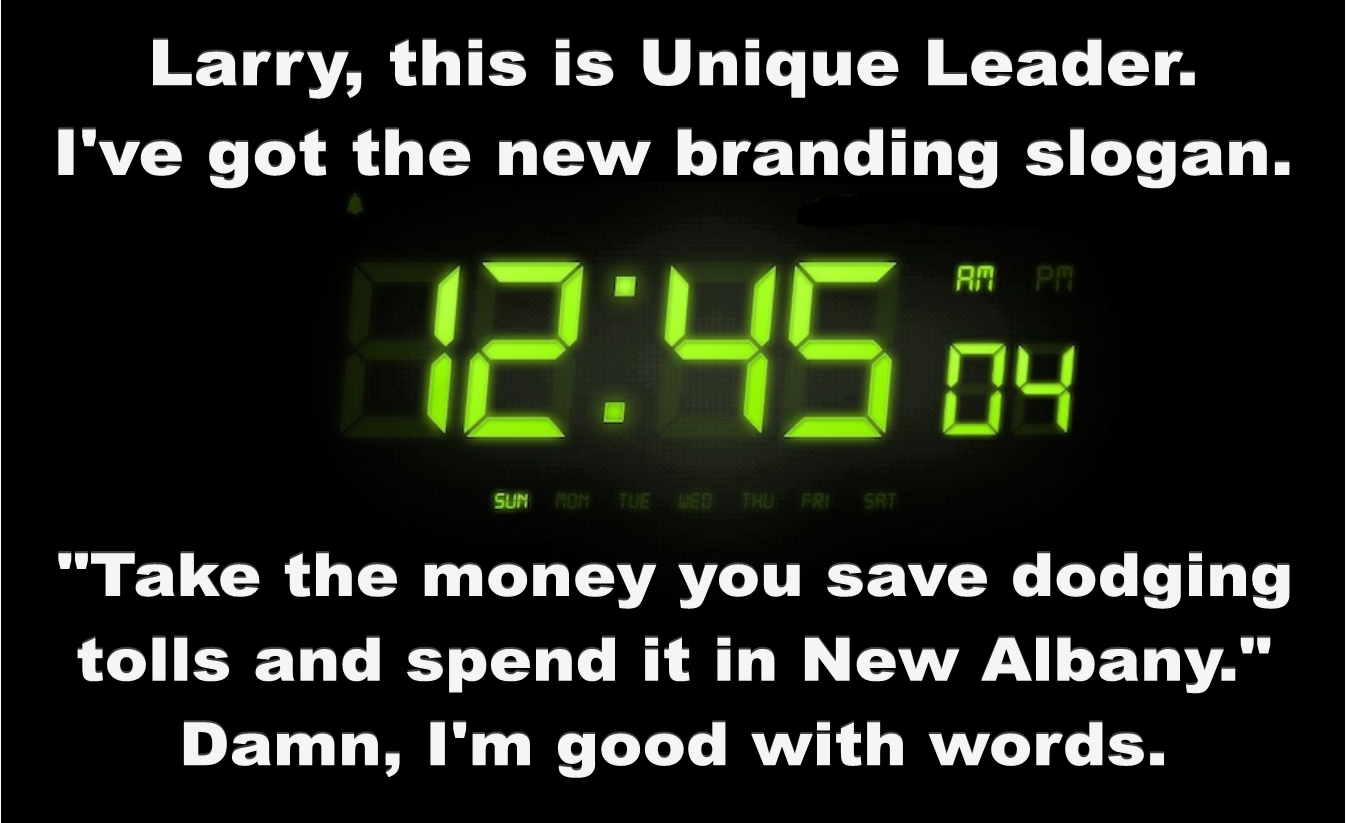 Am I the only one finding it bizarre that Scott Wood now is the city’s de facto spokesman for street grid decisions he has played little part in making?

Isn’t Wood supposed to be serving as site manager and press agent for the Summit Springs hilltop high-rise middle-finger-to-environmental-consciousness city collaboration with the Carefree Kelleys?

Then again, Gahan/Rosenbarger/Duggins are the Toxic Troika when it comes to coherence in such matters.

Our Ever-Victorious Iron-Willed Leader deserves no credit whatever for “his” two-way street grid reform, which will be implemented both incompletely and too late to help with the opening phases of bridge tolling. Rather, Jeff Gahan prefers that we all be guinea pigs in an experiment to determine whether INDOT’s rosy predictions about toll dodging’s brevity are correct.

Since many commuters are taking a long weekend, we may not see the true nature of things until Monday morning.

Bridge tolls: For K-Stem, it hasn’t been this good since that last lunch date with Mitch Daniels.


THE UNTOLLED STORY: Is New Albany ready for extra traffic on the Sherman Minton?, by Danielle Grady (Hiring Freeze Gazette)

The director of the city plan commission said that he and other officials believe that when tolling begins on the Lewis and Clark, Abraham Lincoln and Kennedy bridges on Dec. 30, more cars will be using the untolled Sherman Minton Bridge to travel from Indiana to Kentucky — and some of those cars will be crossing through downtown New Albany to get there.

Wood isn’t alone in his assessment.

Traffic models created by Hannum, Wagle & Cline Engineering Inc. for the city also show that more people will be driving in New Albany in the future, Wood said.

But those models are conservative in the eyes of the city. They don’t predict there will be a significant increase in traffic during rush hour, Wood said.

Officials who are locals, such as Wood, have ideas different from HWC on how they would get from Indiana to Kentucky if they were avoiding tolls. They envision routes that might take drivers through downtown New Albany.

So what has been done to prepare for more drivers?