NA Confidential remains parked at a decidedly unfashionable Blogger Dot Com address because the price is right — which is to say, it’s free.

It reminds me of the time I helped start a pub, which didn’t have a snowball’s chance in Guam because it was badly located somewhere off Grant Line Road. Then as now, I believe location to be irrelevant so long as what you’re doing represents quality.

More on this in a moment.

As a humanities major, raw numbers have a tendency to make me suspicious, but trends can be revealing, and I’ve gradually taken a greater interest in traffic as it pertains to the blog’s readership. What this examination usually verifies, though I didn’t always pay attention, is that being first on the scene matters, especially if the topic is food and drink.

Sometimes this also is true of other locally-oriented stories, as with retail openings, building rehabs and the like. My political and cultural obsessions? Far less so, but one factor remains constant, because if the post gets picked up by even a few persons on social media, traffic increases exponentially.

As such, things got interesting during the final two days of the year, after I’d already finished sweeping up and tidying the joint in readiness to kiss 2016 goodbye.

First on the 30th there was this. 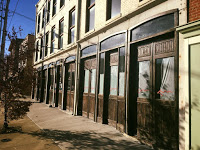 Cigars and spirits are coming to downtown New Albany in the form of an establishment tentatively to be known as Match Cigar Bar New Albany.

Then on New Year’s Eve, this.

“So, what’s coming to 324 E. Main Street in 2017 is (WORKING TITLE), a fresh seafood grill with a raw bar, including a rooftop bar overlooking the Ohio River. Think of it as a comfortable niche between fast food and the high end. It’ll be a family-style approach and a very casual place, with most dishes served in baskets and buckets, with a price point to match. The same goes for great beers and the sort of bar program you’d expect from us.”

The “seafood concept” post of Eric’s took only a few hours to become the year’s most read, and about a day to climb to the top of the all-time rankings.

Similarly, the “cigar lounge coming soon” quickly settled near the top of the month’s list, then doubled its page views suddenly on New Year’s Day, also approaching the upper tier on the leader board for 2016.

Obviously, both Eric and Jeff Mouttet pushed the post on their social media sites, hence the closest thing to viral I’ve yet experienced — at least since my frozen weenie sandwich bar menu got picked up by Uproxx back in 2014.

ON THE AVENUES: Law-abiding by weenie was never this viral. 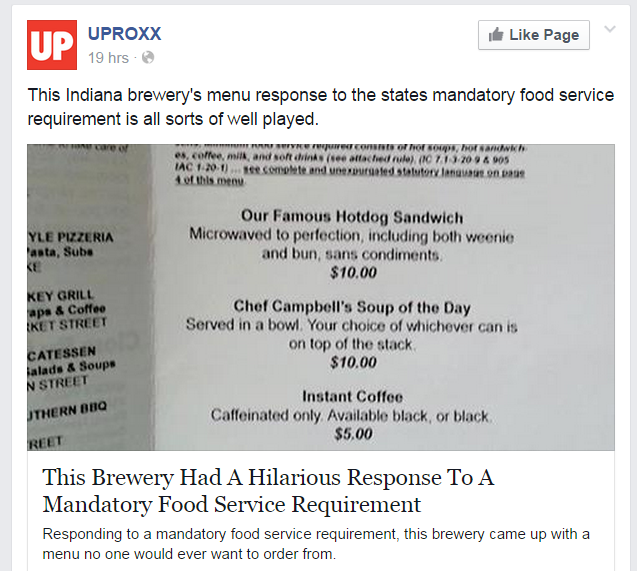 I’m not sufficiently technological to make proper sense (or use) of these developments, apart from saying that it’s always nice to be read, and if forced to choose between famous and infamous, I’ll always opt for the latter.

However, they play into some thoughts I’ve been having for a while, centered on the fact that I’ve been doing this blog thingie pro bono for 12 years. It takes a lot of time, and maybe I’m missing something — like looking at ways to wet my own beak now and again.

And yes, it would be far easier to touch juice if I were a paving contractor … or mayor of the city.

Yesterday I noticed something at Jim Wright’s Stonekettle Station blog, which is at Blogger just like NA Confidential:

Like anybody else, I have a mortgage and a kid in college and a powerful need to eat once in a while. As Stonekettle Station has increased in popularity, it takes up more and more of my time to write the content you come here for, and that means I’ve got less time to do the things that actually pay the bills. I have no desire to move Stonekettle Station behind a paywall, I’ll stop writing before I do that, but if you think what I do here is worth a bit of your hard earned money well then I’m not too proud to accept a token of your appreciation. And thank you.

NA Confidential comes nowhere close to the turnstile spin Wright generates, but this isn’t the point. The point is that my time is worth something, even if I’m a hopelessly quarrelsome and cantankerous curmudgeon.

Here’s the conclusion: I’ll be looking into ways of making a few farthings off the blog. It may be with advertisements and sponsors. It may be with a tin cup proffered for donations. Your thoughts are appreciated, as always.