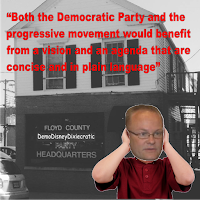 Woe is us — what are we to do when we keep repeating the same act and it keeps turning out the same way?

Here’s how: Just stop it. Vary the routine. Come up with a new plan.

The Floyd County Democratic Party has kicked off the New Year with the same old Disney song and dance, so it doesn’t look like the tried and true is going to be of any assistance.

Isn’t it time to trade in that battered hulk for something new and progressive? Here are two articles from The Guardian that make the case.

Trump and Brexit left progressives aghast – they should be emboldened, by Jeff Sparrow

As a movement dedicated to social transformation, the left must reclaim the idea of progress from the reactionaries and demagogues

… Unfortunately, so much of what passes for activism now centres on an individualised moralism, less about changing the world than about making yourself feel (or perhaps sound) good while all about you everything remains exactly the same.

In 1959, Raymond Williams described the seemingly insurmountable gulf between the progressive intellectuals of his day and the great bulk of the population. “Nothing,” he wrote, “has done more to sour the democratic idea among its natural supporters, and to drive them back into angry self-exile, than the plain, overwhelming cultural issues: the apparent division of our culture into, on the one hand, a remote and self-gracious sophistication, on the other hand, a doped mass.”

Since, then, of course, that division has only widened …

… How then will we respond? The temptation will be, once again, to defend liberal values by reinforcing the institutions of liberalism. But that’s not going to work. Quite simply, progressives must discover progress. Rather than buttressing a moribund status quo, the left needs to place itself on the side of change. That’s how we win – by reclaiming the notion of a better future from the reactionaries and demagogues.

Themes of 2016: Progressive parties have to address the people’s anger, by Michael Sandel

The election of Donald Trump and the triumph of Brexit – the two political earthquakes of 2016 – resulted from the failure of elites to grasp the discontent in democracies around the world. The populist revolt marked the rejection of a technocratic approach to politics incapable of understanding the resentments of voters who feel the economy and the culture have left them behind.

Some denounce populism as little more than a racist, xenophobic reaction against immigrants and multiculturalism. Others view it as a protest against the job losses brought about by global trade and new technologies. But to see only the bigotry in populist protest, or to view that protest only in economic terms, misses the fact that the upheavals of 2016 stemmed from the establishment’s inability to address – or even adequately recognise – genuine grievances …

… Before they can hope to win back public support, progressive parties must rethink their mission and purpose. To do so, they should learn from the populist protest that has displaced them, not by emulating its xenophobia and strident nationalism, but by taking seriously the legitimate grievances with which these sentiments are entangled. And that means recognising that the grievances are about social esteem, not just wages and jobs.