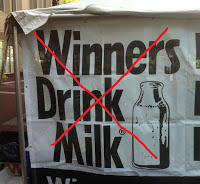 I believe that drinking milk is an aesthetic and culinary outrage on a par with Bud Light and McDonald’s. Moreover, drinking milk is a conspiracy foisted on us by the multinational diary lobby. Apart from all that, I also dislike milk intensely, though you can make it into cheese or ice cream and I’m golden. Last night I had a dream in which I was drinking milk and commenting about how perfectly it paired with a dish. Now I’m scared to set foot outside the house. Booze is the preferred antidote to this condition, although probably not White Russians at a time like this.

After thinking about it, it occurred to me (as it usually does) that we’d all been here before, and indeed we have … most recently in 2014 (below). The photo above was taken in Indianapolis in 2012.

To me, it’s always been aesthetic.

Milk is little more than liquid snot, and to drink it by the glass has struck me as revolting for over thirty years. It’s just a bonus to be “un-American” by rejecting milk in liquid form, although I’ve returned to eating cereal with almond milk as moistening agent.

I adore cheese, cream-based sauces, dairy-laden desserts and Milk Stout; obviously, I can tolerate lactose, but drink it from a glass?

Got Milk? Might Not Be Doing You Much Good, by Aaron E. Carroll (NYT)

Almost no one will dispute that when a baby is born, breast milk is the best nutrition a mother can provide. All mammals nurse their young, and breast milk benefits a newborn infant in ways above and beyond nutrition. In fact, until 1 to 2 years of age, the American Academy of Pediatrics, the World Health Organization, the Institute of Medicine and more promote breast-feeding as optimal.

Unfortunately, breast-feeding until that age is often difficult, if not impossible, because mothers have to return to work, and children go off to preschool or day care. So we often replace human milk with the milk of cows or other animals. But at a certain point, we have to acknowledge that we are the only mammals on the planet that continue to consume milk after childhood, often in great amounts.

More and more evidence is surfacing, however, that milk consumption may not only be unhelpful, it might also be detrimental. This is in spite of the fact that the United States Department of Agriculture and other organizations advocate that even adults should drink at least three cups a day.