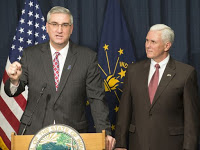 Let’s put it this way.

Matthew Tully was outspokenly critical of Mike Pence during Pence’s time in the Statehouse, and the reason I know this is because I cherry-picked Tully’s writings very often in order to make my own “screw Pence” points.

Consequently, I regard Tully as a credible witness, so in fairness, let’s consider this assessment of Indiana’s incoming Governor, Eric Holcomb.

It’s only been two weeks, but Gov. Eric Holcomb is off to a solid start as governor. The reason: His focus is on all the right things.

He’s not yet been in office for two weeks, but Gov. Eric Holcomb is off to the kind of start that gives you hope about the things to come.

With his speeches, staff appointments and legislative agenda, Holcomb is reminding Hoosiers of what it’s like to have a governor who keeps his focus on the kind of issues that truly matter. I know that sounds simple, and it’s hard to understand why a governor would do anything but that. Nonetheless, we’ve seen up close what happens when a governor fails to focus only on the core issues facing our state.

Holcomb has seen it, too, and it’s looking like he’s intent on avoiding the damage that comes when one’s ideology leads the way. Or when one forgets that a governor’s job above all else is to move his or her state toward more prosperity and opportunity. Or that governing is not just about indulging and exciting your base.