Newly minted activists want Democrats in Washington to actually fight against Trump — or get out of the way … a fired-up progressive base is marching far ahead of the party leadership. Democrats are scrambling to keep up …

That’s the Huffington Post; this is somnolent New Albany, where the Floyd County Democratic Party had a pleasant Central Committee meeting on Saturday morning, with piped-in elevator music, a floor show by the Disneyettes and fresh Kroger doughnuts.

However, the theme was slightly misleading.

Stronger? Isn’t it true that one first must be strong in order to add the superlative -er? Recalling and paraphrasing the immortal words of Jim Morrison, “They’ve been down so goddamn long, that it looks like up to them.”

Surely they adhered to the traditional niceties, popped a few Diet Cokes, and reaffirmed the doctrine that the same losing tactics, leading inevitably to the same outcome, over and over again, is peachy keen — and as they met, the tenor of the times was exploding all over the country, suggesting that maybe something different is merited. 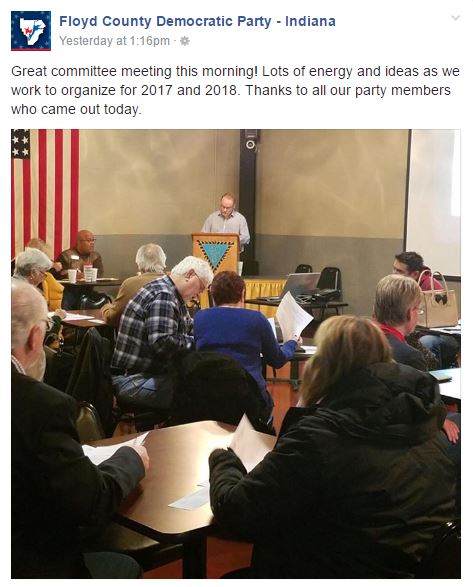 Couldn’t you feel the raw excitement just looking at the photos? All those energized white-haired folks — and those were just the YOUNG Democrats.

Okay, not exactly. The Young Democrats met earlier last week, and almost filled a small room. Look at all the progressives … 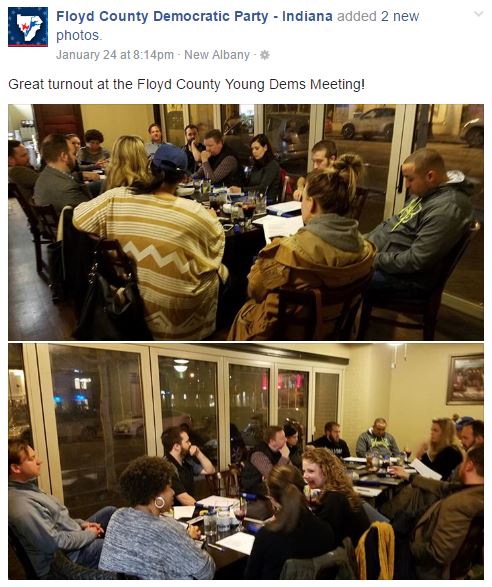 We’ve heard no sounds of marching feet in New Albany, at least yet. However, for the FCDP to continue as Republican Lite may not be the best strategy to mobilize a more vigorous base, as we discuss elsewhere this morning.

The Democratic Base Is Marching Right Past Its Leaders, by Jennifer Bendery and Ryan Grim (Huffington Post)

… (Senate confirmation votes) came just days after millions poured into the streets in more than 650 women’s marches on Saturday made it that much more jarring. Those marches, after all, had not been sparked by Planned Parenthood, or the Democratic Party, or unions, or MoveOn.org, even if they did pitch in to help once it got going. Instead, they came from regular, angry people ― people who may try to replace the ones in power …

… The organizers of the march provided the platform that an angry electorate demanded, but they didn’t dictate what comes next. Yes, they co-hosted the march with well-established, progressive groups in Washington D.C., like Planned Parenthood and the Natural Resources Defense Council. But they didn’t coordinate with those groups to collect attendees’ names and email addresses to keep them engaged in those groups’ fights around reproductive rights or climate change. Instead, the organizers collected contact information for the local organizers themselves, which may wind up being far more powerful than another giant list of progressives.