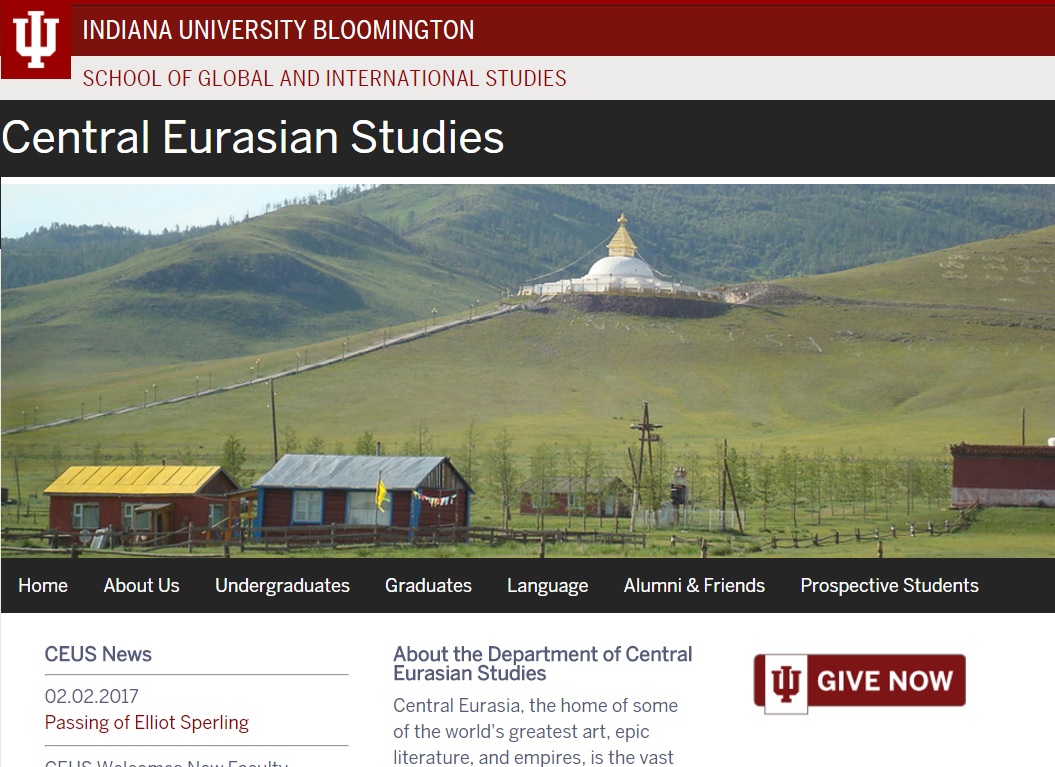 The Department of Central Eurasian Studies, part of Indiana University’s School of Global and International Studies, is doing quite well under the supervision of acting department chair Toivo Raun. Raun and his counterparts bring out the best in these student non-athletes, and never a teaching moment is missed.

All of which is my way of making two points.

1. Indiana University is a school that happens to have a basketball team, and not the other way around.

2. If I knew then what I know now, this would have been my department.

About the Department of Central Eurasian Studies

Central Eurasia, the home of some of the world’s greatest art, epic literature, and empires, is the vast heartland of Europe and Asia extending from Central Europe to East Asia and from Siberia to the Himalayas. The Department of Central Eurasian Studies at Indiana University took its present name in 1993. It was founded as an Army Specialized Training Program for Central Eurasian languages in 1943, then formally organized as the Program in Uralic and Altaic Studies (from 1956 to 1965) and later the Department of Uralic and Altaic Studies (from 1965 to 1993). The Department has long been one of the world’s leading centers of academic expertise on Central Eurasia as well as the sole independent degree-granting academic unit staffed with its own faculty of specialists.

The Eurasian heartland, which has played a seminal role in the development of both Europe and Asia, is still insufficiently explored by modern scholars. The Department of Central Eurasian Studies offers a unique area studies program, emphasizing language proficiency and a thorough grounding in indigenous cultures. Our program provides students with the means to study in depth a region of specialization in the Central Eurasian area through mastery of one or more languages as well as the history and culture of a given region by means of a multidisciplinary approach. The graduate degree program combines two key features: (1) a Language of Specialization (LOS), which gives students access to the chosen culture through the voices of its people; and (2) a Region of Specialization (ROS), which includes courses on various aspects of the chosen culture. In addition, while becoming familiar with various disciplinary approaches to the study of Central Eurasia, students are strongly encouraged to provide depth to their studies by thoroughly assimilating the methodology of a single discipline. The undergraduate degree program allows students to pursue one of two tracks: (1) Language and Civilization Track; and (2) Central Eurasian Track. The Department’s programs offer exciting possibilities for study and research as well as wide-ranging opportunities for careers in academia, government, and international business.