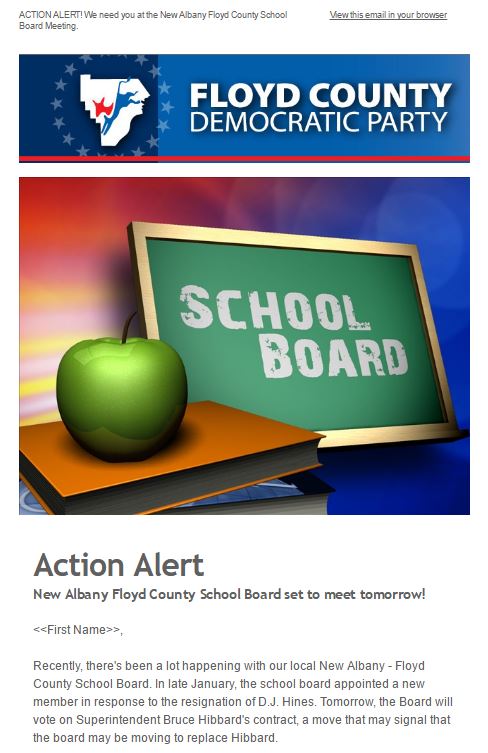 This one appears to be written in some sort of geek code. The school board has appointed a new member (actually, he’s a Democrat) in a move that may be a sign that maybe something’s afoot, so everyone show up and … do what?

Bonus points if you not only can interpret what Adam is saying, but also relate it to HB 1131, which if passed by the legislature would mandate the inclusion of a school board appointment to municipal redevelopment commissions.

Wait … it’s coming to me … both Jeff Gahan and Bruce Hibbard don’t want a school board unless it’s a captive rubber stamp, but the local Democratic Party is somewhat of a rubber stamp itself, and so it’s urgent to take action in this instance, but just as important for Adam to say nothing at all when Gahan decides to purge low-income people from The Project …

Recently, there’s been a lot happening with our local New Albany – Floyd County School Board. In late January, the school board appointed a new member in response to the resignation of D.J. Hines. Tomorrow, the Board will vote on Superintendent Bruce Hibbard’s contract, a move that may signal that the board may be moving to replace Hibbard.

It’s critical that we speak out. Take action today and ensure that our school board represents the best interests of our community and our students.

NAFC school board to vote Monday on superintendent rollover, by Aprile Rickert

If approved, Bruce Hibbard would need to renegotiate in July 2018 to continue

FLOYD COUNTY — The New Albany-Flood County School Board will vote Monday on whether or not to let superintendent Bruce Hibbard’s contract roll over after it expires in July 2018.