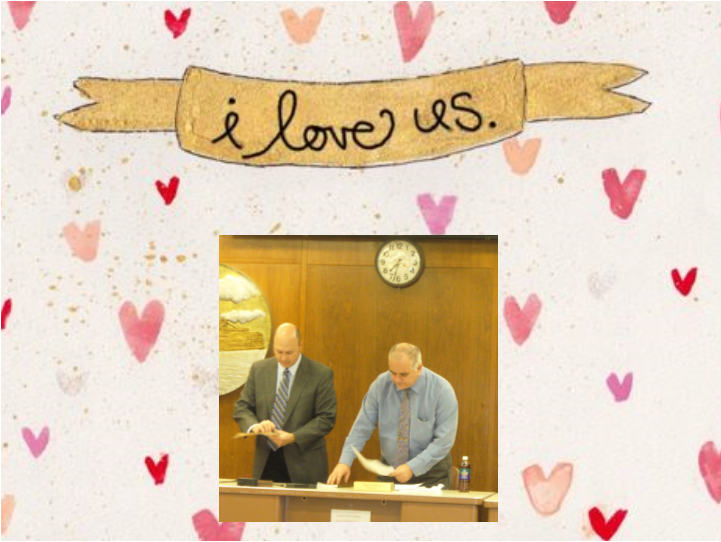 LAST: Gahan and Coffey Together Forever, Part 6: Let’s hear it from the council: Can taxpayers speak openly during their time, or does the Wizard decide who is heard? (24 January 2009).

In my fifth Tribune column, I introduced the general public to the spasmodic violence of Dan Coffey’s violent Copperhead Shake. It did not create an uproar, primarily because most people already knew that Cappuccino is the reaaw deal.

Elsewhere upon publication, I noted in passing …

As for the Coffey Agonistes piece today, all I ask is that anyone planning on attending Monday’s city council meeting … please bring a video camera.

As stated previously, I plan on using the full five minutes of my non-agenda speaking time to offer a heartfelt homily on something or the other as yet undetermined. It will tug the heart, tease the brain, induce laughter in the gallery and offer the council president the irresistable opportunity to gavel me away from the podium and exact his revenge. It would be nice to have such a moment captured on film and displayed prominently on this page.

In fact, for so long as Coffey’s latest outrage goes publicly unaddressed by his trembling political peers, I suggest that as many of us as possible attend and be prepared to speak. After all, there’s no such thing as too much information, is there?

Has anything changed, Pat?

During the first city council conclave of 2009, Dan Coffey was elected as president against token opposition, which is to say none, these vital matters commonly being determined in back rooms that formerly were smoky, before the health fascist jihads of the present era, and with words like “democratic” and “contested” seldom required as modifiers.

Coffey represents the 1st council district, which he congenitally insists is ignored by the city’s power elite. Unsurprisingly, he has never explained why nine dynamic years in office have not brought about certifiable gains to his neighborhood. This strange absence of progress may have something to do with Coffey’s own council-side manner … but I digress.

As president, Coffey succeeds 6th district councilman Jeff Gahan, himself a three-time wielder of the magic gavel, and to whom Coffey was joined at the political hip for much of the latter half of 2008, presumably owing to an alliance of expedience on the part of otherwise disparate political entities, both transparently desirous of a larger stage upon which to perform, sharing a stubborn impatience with those who display the impudence to object, and harboring the potentially catastrophic belief that one can manipulate the other.

In essence, Coffey is council president because Gahan finds it useful, and while Gahan perhaps believes that Coffey genuinely has something to offer the city, he may also have acquiesced with Machiavellian intent to position Coffey for a damaging fall. Either way, the events of Thursday, January 15 are sufficient for us to question both Coffey’s suitability for office and Gahan’s political judgment.

Considering Coffey’s boorish and unstable behavior at the conclusion of the meeting, first inside the council chamber and then later at a local licensed establishment, the admonition recently scrawled above the decaying urinals at the Luddite Bar & Grill is sufficiently prescient to apply to Gahan:

“Lie down with dogs, get up with fleas.”

Full disclosure compels me to proudly acknowledge that both Mark Cassidy and Jeff Gillenwater are longtime friends, the latter joining me and others as plaintiffs in the redistricting case mentioned here. Furthermore, it should be noted that I did not personally witness the events described, although I’ve spoken to individuals (other than the preceding) who were there.

That said, it is hardly in keeping with established council protocol for Coffey to imperiously jeer and then abruptly terminate the well-intentioned efforts of a fellow citizen – a fellow taxpayer, no less – to address the council during the public speaking period allotted for comments on non-agenda items, a periodically entertaining feature added to the biweekly agenda for the express purpose of giving people the opportunity to, yes, address the council.

Hectored citizen Cassidy came before the council and waited patiently for the opportunity to read a prepared statement and ask a simple question: Does the current legislative aggregation have any intention of doing its Constitutional duty to draw fair electoral districts by lawfully redistricting for the first time since 1992?

Cassidy, a non-partisan volunteer on the redistricting committee formed by the council last year at the behest of a federal court judge annoyed by the council’s sloth, politely endeavored to ask this question, but Coffey – whose job description presumably includes an obligation to uphold procedure and decorum – argued with Cassidy and gaveled him down, reverting to the serial distemper that Coffey oddly believes his fellow New Albanians should view as statesmanlike.

But flagrant abuses of authority are seldom confused with statesmanship, and now we must contemplate the latest in a series of red flags warning New Albanians that the voices emanating from Coffey’s interior political world plainly render him unfit for office.

Coffey inhabits an eerie Hieronymus Bosch landscape filled with mysterious conspiracies, withheld information and unfathomable daily slights emanating from people and ideas he cannot begin to grasp, and he comprehends only two poles of reference: Himself, and the enemy – or “them people.”

Accordingly, the story resumes after meeting’s end with Coffey’s verbal and physical harassment of another, entirely different citizen in Studio’s, the fine downtown eatery and bar on Main Street.

There, surrounded by witnesses numbering at least one fellow council member and various other public officials as well as ordinary pub patrons, Coffey initiated a heated discussion with Gillenwater that ended with Coffey aggressively grabbing Gillenwater by the shoulders and vowing to be “like a copperhead” and to “strike when you least expect it.”

In case you’re wondering, here is the definition of assault:

A crime that occurs when one person tries to physically harm another in a way that makes the person under attack feel immediately threatened. Actual physical contact is not necessary; threatening gestures that would alarm any reasonable person can constitute an assault.

It is incredible, shameful and indefensible. New Albany’s council president refused to permit a citizen to speak during the time allotted for it, and then both verbally and physically accosted another citizen in a public place. Is there any better example of the New Albany Syndrome than Dan Coffey’s skewed perspective of “leadership,” as manifested by these lamentable outbursts?

Aren’t they primal screams, not the sagacious deliberations of a paid public servant?

Can any member of the council excuse Coffey’s bad acting?

Can any of them deny that he continues to make New Albany the laughing stock of the region, thwarting the efforts of so many people to invest in the city’s future and revitalize the municipality?

Can any council member refute that Coffey’s most recent meltdown tars each and every one of them with the same degrading brush?

How can Coffey’s fellow council persons sleep at night knowing that they have empowered him with an office that he is unable to exercise responsibly?

I’m thinking of one of them in particular.