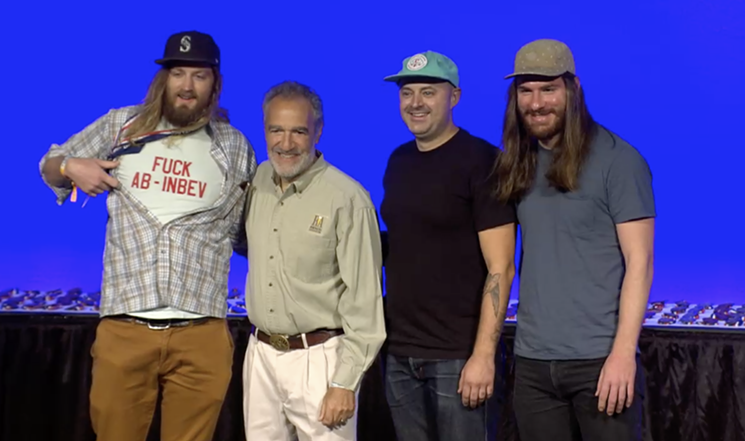 Thanks to JH for the link.

I’ve loathed Anheuser-Busch (later AB-InBev) for so long that I couldn’t begin to specify an anniversary date. Apparently the Pour Fool has, too, and in this snippet he offers partial explanation.

TRY to get this straight: The ONLY corporate interest about which you need to have ANY worries as a buyer or partner of a craft brewery is Anheuser Busch, aka AB/InBev. PERIOD. They are the only corporation on the face of the planet which combines the toxic mix of the arrogance to truly believe that we don’t need and shouldn’t be allowed to have any choices available to us in beer with the arrogance and deep enough pockets to think that they can really, literally set about pursuing a strategy that will force all of us who drink craft beer back into being just peachy with a lifetime of mindlessly, soullessly swilling tepid, watery adjunct lagers and nothing else.

Oddly, the particular brand of American beer I despise the most is not manufactured by AB-InBev, although this isn’t particularly relevant at the moment.

Meanwhile, here in Nawbany it is Harvest Homecoming, our annual autumn street festival. This weekend there’ll be hundreds — nay, thousands — of natives and visitors cranked on vile liquids like Bud Light and Michelob Ultra.

Over time, I’ve learned to ignore the carnage … mostly.

After all, few folks in the beer business locally have been in the position of working in an AB-InBev-free environment, as I did at NABC all those years.

It was sheer bliss of my own inspired creation, and we proved that it wasn’t necessary to pander to low common denominators. Nothing lasts forever, but it was great fun at the time, and now I/we move on.

As for that guy at the Great American Beer Festival: you rock.

So, about that T-shirt … by Josh Noel

A chuckle rippled through the craft beer industry a couple of weeks ago when one of three people to accept a Great American Beer Festival medal on behalf of Seattle’s Cloudburst Brewing used his 10 seconds of fame to unbutton his flannel shirt and display a salty sentiment to the crowd, both in the auditorium and those live streaming the event at home.

In red letters, below a mischievous grin and a Seattle Mariners cap, his white T-shirt read:

While the identity of that scalawag made the rounds — it was Cloudburst founder Steve Luke — what slipped past most people was Luke’s background: he worked for Elysian Brewing when that brewery sold to Anheuser-Busch (the American subsidiary of the world’s largest beer company, Anheuser-Busch InBev) in 2015. He wasn’t simply a passive observer.

An informative interview follows, including this main point.

Q: It’s interesting you say that about being “the little guy” because there’s this quote from Felipe Szpigel, who runs Anheuser-Busch’s craft portfolio, that made it into Chapter 30 of the book, where he very directly refutes that notion: “The concept of big versus small in craft is both old and unrealistic. There have never been so many beer options available to consumers, and that’s great. Consumers, just like retailers and wholesalers, have options. From our perspective, our focus is on celebrating, and amplifying, the beers, brands and cultures we have in our craft portfolio to provide great options to enjoy. We welcome all the brewers and cider makers that are focused on consumers and sharing amazing beers, ciders and experiences, as we are.” What do you make of that — the idea that there’s no such thing as big and small craft breweries competing anymore?

A: It shows me how scary good they are at bending the truth and blurring reality. A lot of what Felipe says, especially the second half of that statement, is a shared sentiment with small, independent craft brewers. But the story and reality of big versus small is alive and well, and will be forever. As a giant, ABI has the financial resources, the scales of economies, the vertical integration of ingredients, and the deepest of distribution networks that no small brewer will ever have. With those advantages, ABI has the ability to undercut every player in craft beer at a moment’s notice — and they do! They do this in every market, on the shelves and in bars. Their focus behind scenes is on choking out the beers, brands, and cultures of craft brewers — not celebrating and amplifying them.