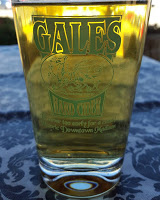 As I noted earlier in the week, the draft lineup at Pints&union had been allowed to expand to all ten taps even though one of these spouts always had been intended for locally produced cider — when available.

Availability is now, so today we welcome Extra Aulde Gale’s Scrumpy Cider “Liam’s Hill” from the Thomas Family Winery for an extended seasonal run at Pints&union.

It replaces Weihenstephaner Hefeweissbier, which will return on draft when the weather warms next year. For those of you who’ve come to like the Weihenstephaner, 16.9 ounce bottles are being kept in stock.

The origins of the word scrumpy are unclear, although they’re all synonymous with the British countryside, particularly in the West Country (Devon, Cornwall, Dorset and Somerset), which is considered the scrumpy heartland.

Various origins of the name have been proposed. The Oxford English Dictionary, which finds the term first used in 1904, derives it from the noun scrump, meaning something withered or dried up, specifically apples. Other claimed derivations include a noun scrimp with the same meaning, derived from a verb scrump, meaning to steal fruit. Neither of these meanings is attested in the Oxford English Dictionary, and the English Dialect Dictionary confirms the existence of a word “scrump” applied to “anything small or undersized”, particularly apples, and notes a related word “scrumpling” for a small apple. It can be applied to basic home made ciders as well as to commercially produced and marketed varieties.

In our contemporary times, scrumpy can be taken to imply a small batch, traditionally produced farmhouse cider. It’s generally drier, stronger and more tannic. In Southern Indiana, we associate it with the countryside around Madison, Indiana, because that’s where the Thomas Family Winery is located.

Scrumpy will be served at Pints&union in 16-ounce portions for $6, and our supply should get us through Thanksgiving at the very earliest.

For those who may be unaware, Thomas Family Winery is as much about apples for cider as grapes for wine.

My Grandfather Gale Thomas began making “cider” in his youth during prohibition. It was made in barrels, from craggy old cider apples, sold and drunk quickly. This tradition has passed to the third generation of his family. Today, the craggy old cider apples of yesteryear still grow in the Midwest. They are harvested, artfully blended, then ground and pressed. The cider is then put into old barrels, fermented and aged, crafting a strong, dry cider the old Celts would have been proud of.

You are advised to visit, and when you do, tell them Joe and Roger sent you.