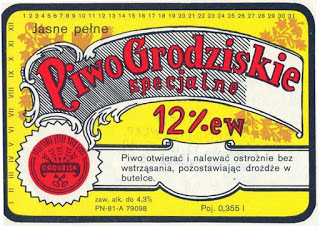 The first beer I ever drank in Poland was a lager in 1987 at a mysterious joint in Warsaw, located purely by accident, which defied all efforts to find a second time.

It was hot and humid, in the middle of the afternoon. I remember cutting through a neighborhood to get to the hotel, but at some point I heard male voices — and more importantly, the clink of glasses touching.

It was a pub of some sort. All I could fathom with any degree of certainty was that there was a building shaded by street trees, filled with men dressed mostly in work clothing, though a few wore suits – and they all were throwing back golden-colored draft beers in gorgeous fat mugs.

I was more thirsty than intimidated, and it was clear that Poles liked Americans. Entering the front door, I saw a serving counter and walked straight to it. No English was spoken, but a transaction was negotiated … once, and then a second time. I’d like to report that something novel and revealing came of it.

Nothing did, but at the same time, no one hassled me. I drank my beers in peace just like everyone else, and quickly found the hotel.

Actually I was missing out on more than just this neighborhood watering hole’s street address, although this fact wasn’t apparent at the time. What I was missing was Grodziskie: “The Polish Smoked Wheat Beer That Nearly Went Extinct.”

A 1914 description in ‘Bierbrauerei’ by M. Krandauer, posted by Ron Pattinson, gives a pretty good overall idea of the brewing process and what could be expected in a Grätzer of the time.

“3. Grätzer Bier, a rough, bitter beer, brewed from 100% wheat malt with intense smoke and hop flavor. The green malt undergoes smoking during virtually the whole drying process, is highly dried and has a strong aroma in addition to the smoked flavour. An infusion mash is employed. Hopping rate: for 1 Zentner of malt, 3 kg hops. Gravity just 7o [Balling]. Fermentation is carried out in tuns at a temperature of 15 to 20oC. Since the beer in the tun, as a result of the expulsion of great quantities protein and resin, doesn’t break, it is mixed with isinglass and pumped into barrels. After two or three days it is completely clear and ready to be filled into delivery casks or bottles with the addition of 2 to 5% Krausen.”

The mere sight of the words “oak-smoked” conjures a visit from Pavlov’s mutt. Back in 2012, the brew team at NABC took a stab at it.

Ben Minton will be brewing another new historical re-creation session beer this week. We recently acquired a small quantity of oak (eiche) smoked wheat malt for this beer. The beer will be 100% wheat, something we’ve never done here, and it will be a very hard beer to brew. If you see Ben pulling out his hair, this is why.

Here is an overview of the style.

Grätzer/Grodziskie … Grätzer is actually indigenous to Poland, where it was known as grodziskie. Grätz was the German name for the town Grodzisk, which was, for a little over a hundred years, part of Prussia. But the beer style both pre- and post-dated Prussia, and was in fact still brewed in Poland until the 1990s. Grodzisk was a major center of brewing, and at the end of the 18th Century, boasted 53 brewers.

One of the famous local products in that old-school Beervana was a beer made entirely of smoked wheat malt.

Indigenous Grodziskie consumed on Polish soil remains a bucket list item for me, but it’s not the only “legacy” style with connections to Poland. Baltic Porter was the reason for my third visit to Poland in 2002 (I transited the country in 1989 during a train trip from Moscow to East Berlin, but didn’t stop over).

I included Krakow on the 2002 group trip itinerary to Eastern Europe so we could tour the Zwiec brewery, source of a fine (and elusive) example of Baltic Porter, which is a nebulous style touching on several brewing traditions.

Sometimes Baltic Porter is an appellation of seaside origin, but not always. In Michael “Beer Hunter” Jackson’s World Guide to Beer, he mentions a “Porter” still being brewed in the 1970s in the town of Martin, Slovakia — quite far away from the Baltic Sea.

Conversely, the New Albanian Brewing Company’s first batch of Solidarity Baltic Porter was brewed in 2005 within walking distance of water, albeit the Ohio River.

The Beer Judge Certification Program description for Baltic Porter indicates that top-fermented English-style Porters and strong Stouts may well have been the original impetus for dark beers brewed in places like Poland, Estonia and Finland, but German lager brewing techniques supplanted ale-making long ago.

My theory always was that those brewers kept the same basic recipe for Porter but switched to lager yeast and cool fermentation. Alcohol contents crept up, and these days some examples of Baltic Porter seem closer to Doppelbock, while others lean toward Imperial Stouts.

To me they’re all delicious, even if a tad different.

This great style is underrated everywhere … except maybe Poland.

On Polish bottles, next to the alcoholic strength, there is a second number at least as important to local drinkers: the percentage of sugar extract before fermentation, or degrees Plato. Like starting gravity—an awfully nerdy thing to put on a beer label—it’s a measure of wort density. American drinkers might wonder why that would be useful, since the alcoholic strength is right there next to it, and isn’t that the most important thing? But to Polish drinkers, that extract is a measure of richness, an indicator of boldness and body. If you want a big beer, you look for a big extract number; the rich and bitter Pinta Imperator Baltycki, for example, has an extract of 24.7 degrees (that’s a gravity of about 1.104, for you homebrewers).

The story about beer writer Michael Jackson inventing the category called “Baltic porter” is true, as far as it goes. He wrote that the classification “grew out of a series of articles I wrote in 1990, after a visit to Estonia.”

In my mind at this precise instant, I can imagine trays of smoked eel and pickled herring being paired with either of these polar opposites, Grodziskie or Baltic Porter.

For a late autumn/early winter week in Gdansk, I want them all.