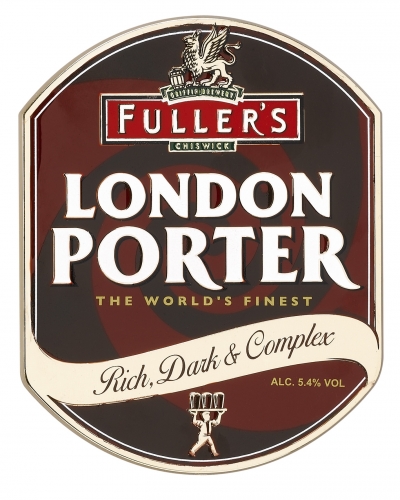 Many of you know it’s been an uphill struggle to keep draft Anchor Porter in stock at Pints&union. I take these matters seriously, perhaps too much so. In my previous career, tussles with beer wholesalers were the stuff of legend, and although I’m trying my best to curb my rants, it can be disconcerting to feel that so little headway is possible after long months pass.

But enough of that. Let’s look at a glass half full.

Lately I’ve returned to doing what always used to be necessary, which is going above the heads of wholesalers and speaking directly to importers and brewers.

As such, I’ve richly enjoyed working with the regional representative for Fuller’s, which is distributed in America by Paulaner USA. In no time at all, he’s been able to secure a promise from our wholesaler for more consistent shipments of Fuller’s London Pride draft into Indiana, which means we shouldn’t go through another two-month London Pride drought, as occurred in August a mere two weeks into Pints&union’s opening phases.

In turn, this fact has flipped the paradigm for Porter. Accepting that distribution logistics resemble theology, a discipline impenetrable to the ordinary human mind, the upshot for Pints&union goes something like this:

Joe Phillips and I talked about draft Fuller’s London Porter constantly during the pub’s planning stages, and it was our first choice; Anchor Porter was second, and after that, the deluge.

Consequently, I think you can see where this is going.

We’re both enthused and delighted to announce that until some other fundamental variable in distribution changes without warning, Pints&union will be adding Fuller’s London Porter on draft as a full-time pour, starting whenever the kegs begin arriving (late December or early January).

We’ll be stocking Anchor Porter in bottles once the draft runs dry. As we await the arrival of Fuller’s London Porter in kegs, the Anchor Porter draft slot will be used for a final remaining keg, then rotating Porters, with the exception (I hope) of a keg of Anchor Christmas Ale nearer the holiday.

I regret not being able to make good on draft Anchor Porter, which I adore, and it isn’t easy for me to admit defeat. However, it cannot be denied that Fuller’s London Porter is an excellent choice.

As London’s last remaining family brewer, we’re fierce defenders of the city’s tradition for porter beer. Porters boomed in the capital centuries ago, and though the style died out in the early 1900s, Fuller’s London Porter put it back on the map once again. Rich, dark and classically creamy, this is a beer with reach far beyond our capital. It has won awards right across the globe and is widely regarded as the world’s finest porter.

Brewed to 5.4% ABV, London Porter bears outstanding depth of flavour. The blend of Brown, Crystal and Chocolate malts provide earthy character and creamy delivery, while hints of coffee and chocolate carry through onto the tongue. The range of flavours works well with a wide variety of foods, from rich meat dishes to chocolate puddings.