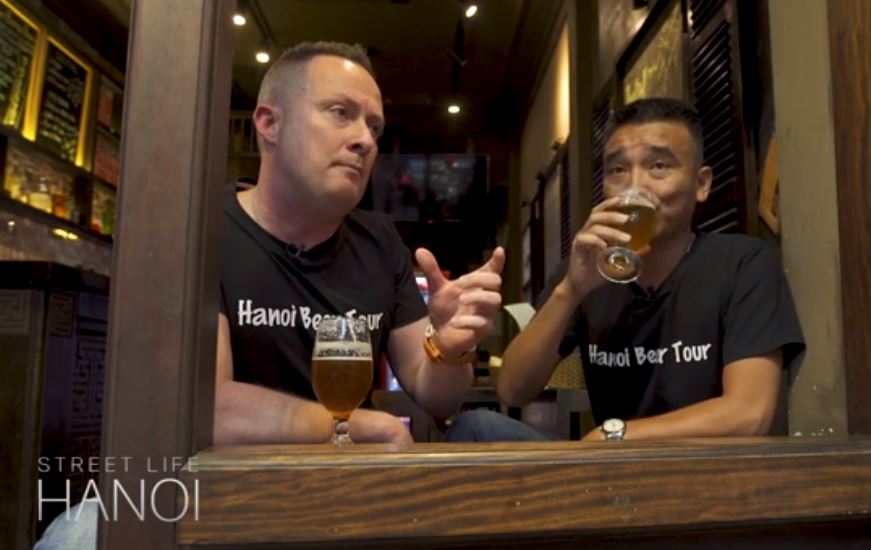 This exercise in seldom recall is dubbed “beer with a socialist,” and it’s time for free association. Seeing the CNN video about “street life” in Hanoi (and beer) gives me the excuse to insert a Roxy Music video … right here.

Back to Hanoi, there’s something to softens this travel-crazy curmudgeon’s heart: cheap beer, out on the avenues, with plenty of street life.

… It wasn’t until the late 1950s that bia hoi was introduced as an affordable options for everyday citizens. A brewery opened on Ta Hien Street, selling the fresh lager at just a few cents a mug. This local staple is a light and refreshing lager, with an alcohol content of less than 3%.

The idea? You can drink it for long sessions to cool off after working all day in Hanoi’s sweltering temperatures.

“Some will actually say it is ‘instant beer’ like instant noodles, since it is made quickly and sold quickly,” explains MacDouall.

“The alcohol content is low and that was because people wanted to consume it rapidly.”

Over the years, countless bars and restaurants have populated Ta Hien Street, bring with them swathes of tiny stools and metal tables that flank both sides of the sidewalk.

Love it, love it, love it. What appeals to me the most is the non-pretentious authenticity of it. In turn, this is why so much of American “craft” beer leaves me cold these days.

I’m going to use Sun King as an example at this juncture not because there’s any animosity, but simply because this link arrived earlier today via an e-mail news aggregator.

Be aware that I’m a fan of Sun King, especially the brewery’s everyday classics (Cream Ale, Pale Ale and Scottish Ale) and it’s not my place to suggest that beer fans refrain from chasing the white whales.

Don’t you know that you can count me out?

Special privileges, rare exclusivity, VIP areas at fests, and other anti-egalitarian maneuvers gripe my cookies. But rest assured that we’ll continue to vend Wee Mac at the pub.

Speaking of which, the keg of Bloomington Brewing Company Persimmon Ale I’ve been mentioning for weeks will be tapped soon. I’m eager to taste it. Here’s an interesting overview of the use of persimmons in brewing.

The Amazing Stories of Persimmons in Craft Beer, by Mark E. Lasbury (Indiana on Tap)

Poor and prominent communities alike in early America used persimmons to ferment an alcoholic drink. In this case, the persimmons alone were used, with the fructose in the fruit being a good source of fermentable sugar. It was called beer, but was really more like a wine, sherry, or liquor.

The fruits would be boiled in water for a good period, and then mashed to a pulp. Straining several times would yield a sugar containing liquid that might be supplemented with honey or sugar. Putting this in an open jug with some yeast allowed for fermentation, and more pulp or sugar could be added in more water to keep the fermentation going as liquor is poured off over the weeks.

Finally, following up on the demise of All About Beer, as mentioned here in mid-October. It appears that Chris Rice’s popularity has dipped almost as low as Donald Trump’s.

For 39 Years, Local Mag All About Beer Shaped the Craft Beer Scene. This Is How It Collapsed, by Michael Venutolo-Mantovani (Indy Week)

Editor John Holl first suspected something was amiss in the fall of 2016, when his boss—Chris Rice, the owner and publisher of the venerable Durham-based All About Beer magazine—told him the company would no longer use direct deposit, instead reverting to paper checks.

It was temporary, Rice assured him. Holl and his staff trudged along, resigned to the reality that print publishing is full of uncertainty, and maybe Rice just needed flexibility. But then, Holl says, Rice started asking him to hold on to those checks—to wait until the weekend was over, until the company was flush again.

Sometimes, Holl says, those periods stretched beyond the weekend. Sometimes Holl, managing editor Jon Page, and other employees waited as long as two weeks before getting the green light to cash their paychecks. Other times, they were told to cash them, and Rice would cover whatever fees they incurred if the checks bounced.

The troubles only mounted from there.