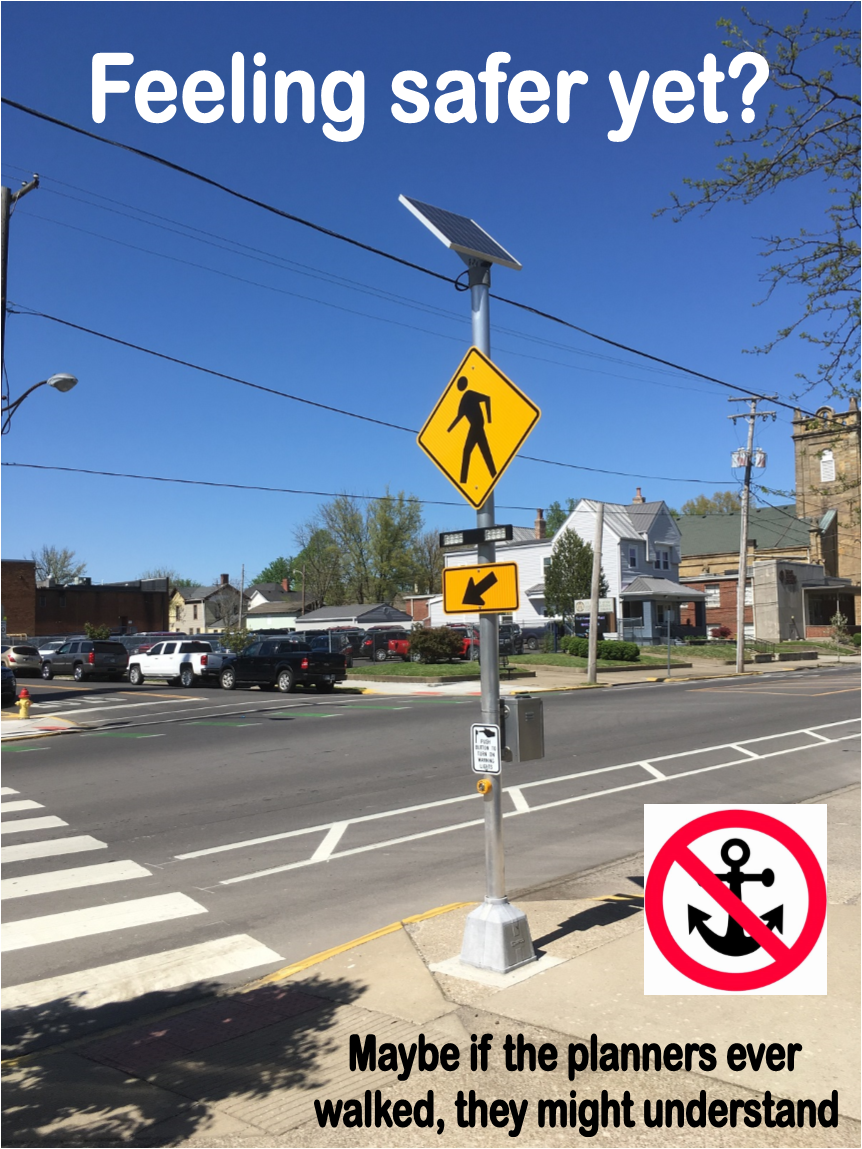 Marohn’s description (link below) of Wise Road in his hometown of Brainerd can be easily visualized in the context of Spring Street in New Albany.

Over a space of car-centric decades, Spring Street was engineered to be a highway zipping traffic through populated areas. The idea was to move cars from one side of the city to the interstate ramp on the other side, as quickly as possible.

Then it became evident that the goal of revitalizing neighborhoods was plainly incompatible with the continued use of this street as a highway. It took more than a decade to convince community pillars of this obvious fact, but finally a handful grudgingly did their homework and concluded something needed to be done — less about the design, more about silencing dissidents.

We know what happened next. Mayor Jeff Gahan took control of street grid reform not as a means of doing what was needed to slow drivers, but to loudly and garishly pretend he’d done so.

Traffic calming became another grandiose paving project, with the usual cash-laden fruit baskets passed around. Victory was declared, and yet of all the ways Spring Street might have been altered by purposeful design, only the barest minimums were deployed. Accordingly, we were urged to venerate politicians who’d “solved” 20% of the problem.

Does anyone really think HWC Engineering will conclude that the company’s Speck retrofit was fundamentally mistaken?

We don’t need a mayor who responds to every emerging situation by commissioning another taxpayer-funded study from the same old suspects, who promptly deposit tithes in the re-election fund before producing the pre-determined result.

Rather, we need a mayor who leads. As it stands, we have a vacuous cult of personality.

Strong Towns president Chuck Marohn lives just a few miles from one of the deadliest roads in Central Minnesota.

But no one in his town seems to be particularly worried about it. And we bet you have a road just like it in your town.

How have our communities become so apathetic about the deaths of their citizens? And more importantly, what can we do about it?

Today, Chuck is taking a hard look at Wise Road, and using it as an object lesson for breaking through the inertia around traffic deaths.

It won’t be easy. There aren’t many options—according to Chuck, there’s really only two. But it’s the hard work we need to do if we want our towns to be strong.

How will you help #slowthecars?

-Kea and the rest of the Strong Towns Team.