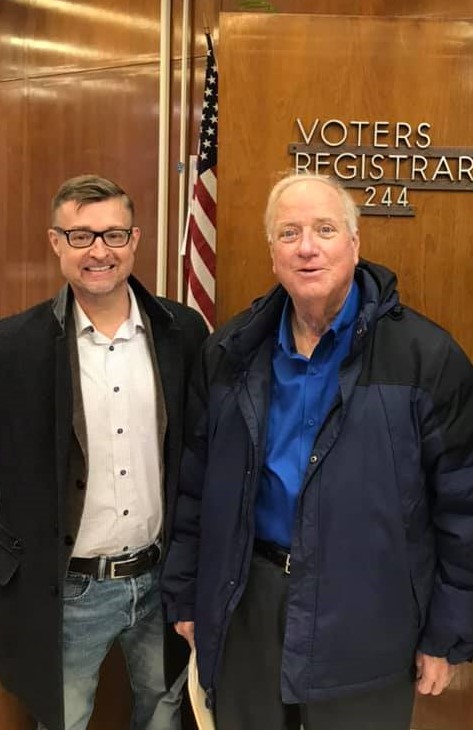 I stopped by Kolkin Coffee today to observe the scene as the Floyd County Republican Party rolled out its slate of candidates for municipal elections in 2019.

Therein lies an 800-lb incongruity, which is a concise way of saying something is “out of place or keeping.”

Seabrook said during his short speech Friday afternoon at Kolkin Coffee shop in New Albany there needs to be more transparency in city government and that the Gahan administration has wasted taxpayer money on projects, singling out the current rehabilitation work on the old Reisz Furniture building for the new city hall. He also criticized Gahan for not working with county leaders during his two terms.

Standing four feet away from Seabrook was Very Incongruous Barksdale, who garnered nowhere near the level of applause given the others.

His presence proved a bit strange. If the GOP intends to cite the Reisz Mahal as a prime example of Jeff Gahan’s debt-laden waste — and this is entirely true — then why did Barksdale, one of the party’s three council incumbents, provide THE critical vote to move the boondoggle forward?

Just remember that when it comes to manipulation and money, the mayor can be trusted to exploit the weak and vulnerable by finding and tapping their jugulars. Gahan simultaneously milked Barksdale for a crucial fifth Reisz Mahal vote and neutered a Republican. The historian blithely handed the charlatan power on a silver platter.

Barksdale’s abrupt collapse might be sad, except it’s all hamartia and hubris to to me: “Hamartia is the (fatal) flaw, hubris is the behavior that does not acknowledge it.”

Apart from Barksdale’s capitulation to Dear Leader — can he be redeemed? — it’s a fine and balanced slate, surely the deepest we’ve seen from the GOP since this blog’s inception.

NEW ALBANY — The Floyd County Republican Party candidates for city offices in 2019 want residents to know they will always listen to their concerns. Their ears, and doors, are always open. That, they said, has been missing in the last eight years from Mayor Jeff Gahan and other elected Democrats.

“We will listen,” Mark Seabrook said. “We will listen to every citizen. The days of a city administration going it alone will be over. We want the community involved and we want to make New Albany the best it can be. Being the best New Albany can be is what this campaign is all about.”

Floyd County Republican Party Chairman Shawn Carruthers said he is “very happy” with the slate of candidates, which can still grow before the filing deadline of Feb. 8.

“We have a diverse group of people who are talented in all aspects of industry,” he said. “There is a lot of energy in the room.”

Carruthers said Republicans enjoyed great success in the county-wide election last year, and he believes that momentum will carry over to this year.