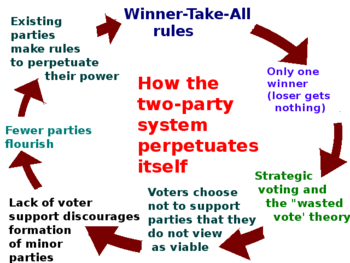 Fact is, 800,000 unpaid federal workers are being held hostage not by one man, but by America’s wretched two-party system. In any other facet of our lives, being given a “choice” between two options would be laughable, and yet we continue to accept one or the other of two entities that both suckle the same teat of accumulated wealth for sustenance.

Want to be independent? I hate to be a buzzkill this early in the year, but first, you have to think independently.

Those of you hugging the Darwinian ledge on the far right side of the aisle, who currently chortle with glee at the prospect of at last achieving Saint Grover Norquist’s cherished wish to drown government in a bathtub, are displaying even less empathy toward fellow human beings than usual — which is saying something.

You’re seemingly fine with expediently eliminating “non-essential” jobs by starving job holders, when the jobs were created by … wait for it … the two-party duopoly. Can you explain to me why this process cannot be a process, rather than collateral damage suffered by de facto hostages, and for a reason (a wall) that has nothing whatever to do with your “small government” mantra?

Doesn’t it contradict this mantra?

My friend Amanda wrote at Fb. My boss Joe was spot on: enough is enough.

So today my husband- the FBI agent one who is currently working without pay- was told if we miss another paycheck due to the shutdown we lose our vision and dental insurance. Yeah.

I phoned my congressional representatives Senator Young, Congressman Hollingsworth and Senator Braun. I’ve emailed them before. This time I invited them to dinner.

Not one of them seems to care about out situation. Nor do them seem to want to respond to me or my family, their constituents.

If you can, give them a call & tell them your displeasure in their inability to even call or email back those of us who are affected by their actions. You might want to throw in that they need to do their jobs when my husband is doing his without pay. Their phone numbers are below. Let them know Amanda Beam sent you.

(And please be nice to those answering the phone. Sen. Young and Rep. Hollingsworth’s staff were very kind and did a great job. I even told them to go grab a beer. Sen. Braun’s assistant made ME want to grab a beer.)