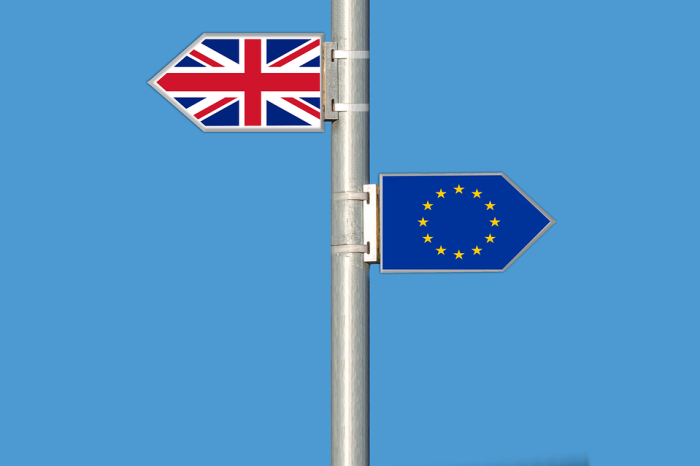 Over at The Economist, which currently is editorializing on behalf of a second Brexit referendum, a “great rescrambling of Britain’s parties” is viewed as being underway.

PEOPLE HAVE been talking about the collapse of the British party system for decades. Now it may actually be under way. The government has lost its authority. Parties are dissolving into factions. Factions are forming left-right alliances. Backbenchers are seizing the limelight while frontbenchers are hiding in the bushes.

That’s because the Tory and Labour parties seemingly are split in two on the topic of Britain’s departure from the European Union, with factions in each party both for and against.

It’s far too deep a topic for quick analysis, but while the political situation in Britain and America isn’t altogether analogous, it isn’t far-fetched to suggest that we’re both on the verge of a political realignment reflecting the final disintegration of the post-WWII settlement.

For those having a difficult time imagining how a British leftist can support Brexit — specifically, the “no deal” Brexit feared by many of his or her countrymen — please follow this link.

Why No Deal Is the Real Deal: Brexit and the Politics of the Interregnum, by Maurice Glasman (The Nation)

Leaving the European Union is the necessary goal of the left in Britain.

The defeat of Theresa May’s government this week by an unprecedented margin in an alliance between pro-Remain Labour MPs and no-deal Tories opens up a fraught 10 weeks in British politics. The clock is ticking toward March 29, when, deal or no deal, Britain will leave the European Union. Having lost a crucial vote by the highest margin in a century, on the following evening Parliament returned a vote of confidence in her government. These are unusual times.

In the House of Lords, barons and baronesses of the Labour movement ask me to sit down and explain how “anyone” could support Brexit. After half an hour and a cup of tea, they shake their heads in sorrowful incomprehension and drift back to their old friends. Bearing in mind that you may well agree with them, here is why I believe that leaving the European Union is the necessary goal of the left in Britain—and why staying in would doom us to a never-ending Clinton presidency in which the rich get richer and all change is good, unless it leads toward socialism. A progressive eternity of democratic impotence.

The European Union is the greatest capitalist project ever devised by the human mind. It guarantees, in treaty form, the free movement of capital, labor, goods, and services throughout its territory as a constitutional right. These are known as the “Four Freedoms.” Imagine NAFTA underpinned by a political union so that it would be illegal to resist capitalism. A union in which economic policy is decided not democratically—but by judges interpreting whether the policy is “treaty compliant.” Yet that is the institution supported by the vast majority of progressives throughout the continent—and the main cause of the palsy that has overtaken social democrats across Europe. They think political and economic liberalism as the legal form of globalization is the best you can hope for. That is the European Union.

Whenever the left cannot make the distinction between globalization and internationalism, or democracy and populism, it loses working-class support in an orgy of legalistic self-righteousness. Give up on the democratic resistance to the domination of capital, and the meaning of socialism becomes obscure to a lot of people. The stakes are high in the Brexit impasse precisely because the working class has not been cowed by academic disapproval, editorial condemnation, or managerial contempt. The “basket of deplorables” have not given up on the idea that a democratic, self-governing nation is a better bet than the European Court of Justice. They are not changing their minds …