It’s a very simple question: exactly how can Flat12 in Jeffersonville be considered a brewery?

Asking this very simple question isn’t to be construed as a knock against Flat12. I like some of Flat12’s beers, and I enjoy drinking beers at their riverside taproom. What I like far less is journalistic inconsistency, hence my question. As an aside, be aware that I’m not directing this query to Kevin Gibson, a free-lancer who gets beer right and doesn’t make editorial decisions.

According to LEO Weekly, which lately fancies itself a Louisville-area craft beer authority, Flat12 in Jeffersonville is a brewery.

There are few better ways to celebrate the solstice than a nice warming beverage to help keep the night at bay. From black IPAs to hearty stouts, there are a host of options, spiced, smooth or otherwise, to cheer you up on the darkest days. As the brewing community grows here, so does its variety, including collaborations with several coffee shops in town, including Sunergos, Quills and Heine Bros. From dark brews to holiday specials, our Louisville breweries have you covered.

Flat12 Bierworks
Dan Patch in a Pear Tree
By far the most ambitious beer on the list, the Dan Patch in a Pear Tree, is a pear-flavored seasonal with a nice pop on the front end. A light body capped with a faint white foam lace, this is much lighter than many beers typically gravitate toward in this season, but it’s a wonderful diversion as such. Yielding a 4.7 percent ABV and 12 IBU, this is an imminently sessionable beer, perfect for sharing. The fruited flavors are never overwhelming, instead they form delicious and ephemeral moments that creep in occasionally.

MORE ON TAP: Flat 12 Bierwerks to run brewery alongside taproom, by Elizabeth Beilman (News and Maybune)

Just weeks after Flat 12 Bierwerks announced it would open a taproom in Jeffersonville, the company decided to expand operations to include a fully functioning brewery on site.

Sean O’Connor, CEO of Flat 12, said the brewery will make “more than a couple” beer varieties, many that will be unique to Southern Indiana. The facility will have the capacity to brew at least 40,000 barrels of beer per year, which could be more than the amount made at the Indianapolis brewery. For most brewers, a barrel is equal to two kegs, or 31 gallons.

The taproom finally opened in 2016, but the brewery never came about.

The Jeffersonville taproom exists without making beer much in the same way that Tin Man-Kokomo existed with Tin Man Brewing in Evansville before the original brewery dissolved into Falls City Beer under the ownership of their Neace Ventures owner.

Flat12 in Jeffersonville was not included in an ownership change announced earlier this month, which concerns only the original Indianapolis location.

The Flat12 team is excited to announce we have changed ownership, as we welcome Books & Brews owner, Jason Wuerfel, our new CEO.

The Flat12 production team, led by our Head Brewer, Sean Lewis, has been contract brewing Books & Brews’ beers for the past two years, so it was a natural move for our organizations to join forces. Aggressive adaptation is necessary in this increasingly competitive craft beer landscape, and the move will allow both of our companies to continue to produce the beers, events and ambiance our consumers have come to love.

There already had been an ownership reshuffle at Flat12 in 2016, occurring after the 2014 Jeffersonville brewing expansion was announced — and did I mention that brewing by Flat12 never took place in Jeffersonville?

In 2015, I started looking for a business here at home that I could own which would allow me to strengthen my community ties. The opportunity to buy Flat12 came in late 2016, and I jumped on it.

At some point during the process of Teed taking control of Flat12, co-founder and Indianapolis resident O’Connor relinquished his ownership share of the mother ship, but retained the Jeffersonville taproom.

Where brewing never once took place. 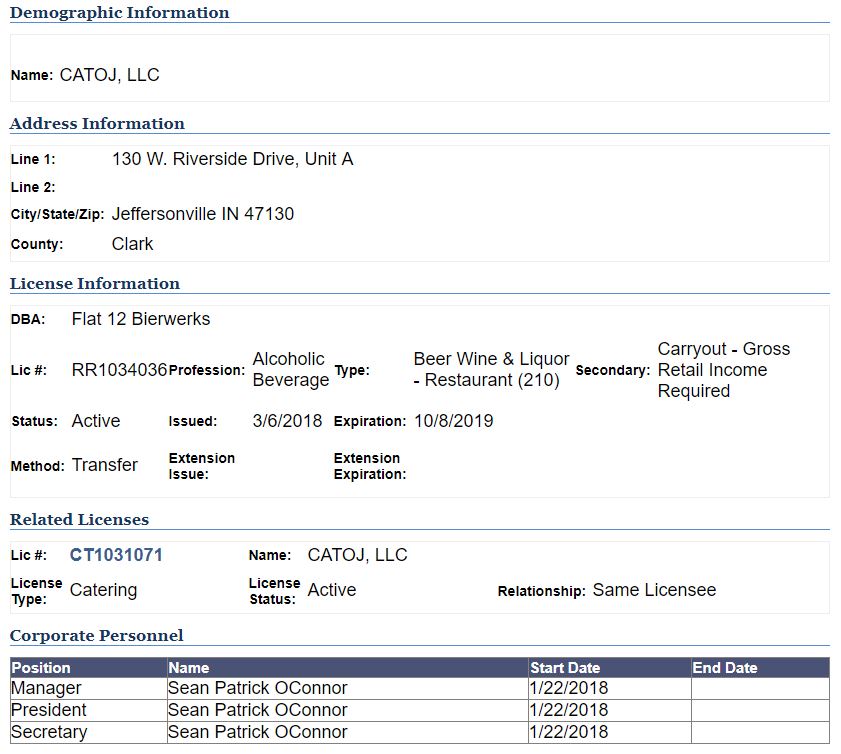 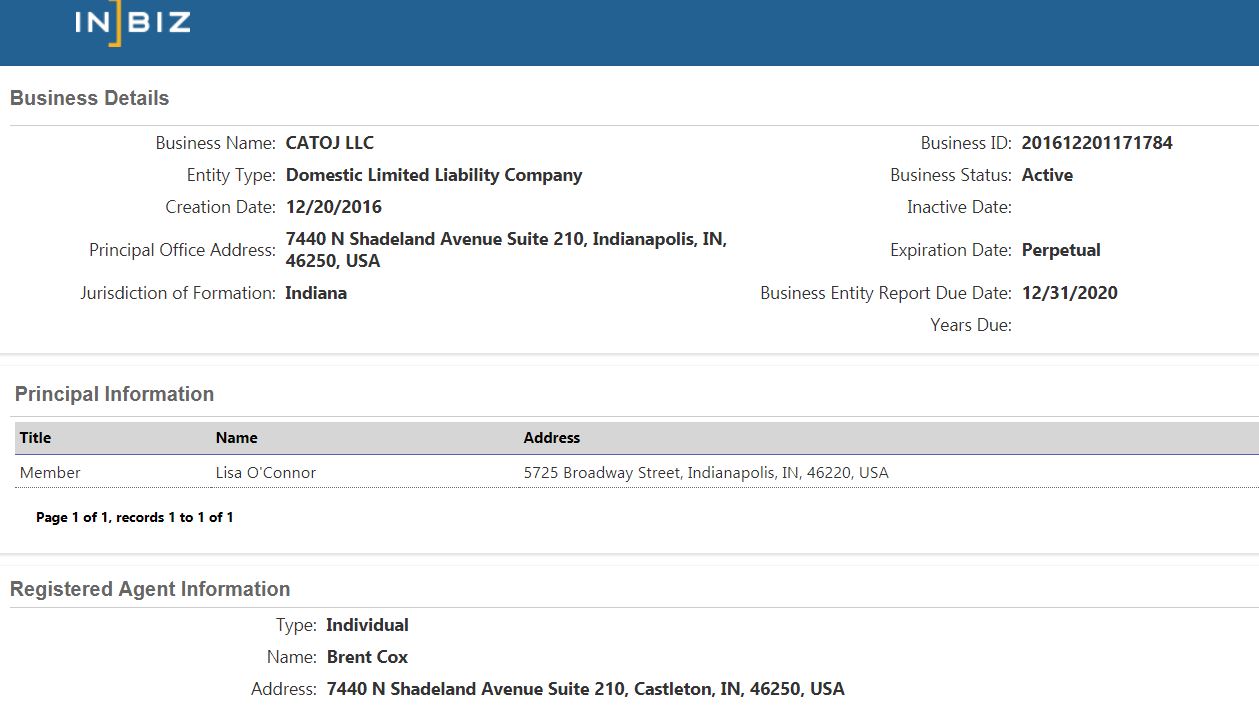 All this and LEO Weekly persists in describing Flat12 not only as a brewery, but as a “local” brewery, when the owner lives in Indianapolis and there has not been a single batch of beer “brewed” on site by Flat12 in the city of Jeffersonville, ever.

So, how does LEO Weekly define “our Louisville breweries”?

What a glorious time to love beer! The Louisville region, including Southern Indiana, has 21 breweries, including 19 locally-owned breweries. Don’t be overwhelmed by the number. Each has its own style, tastes and reasons to visit. That includes much more than the craft brews, as many brewhouses match their creative, award-winning suds with inventive, delicious food. We’ve been to all 19 of our homegrown beer-makers more than a few times, so here is the 411 on where to go for what.

Absent any clear reasoning or coherent criteria, the definition still should be easy: if brewing takes place there, it’s a brewery — right? Hence LEO’s list of 19 “homegrown beer-makers,” which seems not to count multiple brewing locations, as with Against the Grain, New Albanian and the like.

Except make that 18 — because Flat12 isn’t homegrown and doesn’t brew, meaning that Gordon Biersch — which isn’t homegrown but does brew in Louisville every drop of Biersch-branded beer it sells in Louisville — belongs on the list according to at least one of LEO’s weirdly contradictory barometers.

Allow me to add that Biersch is excluded even though its Louisville brew team creates unique in-house recipes unavailable at any other Biersch.

Meanwhile, who’s the second of two non-local breweries? I suppose BJ’s Restaurant & Brewhouse in the Oxmoor Center, but of course everyone knows they don’t brew, because BJ’s just sells beers of its own, brewed somewhere else and brought to Louisville for tapping.


LEO Weekly has some homework to do, although for some reason I can already hear the excuse: Spuds McKenzie ate it.