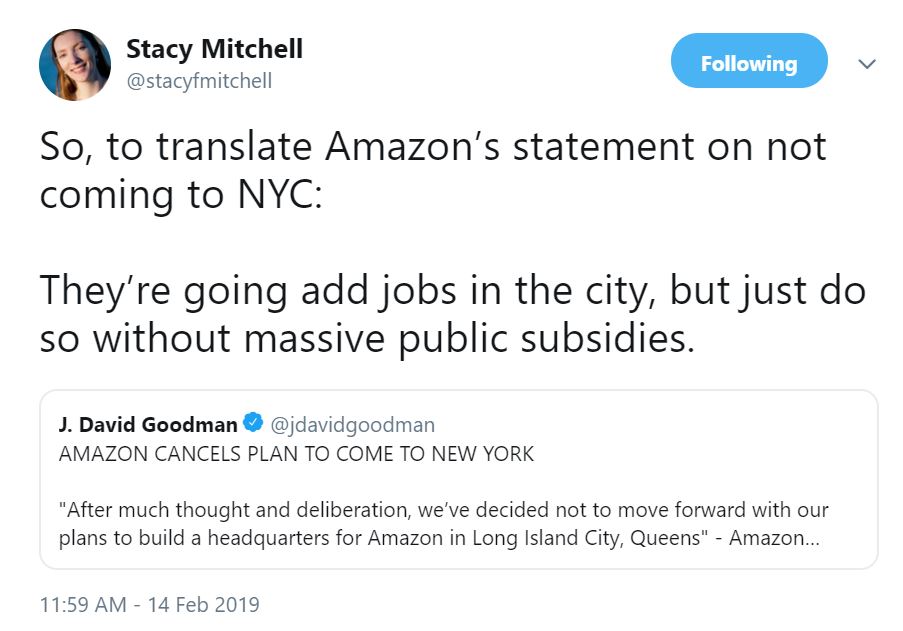 Just as I was reading articles about Amazon — opposition in NYC and the larger-scale damage done — news started arriving: Amazon Pulls Out of Planned New York City Headquarters.

United Black Front: “Amazon is the richest corporation in the world,” Zachary Lerner says in Long Island City. “There’s no reason that we should have ever considered giving $3 billion to this corporation to come to New York City.”

Every Billionaire Is A Policy Failure: Here’s the thing: Amazon is still perfectly welcome to build in NYC–always has been. They just have to give up the bullying. You can’t have a “positive, collaborative relationship” with a community if your terms are ‘pay our $3B bribe or we’re out.’

Consequently, this story is a tad obsolete.

“Can everyday people come together and effectively organize against creeping overreach of one of the world’s biggest corporations? Yes, they can,” says Rep. Alexandria Ocasio-Cortez

In the face of widespread and impassioned opposition from local politicians, progressive members of Congress, and ordinary New Yorkers, Amazon is reportedly having second thoughts about its plan to locate a second headquarters site in Long Island City.

“Can everyday people come together and effectively organize against creeping overreach of one of the world’s biggest corporations? Yes, they can,” Rep. Alexandria Ocasio-Cortez (D-N.Y.) declared on Friday in response to the news, which was met with glee by advocacy groups that have opposed the New York government’s deal with Amazon since it was unveiled in November.

“Bye, don’t let the door hit you on your way out,” wrote the North Brooklyn branch of the Democratic Socialists of America (DSA), echoing a sentiment that was shared across social media.

“Our community’s organizing is paying off! Let’s keep it going!” added Make the Road New York, a state-level advocacy group …

And why it matters.

When Amazon recently closed its books on 2018, it made headlines with a third straight year of record-making profits. However, a new exclusive analysis from Civic Economics and the American Booksellers Association makes clear that the titanic growth of the world’s most valuable public company has resulted in as-yet-unrecognized loss and stagnation for America’s cities, towns, and local communities.

Reviewing the most recent four years of Amazon’s U.S. retail sales, Prime Numbers documents that in 2018 alone Amazon and its third-party vendors sold $189 billion of retail goods. The report’s analysis reveals that the nationwide results of those sales were:

In contrast, Prime Numbers also documents the enhanced positive impact of locally owned, independent businesses for communities, as compared to both chain competitors and Amazon and its third-party Marketplace vendors.

Looking at the most recent numbers for the independent bookstore channel nationwide, the study reports that approximately 28 percent of all revenue of indie bookstores immediately recirculates in the local economy. This translates into a massive local impact advantage of 610 percent over Amazon (which recirculates only 4 percent locally) …