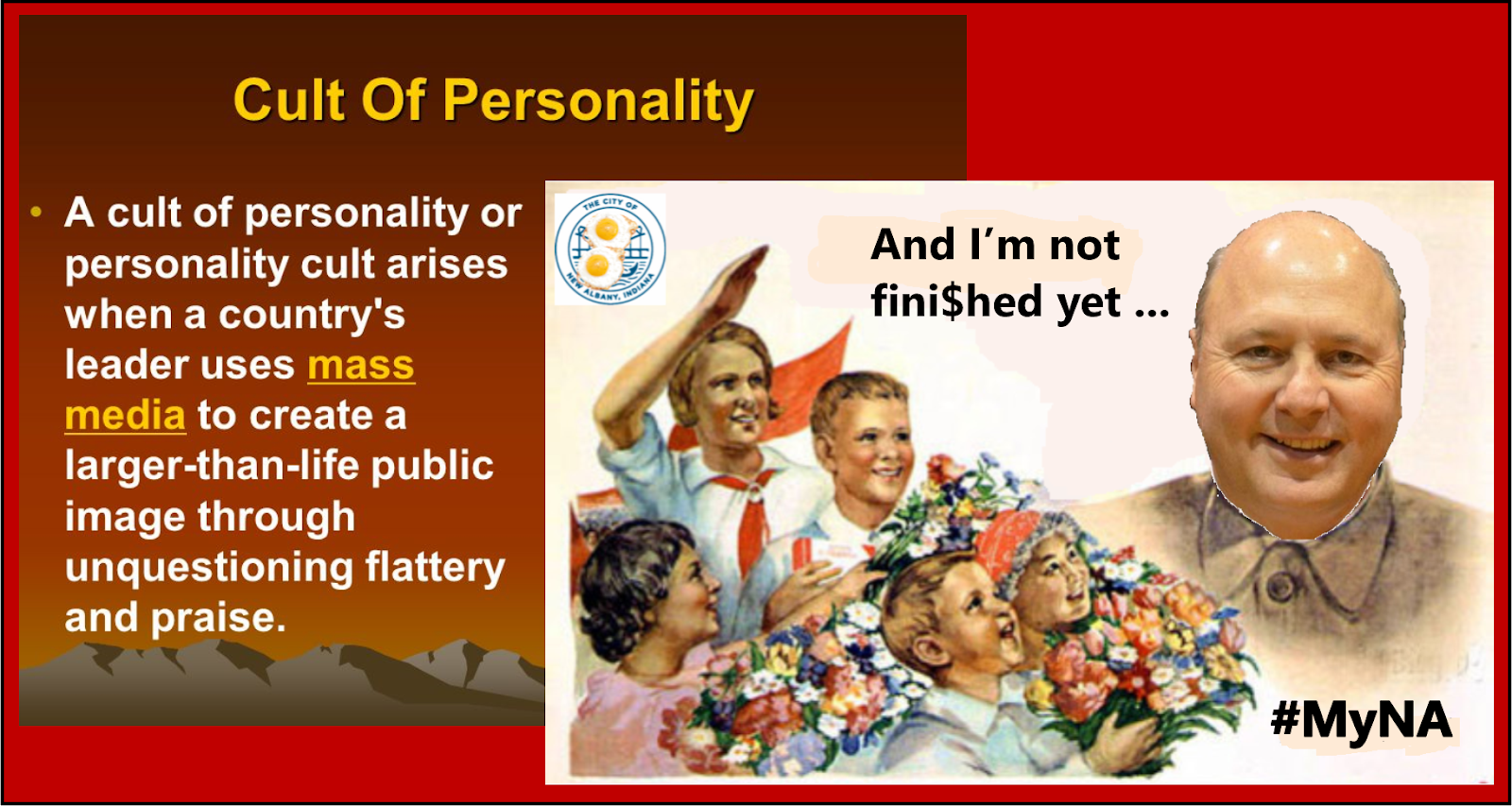 ON THE AVENUES SPECIAL: Take your cult of personality and shove it, Dear Leader.

So off went the Emperor in procession under his splendid canopy. Everyone in the streets and the windows said, “Oh, how fine are the Emperor’s new clothes! Don’t they fit him to perfection? And see his long train!” Nobody would confess that he couldn’t see anything, for that would prove him either unfit for his position, or a fool. No costume the Emperor had worn before was ever such a complete success.

“But he hasn’t got anything on,” a little child said.

“But he hasn’t got anything on!” the whole town cried out at last.

Jeff “Tsar of the Shopping Cart” Gahan has been branding the city in his own image and using our money to do it, but we need collective thinking, not the shoddy veneer of a personality cult.

Far more so than anchors, our foremost branding effort has been devoted to slapping Gahan’s cherubic chihuahua image on every last advertisement purchased with taxpayer dollars. An anchor keeps the boat from moving. Gahan keeps the city from moving, while grandly lubricating his own pockets with pay-to-play dollars from special interests.

And yet the absurd personality cult veneer is what we keep getting, again and again. Here’s a sampling.

January 18, 2018: ON THE AVENUES: During our State of the Gahanaissance Address for 2018, feel free to resort to hard liquor. I did, and will.

June 4, 2017: Scraping rock bottom: Jeff Gahan brings his cult of personality to Kroger shopping carts. But who paid for these political ads?

June 4, 2017: Shopping cart blurbs, magazine ads, billboards … and now the NTSPY Awards. How much of your money is Jeff Gahan spending on all this?

Let’s briefly re-examine the state of Gahan’s cult of personality with the assistance of actual facts from history. This column originally was published on May 14, 2015.

Human psychology is a nuanced and often bewildering topic, but it’s probably safe to assert that to some vague extent with interpersonal relationships, most of us want to be liked, and prefer being liked to being feared.

(Note that in this digression, I have no intention of trying to fathom what it means to be “liked” on Facebook)

Meanwhile, out in the real world, the devil resides fully within the details.

Getting along with people and being liked are two very different issues. To get along with someone requires that you figure out how to balance meeting your needs with that of another person until the two of you arrive at a resolution. Your best chances of being liked occur when you go along with the desires of other even if it means sacrificing your personal goals. To be liked means that other people have positive associations to you so that when they see or think about you, it’s with a mental smile.

What about if you don’t particularly care about being liked? You have a job to do, for example, that involves your making tough decisions that possibly cause other people to resent your or, at best, prefer to stay out of your way. When they think of you, it’s with an active sense that being with you will cause them more pain than pleasure.

If human psychology is a tangled wilderness of conditioned responses and primal screams, consider the genre of politics.

Politics (from Greek: πολιτικός politikos, definition “of, for, or relating to citizens”) is the practice and theory of influencing other people. More narrowly, it refers to achieving and exercising positions of governance — organized control over a human community, particularly a state. Furthermore, politics is the study or practice of the distribution of power and resources within a given community (a usually hierarchically organized population) as well as the interrelationship(s) between communities.

In the context of politics, which pertain to invasive concepts like power, control and authority, what does it mean to be liked?

Are our likes and dislikes personal, or professional?

Can politicians be inspiring, totemic figures, or do we merely tolerate them as a regrettable but necessary evil?

Longtime readers already know about my youthful travel experiences in Europe, and how these wanderings dovetailed with previous university studies in history, geography and philosophy, producing the opportunity to witness, albeit it briefly, the phenomenon of 20th-century communism in places like Czechoslovakia, Hungary and Poland.

At my point of entry in the mid-1980s, this political system didn’t have very long to survive, but of course this couldn’t be known at the time. During the post-war period in these places I visited, the theory and practice of communism actually was subject to change, though more often for reasons of ideology (and international power politics) rather than any natural evolutionary process.

I’ve told the story of Ladislav, with whom I became acquainted in Ostrava, Czechoslovakia in 1989. He was 65 years old, and had observed his country’s period of hopeful interwar democracy, interrupted by a devastating conflict, then followed by the imposition of communism by the occupying Soviets, and a subsequent four decades of historical entrapment.

Ladislav would have been just shy of 30 years of age when Joseph Stalin died in 1953, a termination which led to a brief period of communist reform and softening under Khrushchev.

Czechoslovakia’s own indigenous version of Stalin, a nonentity named Klement Gottwald, died of his excesses shortly after Stalin’s funeral and was replaced by Antonín Zápotocký, who gifted Prague with a huge statue of Stalin on a hillside overlooking the Vltava River.

Interestingly, the sculptor was so filled with remorse that he committed suicide prior to the unveiling, and the statue was dynamited in 1962 after a hopeful shifting of socio-political breezes.

It would be very hard to maintain the illusion than any of the men mentioned here were “liked” in ways we might fathom — not even by their wives and children, although perhaps by their dogs. And yet, they were obeyed, venerated and even worshipped in a political-cum-religious sense, surely out of fear, but also because they had erected and encouraged personality cults to reinforce their positions.

Khrushchev the successor pilloried Stalin for his cult of personality. Karl Marx, the philosophical father of them both, disdained the notion; after all, in a communal system, how could there be just one great leader?

Cult of personality is a pejorative term implying the concentration of all power in a single charismatic leader within a totalitarian state and the near deification of that leader in state propaganda. Totalitarian regimes use the state-controlled mass media to cultivate a larger-than-life public image of the leader through unquestioning flattery and praise. Leaders are lauded for their extraordinary courage, knowledge, wisdom, or any other superhuman quality necessary for legitimating the totalitarian regime. The cult of personality serves to sustain such a regime in power, discourage open criticism, and justify whatever political twists and turns it may decide to take.

Many Americans will scoff, dismissing these examples as unique, arising from diseased ideals amid peculiar historical imperatives, and taking place in the lives of other people, elsewhere.

Unfortunately, cults of personality are American, too, and can exist in a democracy just as easily as in a totalitarian system of government. George Washington was resistant to the notion, and Huey Long obliging. No matter the locale, certain themes in a cult of personality are constant.

➜ Manifestations of activity on the part of government also are promoted as inseparable from the leader’s benevolence, and while the leader may have utilized resources theoretically shared equally by his or her subjects, the results must always be portrayed as stemming from the wisdom of the leader.

➜ Mistakes never occur, and when they do, they’re never openly acknowledged even as minions pay the price.

➜ The leader’s pre-eminence is reinforced by the constant repetition of mass marketing, including the leader’s name and image as attached to almost anything lacking the good sense to move out of the way.

Contemporary electronic media surely assists the cause of building a leader’s cult of personality, but it must be remembered that the Roman Catholic Church was adept at pursuing the same strategy for its papacy long before electricity and the outsourcing of Twitter feeds.

Often during the quarter-century course of my own beer business, there was the temptation to indulge in precisely this sort of self-deification. I wouldn’t have been the first, and regrettably, I wasn’t immune to periods of relaxed vigilance, which are characterized by reading one’s own press clippings and believing what they say.

What kept me grounded most of the time was the simple realization that I was part of a team, and the daily efforts of the team resulted in satisfied customers, who returned and made possible the survival of the business. I played one role, and it was just that: One part among many, inter-related, and meaningless when separated from the whole.

Perhaps politics works somewhat like this, and perhaps it doesn’t, but either way, the very notion of a personality cult is deeply offensive to me. What’s more, the greater our proximity to it, the more indefensible a cult of personality becomes.

If functioning as an elected official means a stock photograph behind everyone’s desk, daily laudatory references, names on plaques and a ceaseless perpetuation of peerless wisdom, then the wheels officially have jumped the track.

Those of Ladislav’s generation in Eastern Europe and the USSR had no say in the personality cults inflicted upon them. Those of my generation in America have a ballot box. It’s an interesting tool, and when used properly, acts as kryptonite to the cult.

Just remember that, because very soon, you’ll have a chance to act accordingly.

February 12: ON THE AVENUES: If it’s about learning and knowledge, then by definition it’s a Gahan Free Zone. You’re welcome.

February 5: ON THE AVENUES: Our mayor hates non-elected boards — except when they’re his own, which is why “hypocrisy” is spelled G-A-H-A-N.

January 29: ON THE AVENUES: How has the 3rd district councilman fared since this question from 2015: “Et tu, Greg Phipps?”

January 22: ON THE AVENUES: Democrats should judge city council incumbents in districts 2, 3, 4 and 5 by their regressive deeds, not their progressive words.