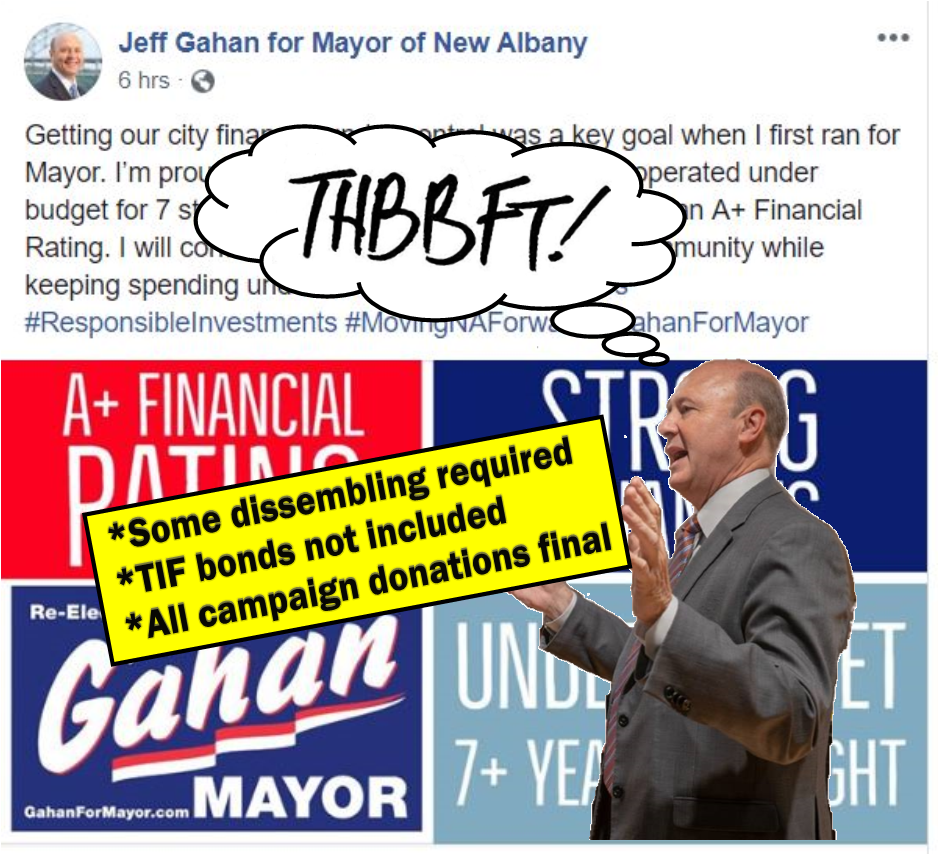 David White is running for mayor in the May 7 Democratic primary. I’m voting for him, and you should, too. Visit the David White for Mayor page at Facebook.

As a preface, we have all been here before. In the four months since NAC last commented about this, we’ve learned that New Albany Housing Authority funds originally earmarked for 1:1 housing replacements are being used to stockpile commercial properties. Indiana’s Board of Accounts is taking seriously the documentation of citizen activists living near Mt. Tabor Road (where’d that money go?), and the breathtaking extent of Jeff Gahan’s pay-to-play campaign finance donations has become at least partially apparent

But today a fresh and steaming new round of budgetary boasting was splattered on social media by the Genius of the Flood Plain’s outreachers, complete with Made by Tricky Dickey hash tags. It’s a minor miracle these lies didn’t originate with the City’s official feed, which typically (and wrongly) functions as an ill-disguised propaganda dispenser for the mayor’s whoppers.

In 2015, Jeff Gillenwater penned two incisive commentaries dismembering Gahan’s frequent (and spurious) claims to being the “balanced budget mayor.” They’re worth repeating as a rejoinder to Gahan’s dull repetition of false facts.

It should be added that since Bluegill’s thoughts were written in 2015, Gahan has instituted his own signature annual sewer rate increase, hijacked a whole community (public housing putsch), committed even more future budgetary resources to riverside amenities, and pushed through the city hall relocation at a total expense in excess of $10,000,000.

I’m leaving out a few things, but we’ll get to them eventually. I’ve updated a few items, and left the rest of it alone. It’s as true today as it was four years ago.

Take it away, Jeff.

Jeff Gahan likes to say that he has balanced the budget because it makes it sound as though he’s somehow managed to run the city more efficiently. He’s not as keen to put real numbers to that claim, though, for good reason.

As provided by the Department of Local Government Finance, the state agency that oversees local budgets, here are those actual numbers– New Albany’s annual budgets from 2011 – 2018. Gahan took office in 2012.

Understandably given the large annual spending increases, the district tax rate has increased under Gahan each year as well.

Even with city government spending approximately $13,000,000 more per year now than it did before Gahan took over, those tax increases did not cover his tens of millions of dollars of additional spending on special and often seasonal projects like the aquatics center. Several of those parks projects alone, over $30 million, were financed with Tax Increment backed bonds, borrowed at interest against projected future tax revenues for the next 20 years. Many New Albanians 45 or older will likely be retired or perhaps even deceased before taxpayers manage to pay off just a single Gahan term as mayor.

And, as Gahan himself says, he’s not done yet.

There’s little reason to believe a third term would be differently focused, more efficient and practical, or more open and inclusive. As Roger Baylor says, transparency should not be a last resort. We shouldn’t be reading about million dollar golf course deals months after the fact but we are. If, like many New Albanians, you’re not comfortable with a mayor who tells you he’s “balanced” the budget when he’s substantially increased it or that he’s paid off debt from previous administrations when he’s taken on much more for comparatively frivolous projects and corporate subsidies, please vote accordingly.

Quality of life begins with honest communication, something that just doesn’t figure in Jeff Gahan’s accounting.

Jeff Gahan says he’s balanced the budget but the truth is he’s significantly increased the budget, nearly doubling it. He says he’s gotten us out of debt because former Mayor England’s sewer rate increases – rate increases Gahan argued against – have paid off some sewer bonds but he doesn’t mention his own borrowing, which has left us with increased not decreased debt levels.

Worth noting is that much of that debt is going toward paying off multimillion dollar projects that were awarded sans public bidding processes and, at least in some cases, have led to campaign kickbacks.

Now that we’ve taken on 20 years of debt to pay for them, Gahan says parks are a priority for quality of life but did not mention them at all when running for office. We’re also now finding out about his administration taking options on Uptown area real estate and pursuing eminent domain actions on riverfront property but he’s again not mentioning any of it in his campaign– just like he didn’t mention spending a million dollars on the golf course to the redevelopment commission or city council before he did it.

If anyone points these facts out too often, they’re banished from campaign and party social media spaces. If people value transparency and honesty at all, they can’t support this. If they do support it, they’ve really no right to complain in future about any political deceit. They will have chosen to tie their own blindfolds.

The really telling part is that, as Gahan and Floyd County Democrats block social media access to more and more people, they never actually deny what those people have said.

They just don’t want people to know about it. The truth makes them look bad so secrecy and lies begets more secrecy and lies. If incumbent and new Democratic council candidates won’t speak up against such misleading tactics now, there’s no reason to think they will if elected.

It’s damning for the whole party.

As an addendum, NA Confidential has been unable to confirm whether New Albany Mayor Jeff M. Gahan or anyone working in the city’s administration is under federal investigation or indictment for corruption, bribery or racketeering. It is standard policy of the U.S. Justice Department to refuse to confirm or deny the existence or non-existence of investigations or subjects of investigations. A similar policy exists at the F.B.I.