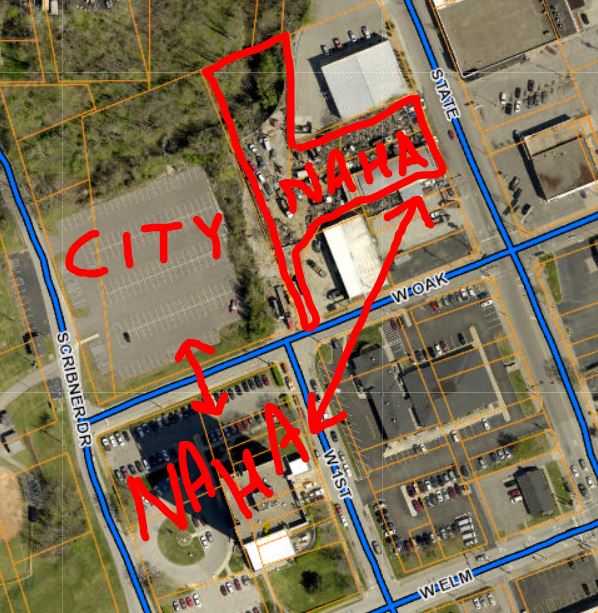 Back in March we stole a glance at a downtown parcel.

When Mayor Jeff Gahan visited the Mark Elrod Tower to campaign for lifetime employment as mayor, he was asked about the purchase. Imperial NAHA Procurator David Duggins brushed aside Dear Leader to explain NAHA’s desperate need for State Street frontage.

(Duggins quickly intervenes in a question intended for Gahan)

Duggins: “Well, none of that’s been released, it said in the paper we had the opportunity to buy an eyesore, and one of the proper uses for that is parking for that area. We do have a parking issue in that entire area, when we have anything that goes on at Riverview Tower we have to move folks out, we have to close those two spots out front, so any work, when we have electricians and all that, and when that eyesore became available to be purchased, which the city had targeted that for a long time, we purchased it, and that is why we’re doing it.”

Last week there was a fire at Riverview Tower, and Duggins quickly steered the ever obliging Chris Morris from humans to buildings.

For Gauleiter Duggins and Dear Leader, it’s all about the timetable to transform Riverview Tower into luxury with a view.

In this article, Duggins refers to Riverview as “a 16-story building with 160 units.”

Duggins said he is in weekly discussion with officials with the Department of Housing and Urban Development about Riverview’s future. He said it would likely be a year before any decision is made on the building. He said he tries to meet with residents weekly to dispel any rumors about the facility’s future.

He said he is no longer leasing units at Riverview because of the building’s uncertainty. There are currently 60 vacant units in the building.

“Regardless of the plan, we wouldn’t have to move folks for at least a year … “

If Riverview is only 62% filled, and given the ongoing profusion of hints to the effect that the building will be taken out of commission in some way, shape or form, then what’s the need for extra parking on State Street, which is situated three times the distance from Riverview as the city’s huge parking capacity opposite the ball fields?

Isn’t it the case that Gahan is borrowing from NAHA’s unused “refurbishment” funds to finance City Hall property speculation?

You know, it’s not hard to call them out for telling bald-faced whoppers when they’re openly contradicting themselves.

If you haven’t read the transcript of Gahan’s and Duggins’ comments to residents at the Mark Elrod Tower, consider doing so.

Demolition Man: Either Gahan lied about the NAHA “memorandum of understanding” from 2017, or he lied to Mark Elrod Tower residents in 2019. Which is it?

Elrod 3 In which Deaf Gahan asks: “Okay, what’s the ISSUE with Riverview? Do you KNOW people who live over there? I mean, WHY are we talking about Riverview?”

Elrod 2 In which Deaf Gahan encourages public housing residents to be “thrilled” about the indoor grass at the sportsplex he built with their money.

When it’s time for personal status protection, local Democrats rally around the Kool-Aid.