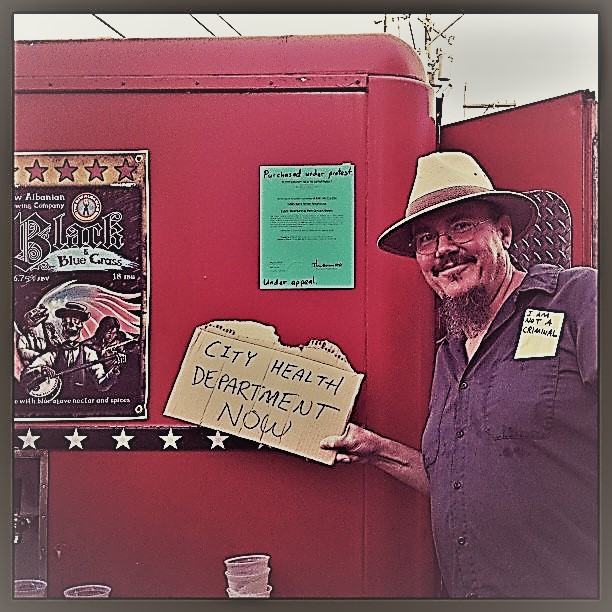 Last week’s announcement by the New Albanian Brewing Company that Bank Street Brewhouse will close on May 25 (NABC’s Pizzeria & Public House remains open, cooking and brewing) brought back many memories of BSB’s ten-year run, like the time I fought the law and the law won — but only temporarily.

In the following post from May 20, 2015 the whole story is told and a compendium of links provided. My personal favorite is this, the most-read “guest column” in the blog’s (almost) 15-year history.

ON THE AVENUES: PourGate (the Great Beer Pour War of 2013) and Dr. Tom’s prescription: “Kneel and Kiss My Ring, You Degraded Alcoholic.”

It probably has escaped your notice, since not one of you care very much about public health and safety, not to mention your own disgusting standards of personal hygiene, but vast numbers of our fellow Americans are clueless sheep wallowing in a medieval squalor of bacteria. If not for the efforts of selfless heroes like me, you’d doubtless be bathing daily in your own raw sewage.

You really must see yourselves some time. Your filthy, germ-ridden body parts hang flabby and exposed from inadequate, scant clothing. You continue to smoke cigarettes even after we kicked you outside. You have sex before you’re married, refuse to use condoms, decline to exercise, and “dine” regularly on Big Gulps and Fritos. Any of you ever met a whole fried chicken, deep-fried Twinkie or fat-laden burger you wouldn’t stuff by the dozen into your gaping pie holes? I didn’t think so.

We try our best to ban all these substances that hurt you, but do you thank us? No, you just keep babbling about your right to determine your own destiny and live your own lives, as though we can tolerate free will when pathogens are everywhere. What have we become in America, a nation of philosophers?

I was one-third owner of Bank Street Brewhouse from incorporation in 2008 until my NABC buyout was finalized in February, 2018. In all that time, I received one paycheck for BSB. The buyout wasn’t worth much more. But that’s just fine, because beating The Man was worth every lost penny.

It feels wonderful to have played a small role in checking the health department’s 2013 over-reach and clarifying the state law to prevent other entities from launching similar shenanigans about licensing. Not only that, but our subsequent (albeit smaller) hassle with the Alcohol & Tobacco Commission’s rules about the availability of food led to statutory adjustments as to what Indiana brewery taprooms can do to ease the weight of compliance with an obviously outdated standard.

If you’re managing a brewery taproom and no longer are compelled to keep frozen weenies in a dorm fridge next to the microwave … you’re welcome.

State representative Ed Clere did the heavy lifting in both cases, and I’m grateful to him for this — and to Lee and Bob for their efforts during PourGate.

In terms of writing, I think my coverage of PourGate is worthy of inclusion in NA Confidential’s Greatest Hits. Kick back, pour a stiff one and don’t forget the good times we had at Bank Street Brewhouse.

On June 14, 2013, the New Albanian Brewing Company was peaceably vending beer at Bicentennial Park, by means of a supplemental catering permit issued by the company’s governing agency, the Indiana Alcohol and Tobacco Commission.

I said no, that’s incorrect.

They persisted, and a two-year-long struggle commenced.

An Indiana Public Access Request was filed, and the Dr. Tom Harris and the FCHD’s attorney laughed it off. NABC filed an appeal, based on a previous Indiana appeals court ruling (Ft. Wayne v Kotsopoulus; thanks, Bob) and the FCHD’s board slightly moderated the department’s error, but did not correct it.

By late 2013, the Indiana Attorney General’s office had agreed with NABC’s reference to the court ruling, and found the FCHD to have absolutely no basis for its claim that a temporary food service permit was needed to pour beer.

The FCHD overtly and publicly stated that it would ignore this directive. 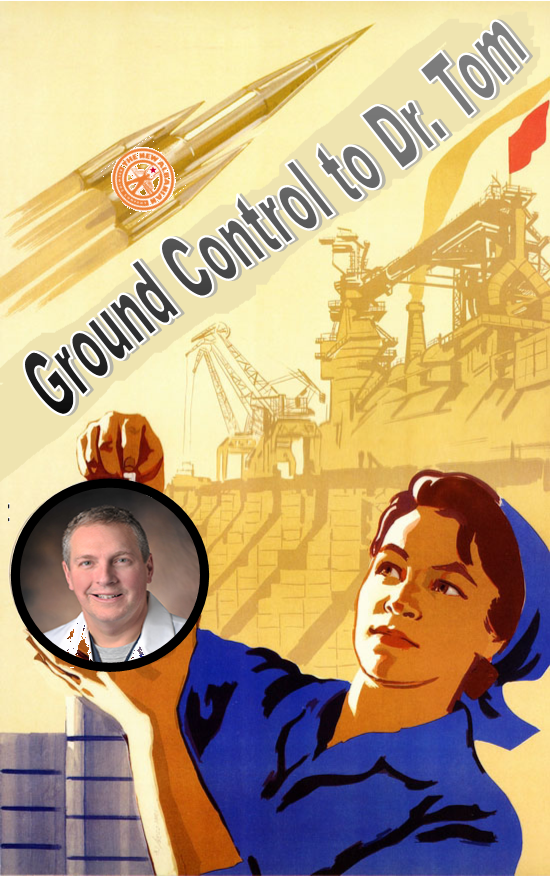 Throughout 2014, NABC and other vendors adhered to the FCHD’s improvised 2013 requirement, which although amended, remained utterly baseless and without statutory authority.

Now a new summer vending season is beginning in 2015, and there is a new development.

On July 1, 2015, when a “beer bill” authored by Rep. Ed Clere officially becomes state law, it will be demonstrated for a third (and we trust final) time that the FCHD and its head, Dr. Tom Harris, were mistaken all along.

The new law is clear and explicit, as based on the two preceding legal precedents, both hitherto ignored by the FCHD.

All thanks to Ed Clere.

His hard work in compelling local government functionaries to obey their own laws will not be forgotten, especially by me.

If we lived in a culture of accountability, Dr. Tom Harris would be cashiered on July 1, 2015, when the new law takes effect. For two years, Harris and his department have made a mockery of Indiana state law and the principle of due process. For what purpose?

Following is the text of the new law. After that, there is a (maybe) complete compendium of NAC links telling the story of PourGate.

“HOUSE ENROLLED ACT No. 1311, AN ACT to amend the Indiana Code concerning alcohol and tobacco.”

(a) As used in this section, “permit holder” means the holder of:

(b) A permit holder that sells or furnishes alcoholic beverages by the glass at a festival, fair, or other temporary location authorized by the permit holder’s permit under IC 7.1, is not considered to be a food establishment and is exempt from the requirements of this title that apply to food establishments, if the following requirements are met:

(1) The holder of a farm winery permit furnishes only the following for consumption on the premises, regardless of whether there is a charge:

The holder may not serve or furnish any food, including any fruit, condiment, flavoring, or garnish added to the wine after the wine is poured from its original container.

(2) The holder of a brewer’s permit furnishes only the following for consumption on the premises, regardless of whether there is a charge:

The holder may not serve or furnish any food, including any fruit, condiment, flavoring, or garnish added to the beer after the beer is poured from its original container.

(c) A local unit of government (as defined in IC 14-22-31.5-1) may not require any licensure, registration, or certification of a permit holder as a condition of providing alcoholic beverages at a festival, fair, or other temporary location authorized by the permit holder’s permit under IC 7.1, if the permit holder meets the requirements of this section.

Following is as complete a compendium of links as could be mustered in an hour and a half without Roger losing his mind. I should be awarded a effing Pulitzer Prize for this. They appear in reverse chronological order.

June 2, 2014: Is Hot Water More Effective than Cold for Washing Tom Harris Right Out of My Hair?

May 27, 2014: A fresh round of bald-faced lies from the Floyd County Health Department’s resident Red Shirts.

February 28, 2014: The Floyd County Health Department admits to being mistaken … in only one instance, but hey, it’s a start.

December 28, 2013: In which the Floyd County Health Department ignores the Attorney General of the state of Indiana.

December 10, 2013: Banner headline Tuesday, Part One: In the matter of PourGate, total and unequivocal defeat for the Floyd County Health Department.

September 7, 2013: Yo, Floyd County Health Department, your invoice is ready. Cash only, please. I’m not sure I trust your checks.

September 3, 2013: Your PourGate update for Tuesday, September 3, and a letter to the editor.

August 24, 2013: My second favorite News and Tribune reader comment yet.

August 21, 2013: Any adults in county government surface yet?

August 19, 2013: My favorite News and Tribune reader comment yet.

August 16, 2013: When pressed by Eater Louisville and N and T, FCHD unable to get its story straight.

August 14, 2013: Citizen to FCHD: “I will not stand for our public officials and public departments to promote … public bullying.

August 13, 2013: NABC to Floyd County Commissioners, Health Department: “This malicious activity has caused, and continues to cause, financial harm to the claimants’ businesses and corresponding reputations.”

August 8, 2013: ON THE AVENUES: The fruitless search for adults in county government.

August 7, 2013: Midweek PourGate update: What’s up with the Health Department these days?

August 2, 2013: Equal protection from health department bureaucrats? Just give that wheel a heave.

July 30, 2013: Clear as mud: Floyd County Health Dept. Hearing Appeals Board has many feelings, but not very much law.

July 28, 2013: In the search for Instigator Zero, expect papers to be shredded.

July 24, 2013: The hearing is tomorrow, but the Floyd County Health Department is stonewalling about its public access obligations.

July 23, 2013: Dressing up for a date with the Health Department board.

June 28, 2013: Concert tonight, but the PourGate saga continues as we prepare to vend Progressive Pints under protest.

June 27, 2013: My note to the Indiana Public Access Counselor, informing the office of my request of the Floyd County Health Department.

June 26, 2013: “In an effort to facilitate seemingly scant communication,” my e-mail to Dr. Harris.

June 25, 2013: Isn’t this an indictment of our entire American society?

June 22, 2013: Bureaucrats, potato chips and the need for a city health department.

June 18, 2013: No Tricentennial for DNA in wartime, unfortunately.