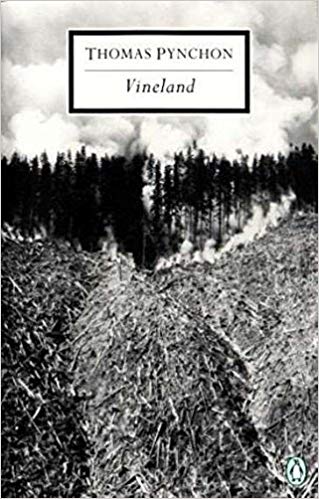 Reading may lead to an adjustment in brain chemistry. At least I hope it does. The current selection reposing atop the nightstand is Thomas Pynchon’s 1990 novel Vineland, more about which in a moment.

A brief digression: I actually do believe in ghosts, just not the supernatural spirit sort. Rather, I believe in the ghosts inhabiting my own head space. At the present time, while scanning and annotating 30-year-old slides, these ghosts are proliferating.

Up until the spring of 2017 little of this would have occurred to me. But my mother died in 2017, and during the weeks that followed her passing a book I was struggling mightily to comprehend at the time suddenly began speaking to me: Alan Moore’s gargantuan novel Jerusalem.

Each of Jerusalem’s chapters offers a vignette centering on one of the Boroughs’ many diverse inhabitants, including humans, angels, demons, and time-traveling ghosts; the characters’ lives intersect in space and time (and other higher dimensions), forming an intricate web of narrative interconnections.

Later that summer, fulfilling a promise I’d made to a friend, I somewhat unwillingly undertook to read Lincoln in the Bardo, a novel by George Saunders. I found it oddly compelling. Saunders provides insight:


Without giving anything away, let me say this: I made a bunch of ghosts. They were sort of cynical; they were stuck in this realm, called the bardo (from the Tibetan notion of a sort of transitional purgatory between rebirths), stuck because they’d been unhappy or unsatisfied in life. The greatest part of their penance is that they feel utterly inessential – incapable of influencing the living.

Now it’s Pynchon and the characteristic oddity of the Thanatoids, who appear in Vineland. “Thanat” is the Greek word for death, and “-oid” suggests an imperfect resemblance: deathlike.


Thanatoids are ambiguous beings, creatures of entropy. They “watch a lot of Tube,” living in ghostly communities like Shade Creek, where DL and Takeshi (the “Karmic Adjuster” almost accidentally killed by DL thinking she was killing Brock Vond with the ninjic “Vibrating Palm” — is anything harder to summarize than a Pynchon plot?) meet Ortho Bob Dulang, their first Thanatoid. They “limit themselves… to emotions helpful in setting right whatever was keeping them from advancing further into the condition of death… the most common by far was resentment…”

Thanatoids seem more zombie-like than ghostly, and in typical Pynchon fashion it’s all kept quite confusing.

Moore’s ghosts are ghosts; they cannot interact or be heard by humans … except in certain cases, when they can influence the living. Saunders takes it from there by means of his bardo (with reciprocity in the case of Lincoln, who enhances the self-esteem of the dead). Thanatoids apparently cannot completely die until their resentments are abated.

Literature is neither real life, nor real death. The ghosts I’ve created remain inside my own head. They seem slightly more unreal than before, although only a wee bit.