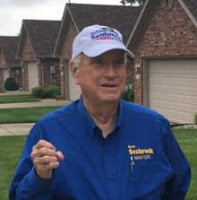 I spoke with Mark Seabrook last week and we covered much the same ground. Seabrook looks and sounds much improved to me.

My two cents: Game on. Whether you’re for or against Seabrook, it is fitting and proper that he has been open about his health issues and what he’s done to get better. The forthcoming general election needs to be about issues that pertain to the city’s future. We already know that Jeff Gahan will be ducking these issues. Now we’ll see how the Republicans and independent candidate Dan Coffey handle them.

NEW ALBANY — Mark Seabrook has heard the rumors circulating around town about him having to drop out of the race for New Albany mayor due to his health. He has had to answer questions for the past month, reassuring people that he is all in and not going anywhere.

“I am running for mayor of New Albany and I am ready to go,” he said Friday.

It’s true that Seabrook, who is 67, has dealt with some health issues in the past month. He had a pacemaker put in and during his stay in the hospital, was told he needed to go on dialysis three days a week. While he admits he was discouraged about the prognosis at first, he says he has been “re-energized” and feels better than he has for “a couple of years.”

“At first that was very devastating to me,” he said about having to go on dialysis. “I had a misconception of what that was. But without it, I wasn’t going to be able to pursue my two favorite interests, which were playing with my grandkids and serving this community” …