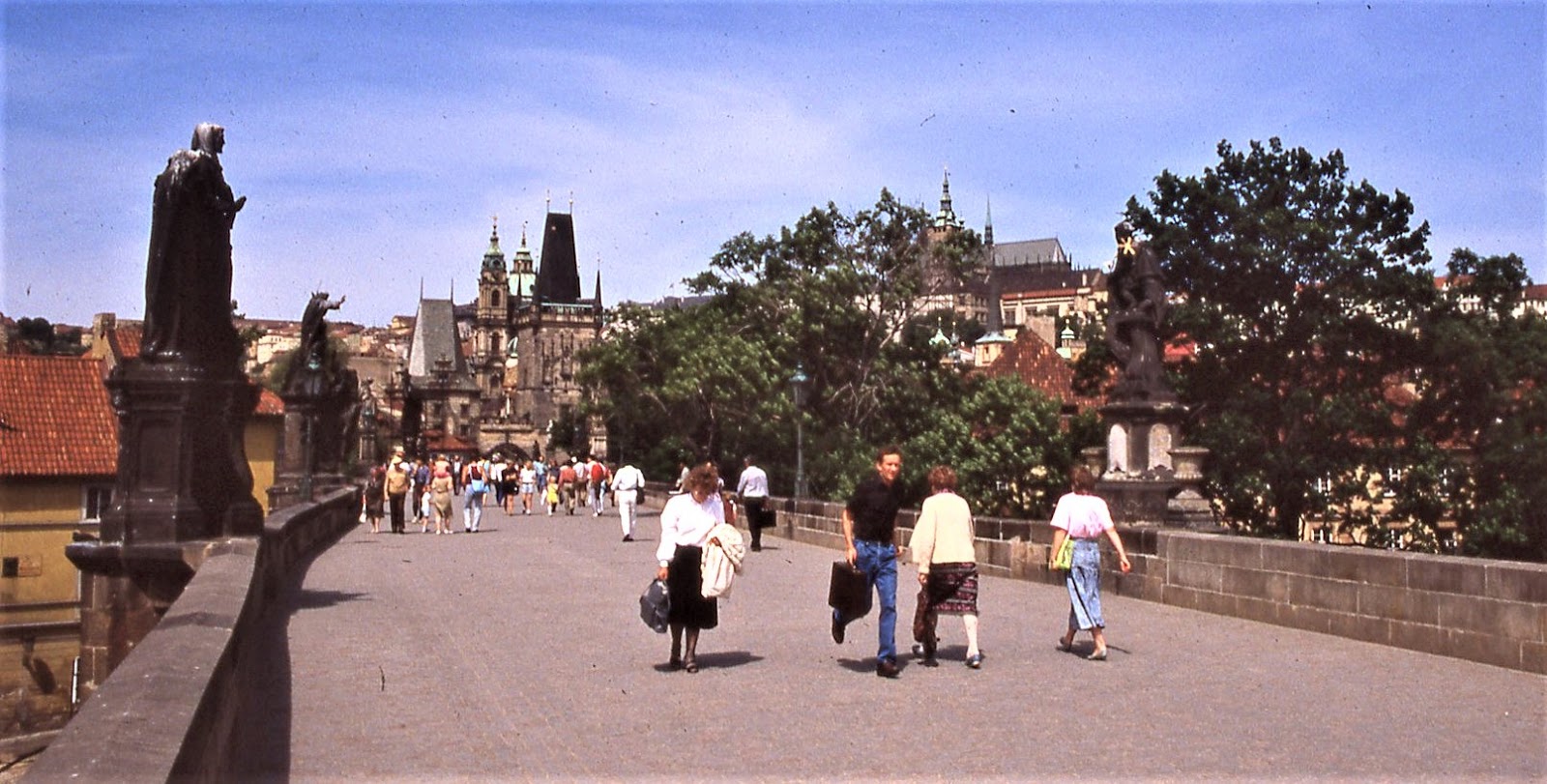 I shall be telling this with a sigh
Somewhere ages and ages hence:
Two roads diverged in a wood, and I—
I took the one less traveled by,
And that has made all the difference
— Robert Frost

The photo was taken on the Charles Bridge in Prague one afternoon in June of 1989, and of course at the time Czechoslovakia was “behind” the Iron Curtain (from our vantage point, at least), and nowhere close to the level of accessibility the city experiences today.

It’s been too long since I’ve been to Prague, but based on the photos I see today and the testimony of recent visitors, you’d be compelled to visit the bridge by the light of the moon just before dawn to find it as emptied of people as in this photo. Most of the people pictured here were natives, walking back and forth, to and from places important to them in their own lives.

Overtourism is a thing. Maybe it always was, but we seem to have missed it for the most part these past few years. Our destinations have included Tallinn, Estonia; Mechelen and Poperinge, Belgium; Catania (Sicily) and Valletta (Malta); Porto, Portugal and Gdansk, Poland. There have been tourists in these places, though not a ridiculous selfie-ridden scrum, and part of the reason for this might be our habit of off-season travel in addition to choosing secondary locales.

To me, they’re just as exciting as the places you’re “supposed” to go.

Haarlem, Netherlands is only a few minutes from Amsterdam. To be in Haarlem, which is a large city in its own right, is to enjoy everything wonderful about the Dutch way of life without stumbling over tourists in the fashion of Amsterdam. Yes, there are museums and sights in Amsterdam that cannot be found in Haarlem, but thanks to an amazing public transportation system, they’re all within easy reach from outside the larger city.

My next trip to Europe will be my 40th since 1985, so I can’t say I’m not a tourist like all the rest. Just the same, the smaller cities and “lesser” attractions have come to captivate me. My advice is to vacate the beaten path and find the place that speaks to you like all the others can’t.

These are the cities overtourism could threaten next, by Hannah Sampson (Washington Post)

Amsterdam, Venice, Barcelona, Paris — the poster children for overtourism are well-known. Now, 20 more cities are on alert lest they turn into the future face of the problem, according to a new report from the World Travel & Tourism Council and commercial real estate firm JLL.

Another 13 cities — called “mature performers” — were described as having an established tourism infrastructure, strong leisure or business travel, and good positioning to manage current growth levels. “But there is a risk of future strains related to visit volume, infrastructure or activity that is testing readiness for additional growth,” the report said. It listed Auckland, New Zealand; Berlin; Dublin; Las Vegas; Lisbon; London; Los Angeles; Madrid; Miami; New York; Seoul; Seville, Spain; and Sydney in this category.

The study adds a fresh layer to the ongoing conversation over how much tourism is too much, and how both iconic and emerging destinations can cope with the world’s apparently insatiable appetite for travel.

“Over the past few years … several destinations, and cities in particular, have been criticized in the media for the under-management of travel and tourism and the stresses that visitor numbers have put on urban systems and residents,” the report said.