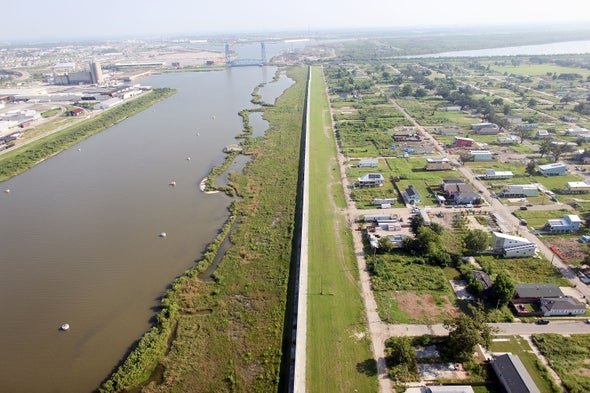 By the way, it’s raining again.

Hell Is High Water: When will the Mississippi River come for New Orleans? by Henry Grabar (Slate)

ARABI, Louisiana—The water is breaking gently around the hull of the crew boat Miss Emerson, as if she were puttering across a muddy lake. Instead she is tied at the dock of Port Ship Service, straining at her bowline as a supercharged Mississippi River rushes beneath. On the bank of a levee just over the parish line from New Orleans’ Lower Ninth Ward, Capt. Charles Crawford is preparing to take control of the Valle Azzurra, a big ship coming down the river in a hurry. The Miss Emerson is a transport boat. She will pull alongside the Malta-flagged tanker, and Crawford will board the larger vessel as the ships run momentarily together. He will climb a ladder that hangs over the ship’s port side, whose paint is scraped from a recent trip through the Panama Canal. His assignment: steer the Valle Azzurra safely to Pilottown, where the river meets the sea.

“Where’s mine?” Crawford asks Timmy Lopez, the drawling, tattooed dispatcher, his eyes as blue as the river is brown.

“Coming up on Perry Street,” responds Lopez with a glance at a monitor, as if we were waiting for an Uber instead of a 200-foot ship carrying 10,000 gallons of God knows what around the bend at Algiers Point.

Crawford is a member of the Crescent River Port Pilots Association, a group of elite mariners who steer tankers, freighters, and cruise ships down the 106 treacherous miles between New Orleans and the Bird’s Foot, the Mississippi River’s branching delta. It is specialized terrain, the pilots say, and even an experienced captain would struggle with its eccentricities. Crawford has the demeanor of a Hollywood airplane pilot—tanned, pleasantly lined face, a full head of gray hair. He has been doing this job for 40 years, and this one will be his last. “I always said, ‘I think I’ve got another high river season,’ but this year I said, ‘No, no more,’ ” he says, passing me the association calendar, which he helps photograph and design. “I’ve been doing this a long time, and I’ve seen a lot of high rivers, but I’ve never seen a river this high, this long.”

No one has. The Friday that Crawford sat waiting to board the Valle Azzurra was Day 225 of high water in New Orleans, tying the longest stretch in recorded history, set in 1973. The next day—Saturday, June 8—the record broke, and there is no end in sight …