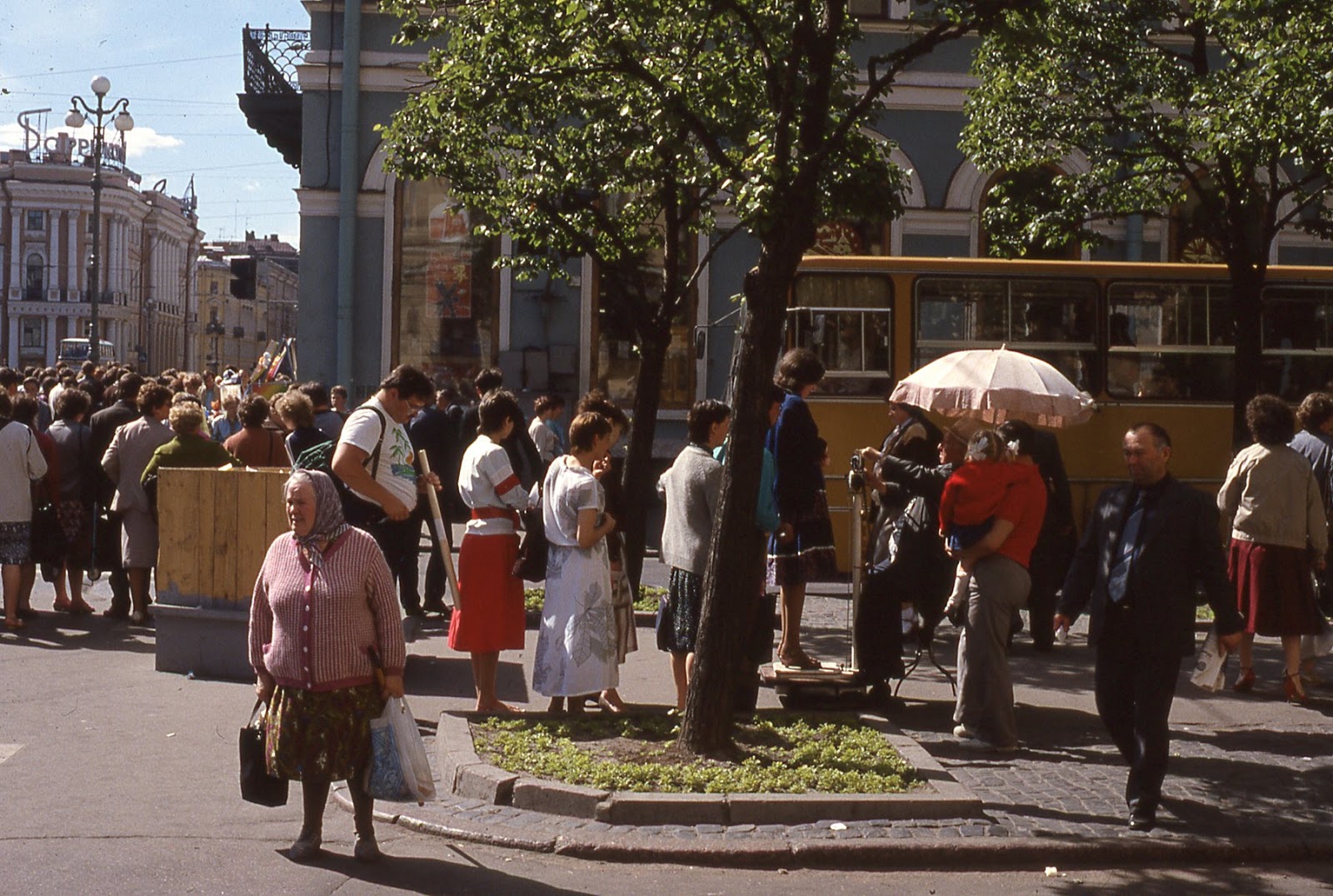 The following first appeared in 1987 as part of my summer-long revisit of the 1987 Europe trip.

Previously: 30 years ago today on THE BEER BEAT: Changing an empty keg the Soviet way.

It is with much confusion that I attempt to describe the events of July 3 and 4, 1987.

My notes insist that the tour group arrived in Leningrad on the morning of Thursday, July 2, after a largely sleepless overnight train trip (described previously). The party began again on the evening of July 2, spilling over into Friday morning, July 3.

On Friday morning, we boarded a hydrofoil to Peterhof (Petrodvorets). Hangovers were rampant, but at least it was a lovely summer day to cruise the Gulf of Finland.

One of St. Petersburg’s most famous and popular visitor attractions, the palace and park at Peterhof (also known as Petrodvorets) are often referred to as “the Russian Versailles”, although many visitors conclude that the comparison does a disservice to the grandeur and scope of this majestic estate.

Upon returning from Petrodvorets, there was a tour of the Hermitage Museum at the lavish former Winter Palace of the Romanovs, and in the evening, some of us went to the Baku restaurant to celebrate Nick’s birthday.

By evening on Saturday, July 4, the group had wrapped its Leningrad tour in the morning (Piskaryovskoe Memorial Cemetery and museum of the WWII siege) and flown to Riga, Latvia for the next stage of liver damage.

The timing matters, owing to one of the most famous episodes of the journey, wherein an American flag abruptly appeared atop the Leningradsky Dvorets Molodezhi Hotel in honor of July 4, U.S. independence day.

It had to have happened at night on July 3, into the morning of July 4.

Seeing as I remember nothing about the Baku meal, it will come as no surprise that details about the circumstances of this flag’s novel appearance in the USSR also completely elude me.

Furthermore, I’ve no idea how the flag was reclaimed, because at some point thereafter it was traded to a cooperative Soviet railway attendant for a tin of caviar the size of a football.

No photos survive of this flag, unfurled atop the brutalist architecture in Leningrad, and tolerated with remarkable equanimity by hotel staff. I wonder if we bribed them? 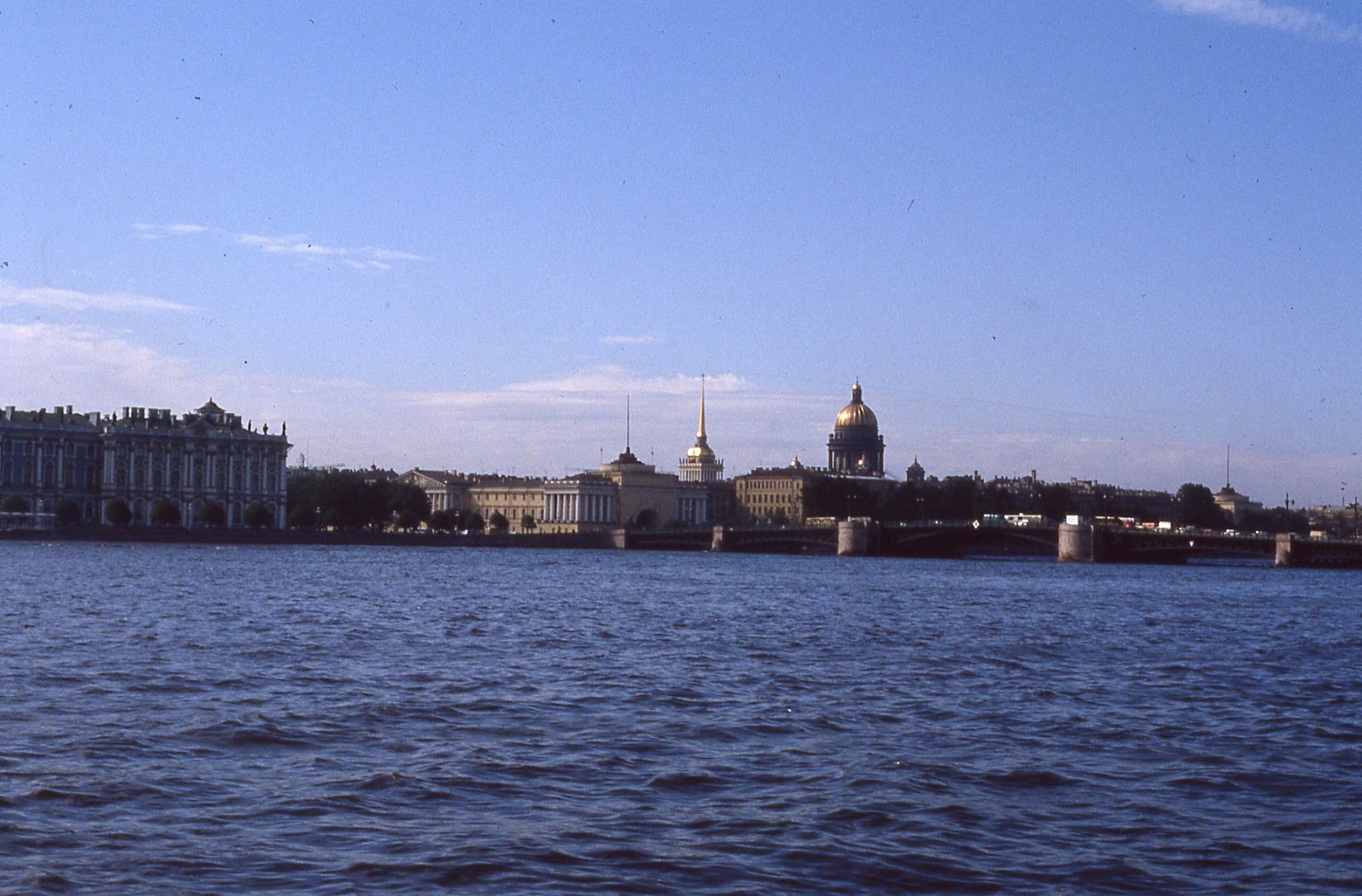 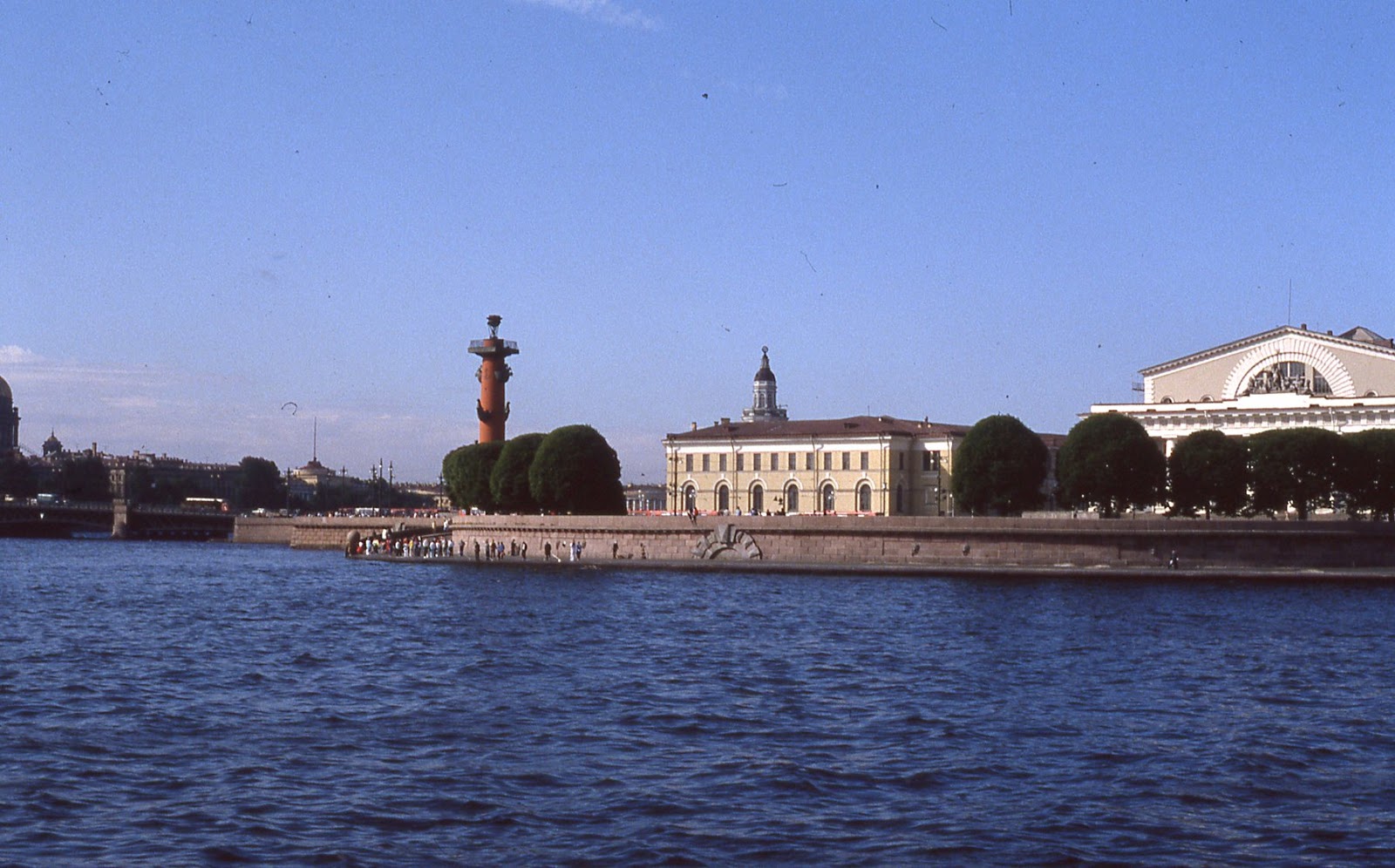 And incredible Petrodvorets, the Versailles of Peter the Great. 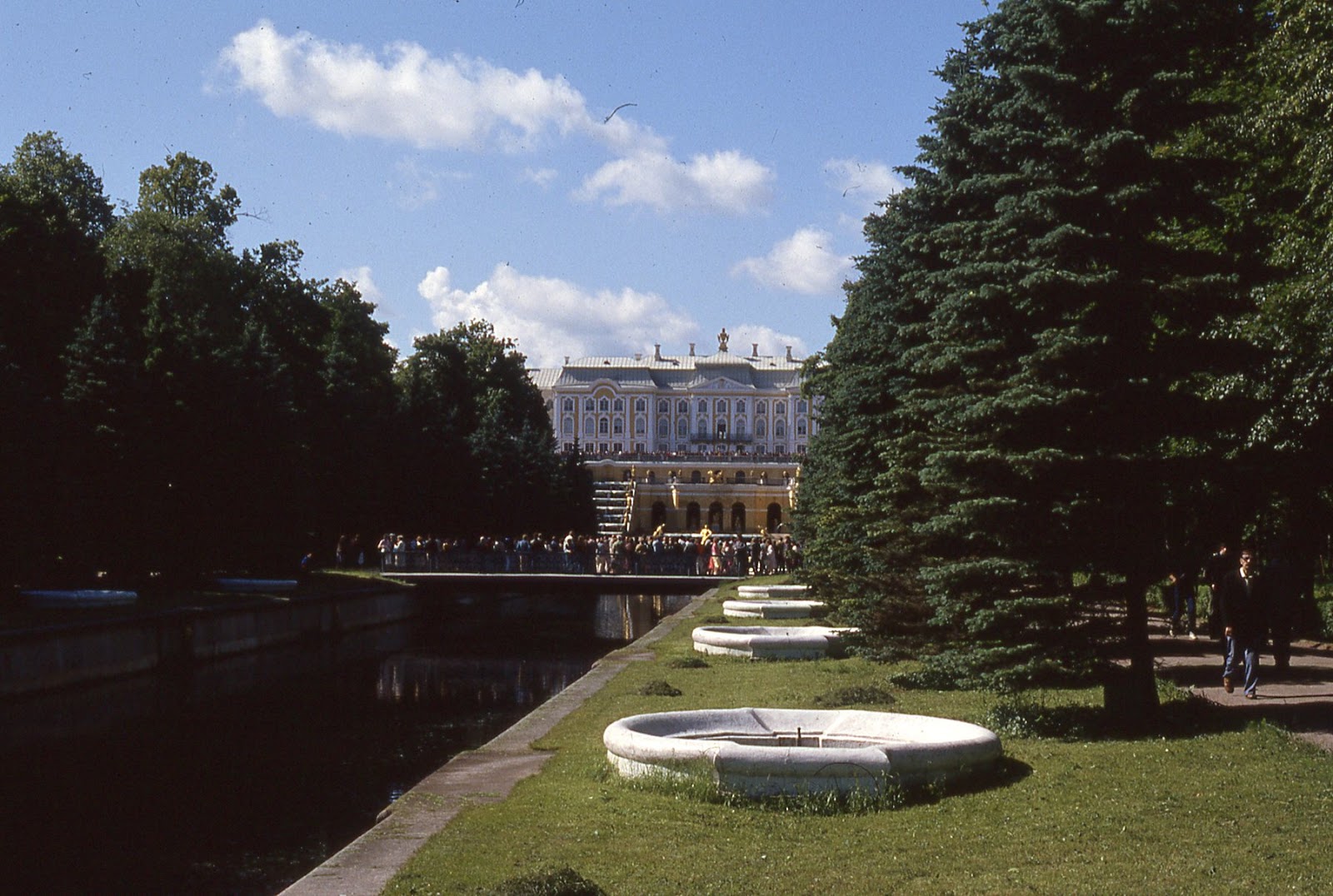 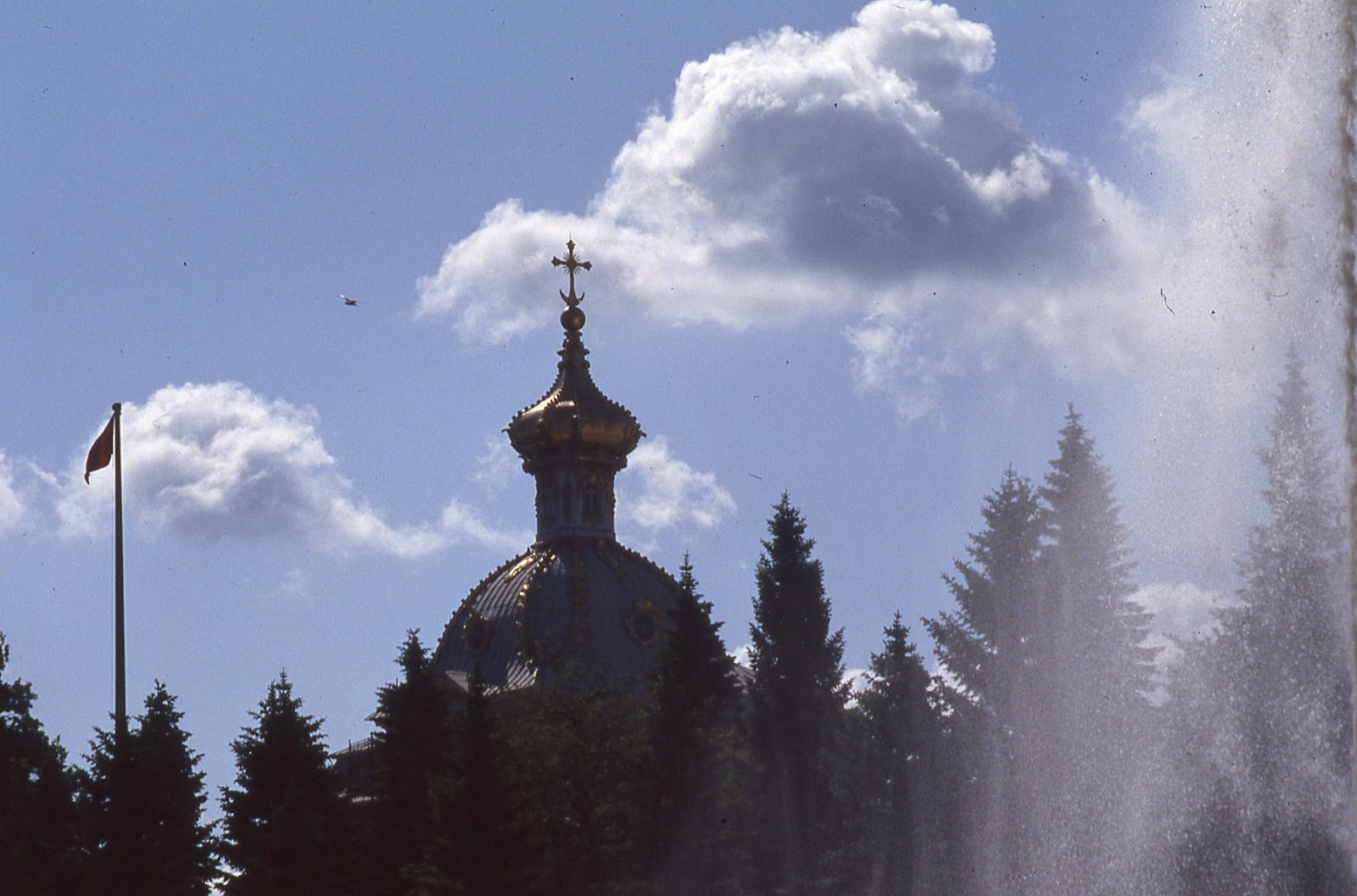 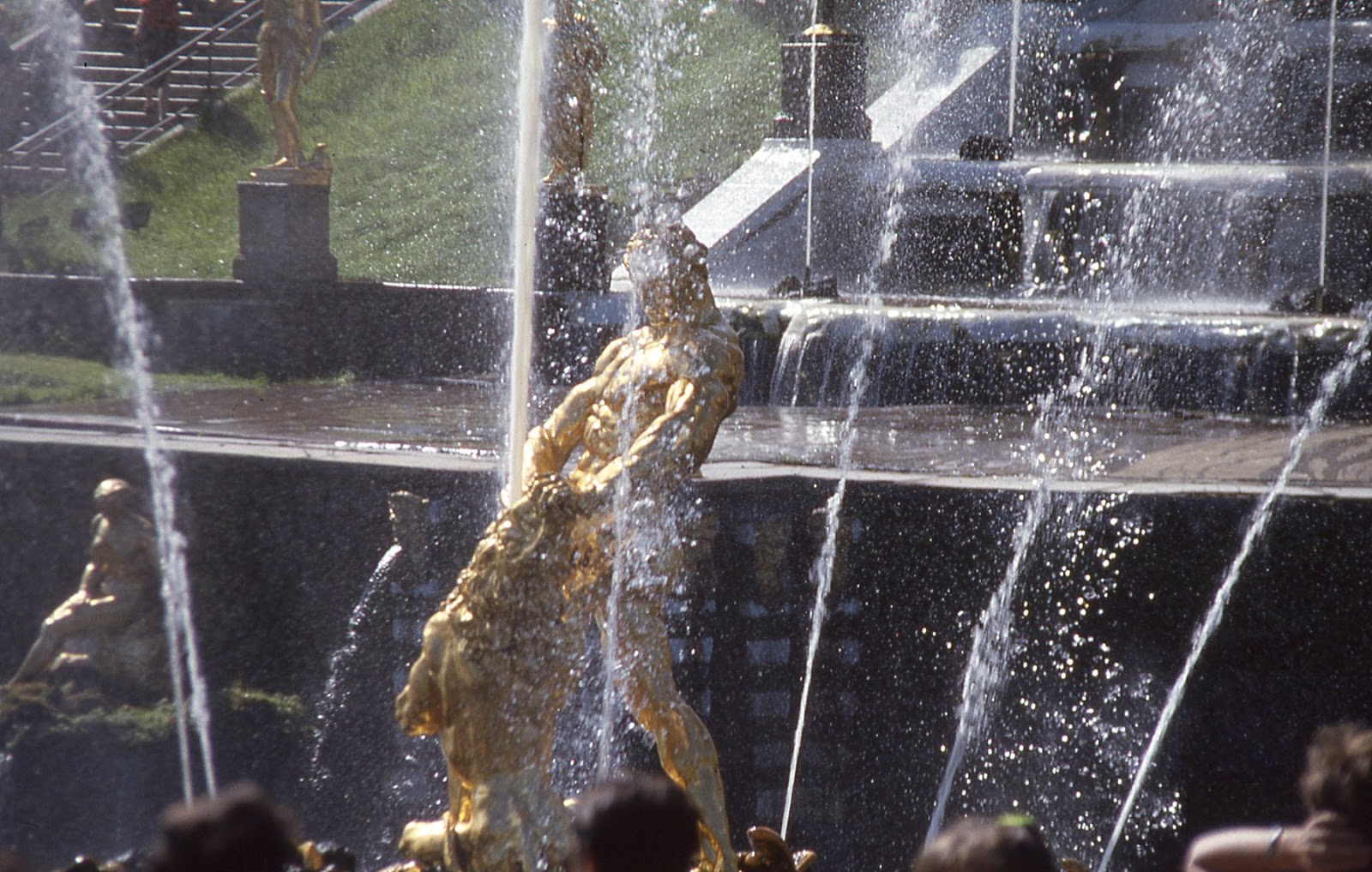 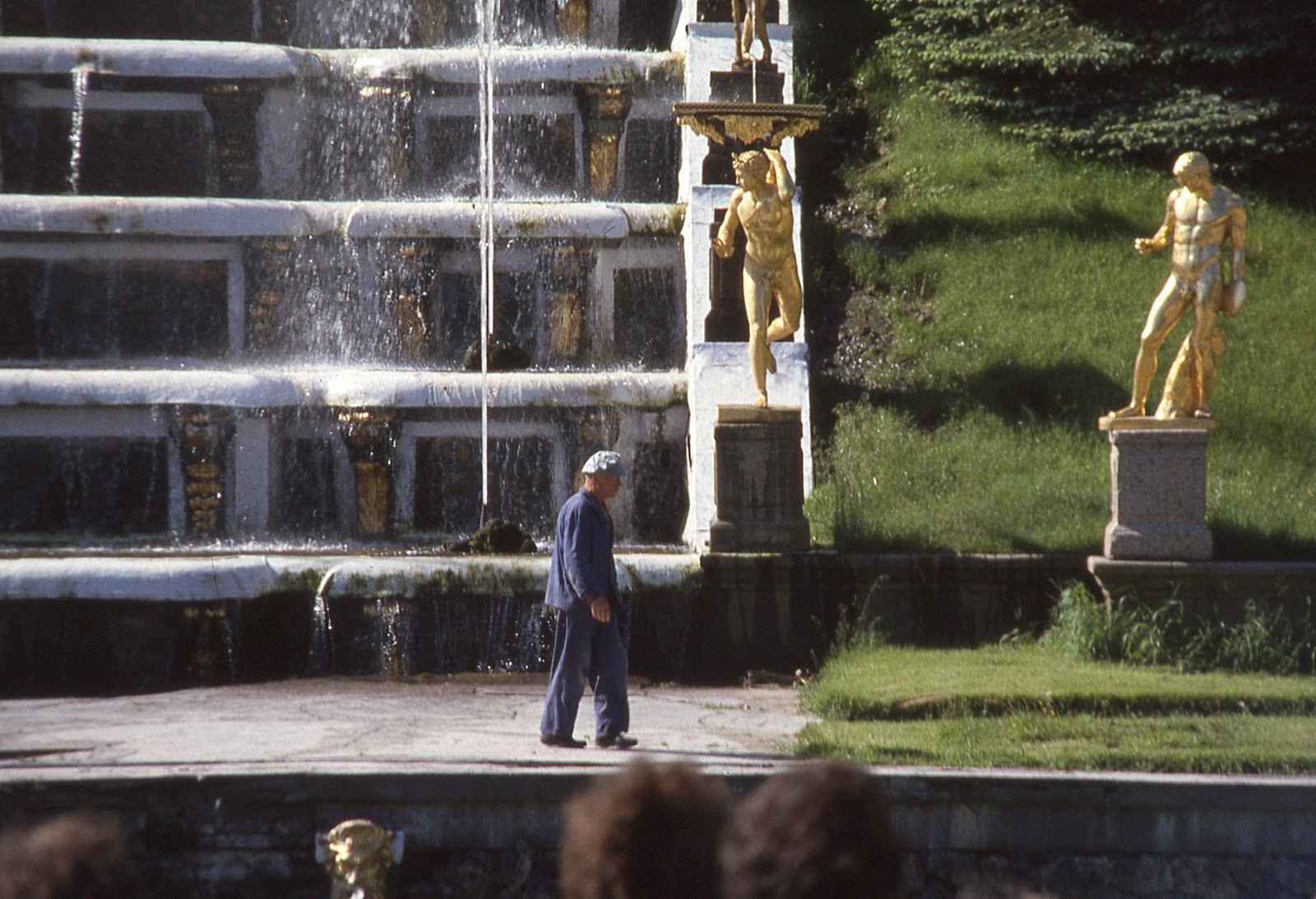 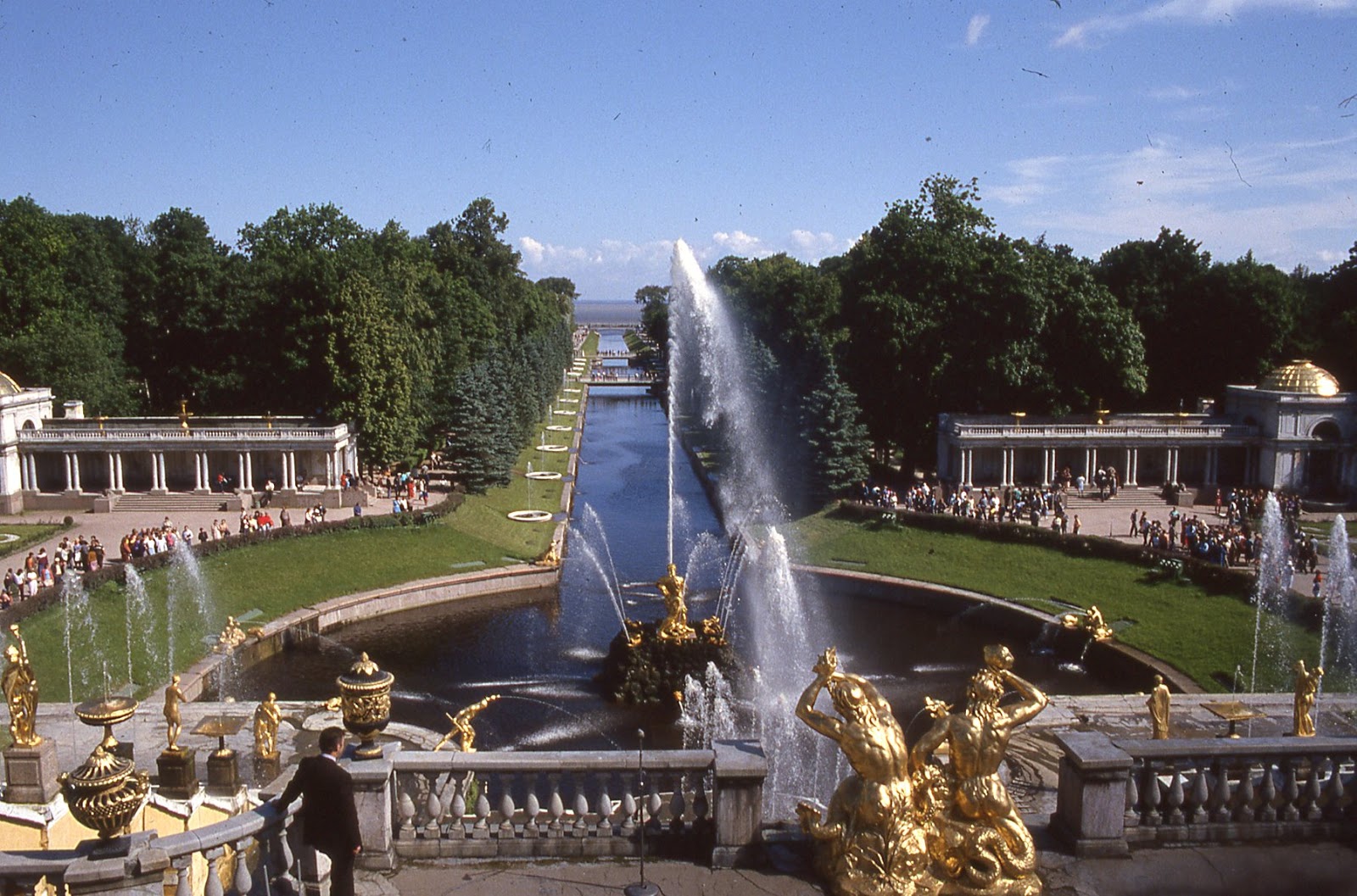 I believe the game was to see which stones activated the water jets when trod upon. 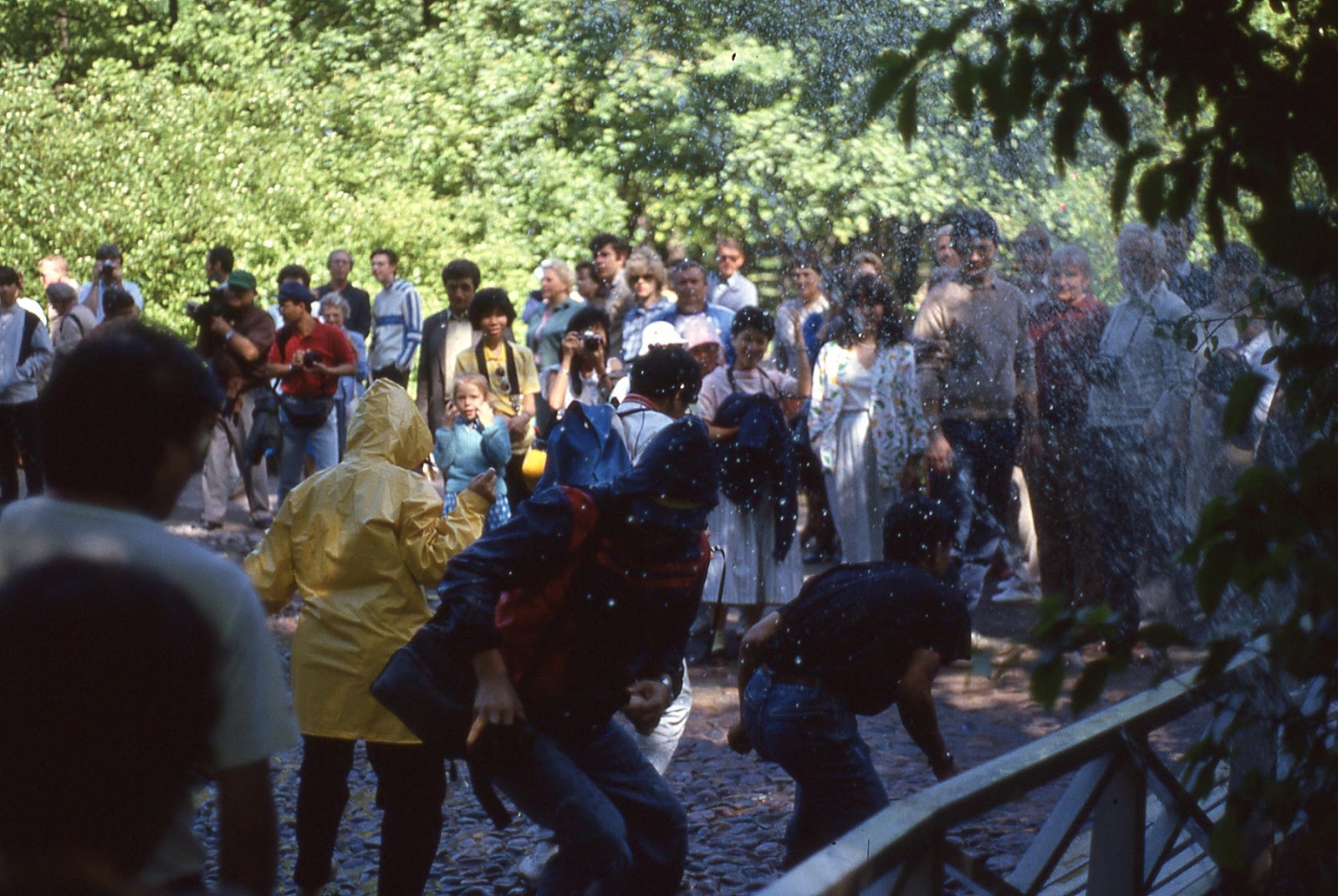 Next, Dom Knigi (Singer Company Building), where we loaded up on dirt cheap propaganda posters.

St. Petersburg’s largest and most famous bookshop, Dom Knigi (“House of the Book”) occupies one of the most beautiful buildings on Nevsky Prospekt – the Singer Company Building, an innovative and richly decorated Art Nouveau masterpiece. 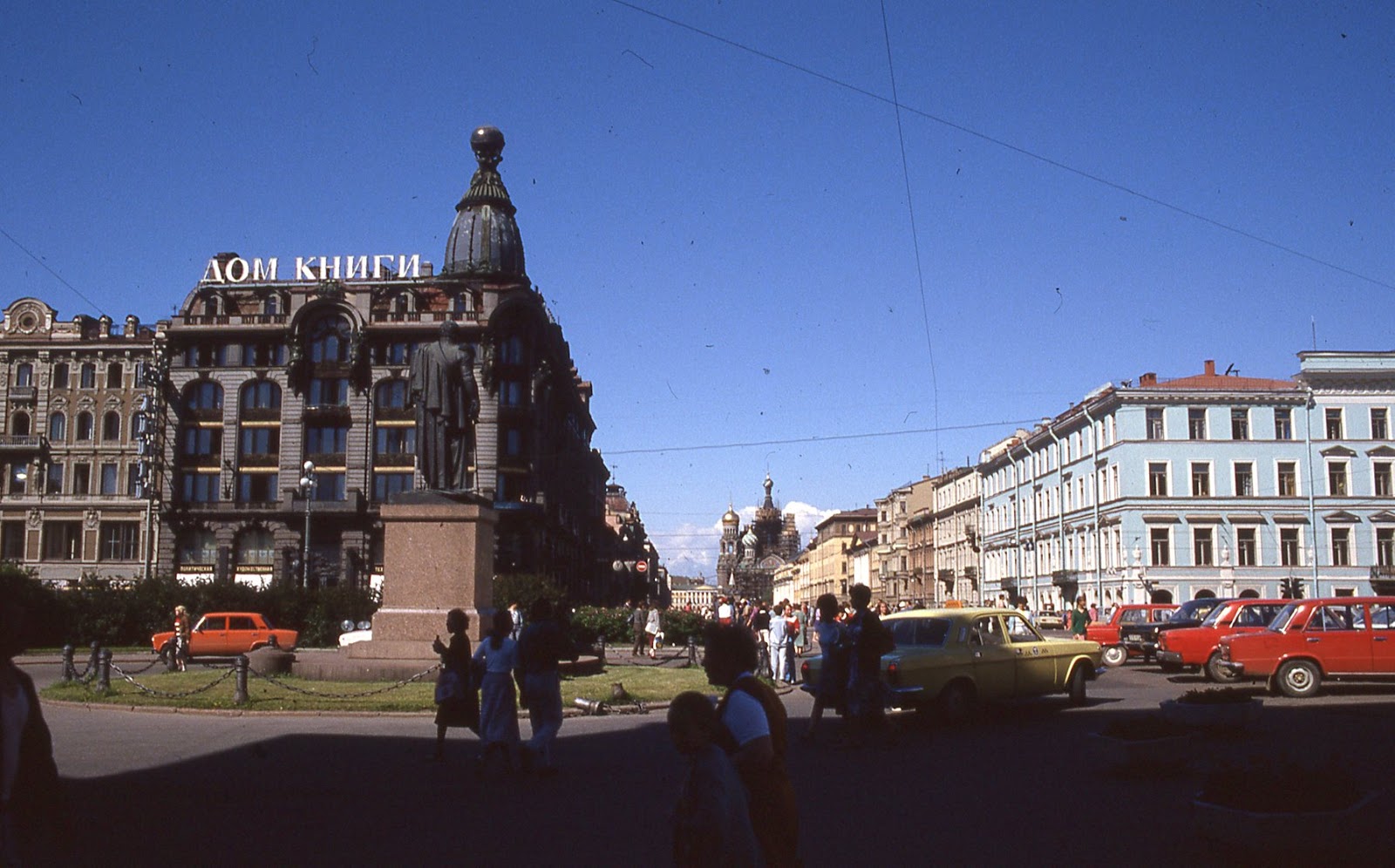 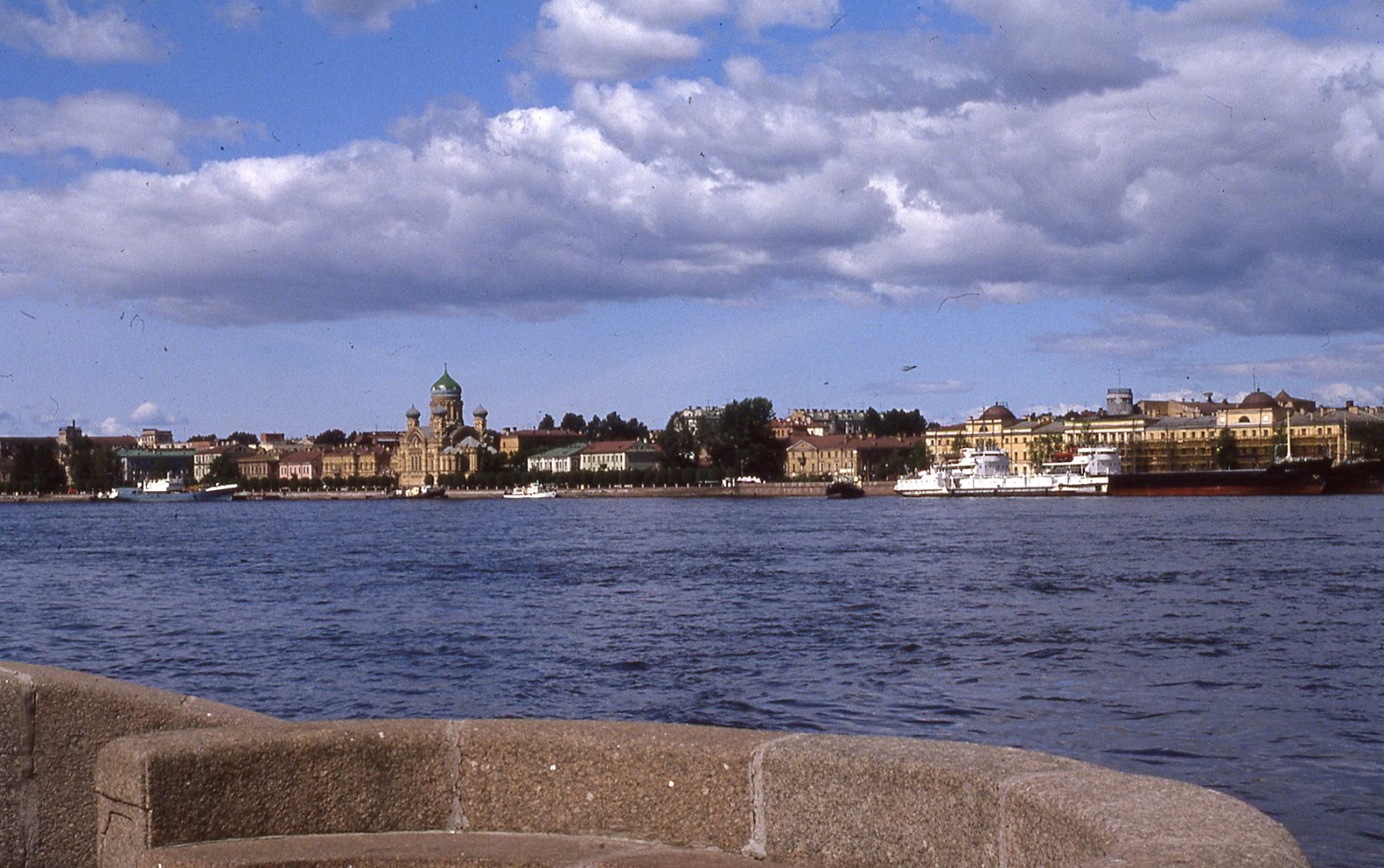 Even today, St. Petersburg’s Piskaryovskoe Memorial Cemetery continues to speak eloquently to the experience of Leningrad under siege by the Nazis in WWII.

It was a Saturday afternoon, and so we were able to witness the Soviet custom of newlyweds visiting the cemetery to honor the sacrifice of the populace during the siege.

The most significant monument to those who died during the Siege of Leningrad, this enormous memorial cemetery on the north-eastern outskirts of the city holds the graves of around 420 000 civilian victims of the siege, the majority of whom died of cold and starvation, and 70 000 soldiers who died in the defense of the city. On Victory Day (9 May), the cemetery is a centre of activity for the relatives of those who are buried there and anyone who wishes to commemorate the thousands of victims of what is undoubtedly the greatest tragedy in St. Petersburg’s history.

In 1987, it had been only a little more than 40 years, and most families had suffered losses: “Nobody is forgotten, nothing is forgotten.” 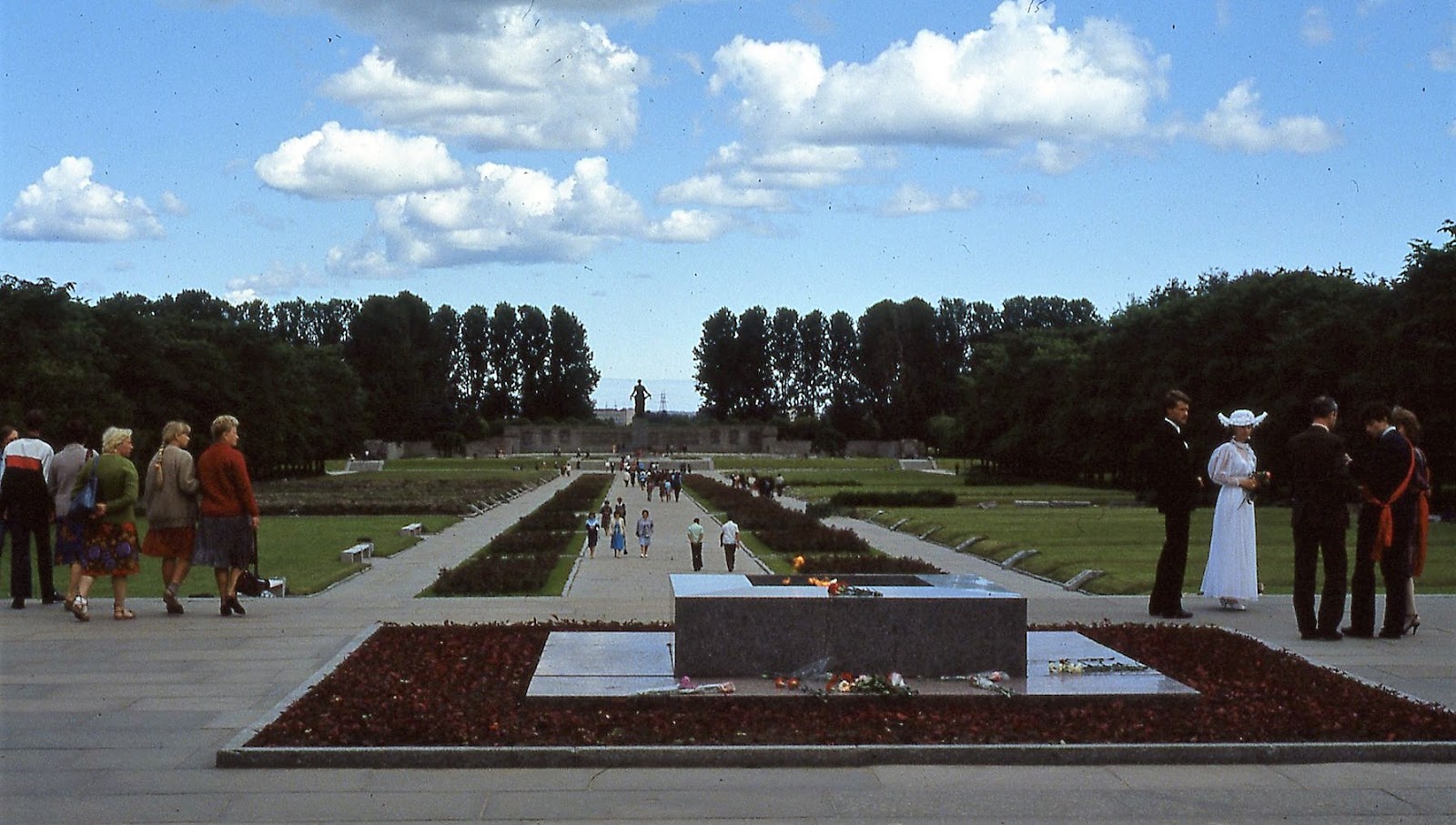 A final memento of WWII is this preserved sign, still intact today, reading “Citizens! In case of shelling, this side of the street is most dangerous.” 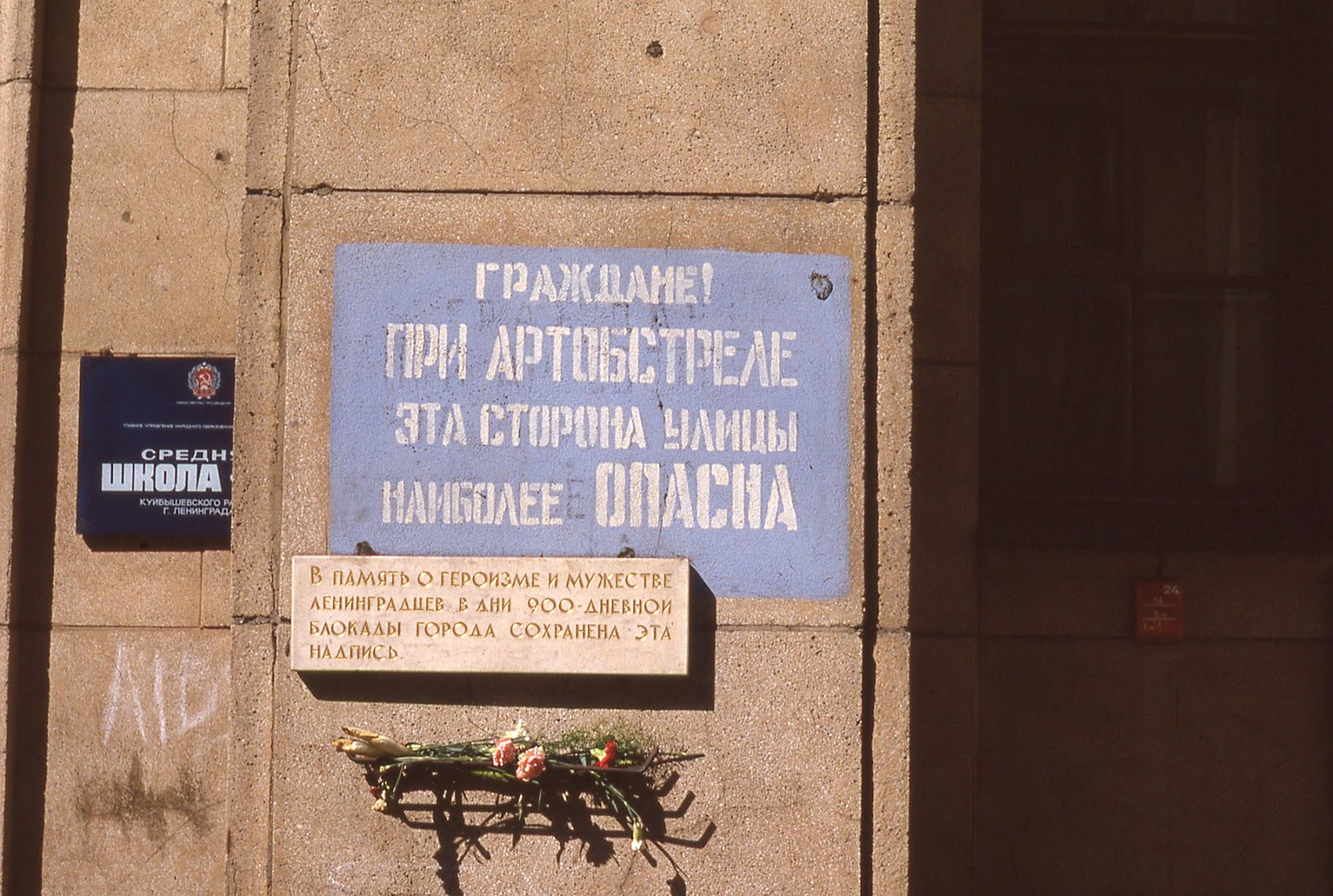 Next: A brief Kvass digression.