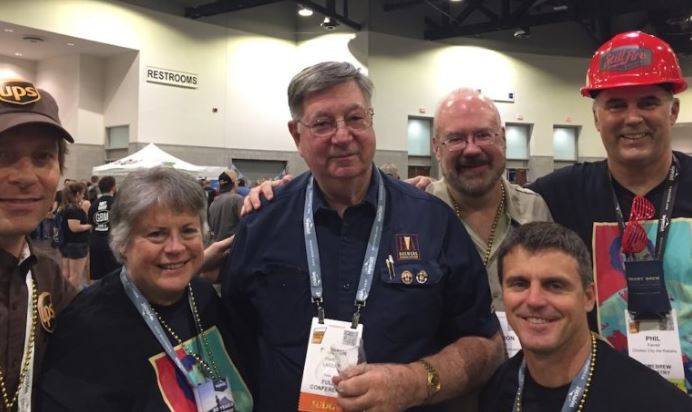 These days I seldom judge beer, but somewhere around 17 years ago I actually managed to pass the Beer Judge Certification Program (BJCP) test by the slimmest of margins, thanks to the preparatory class taught by none other than Darwin “Dibbs” Harting.

Beer judging isn’t rocket science, but Dibbs is a rocket scientist. Quite simply he’s one of those Mt. Rushmore faces when it comes to local homebrewing and the craft beer culture that grew from it. Congratulations to Dibbs for this rare recognition. I take a back seat to no one when it comes to thanking this man for his many contributions to the regional beer scene.

The BJCP Board awarded Darwin “Dibbs” Harting of Pekin, IN the rank of Honorary Master at the 2019 National Homebrew Conference (NHC) in Providence, RI. Since Harting has collected the requisite Grand Master service requirement points and judging experience points, he also earned a promotion to the Grand Master rank. BJCP President Gordon Strong awarded Harting his new rank pins during NHC Club Night in front of his homebrew club, the Louisville Area Grain & Extract Research Society (LAGERS) of Kentucky.

Harting became a BJCP judge in 1994 and obtained the National rank in 1998. Several BJCP members submitted nominations for Harting to receive the Honorary Master rank. They praised him for over two decades of commitment to the BJCP via leading local judge training and recruitment efforts, including creating a local instructors guide and driving long distances to lead judge training classes. One nomination said that “I can say with absolute certainty that Dibbs is the main reason for almost every judge we have in the Kentuckiana area” …