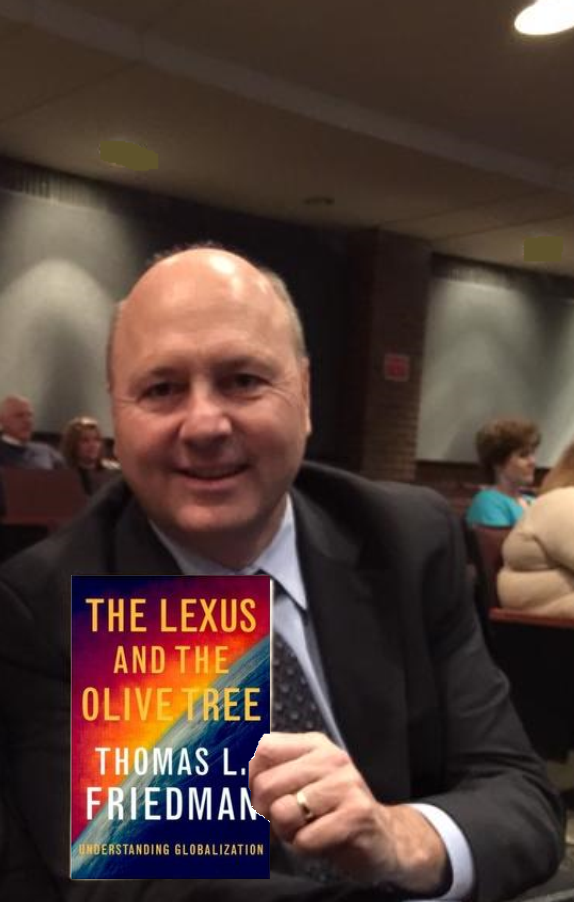 I first became aware of Thomas L. Friedman when my pal Barrie and I read From Beirut to Jerusalem (1989), which described Friedman’s feelings about Israel in the context of his work as a young reporter in the Middle East during the 1980s.

The book seemed solid to me, particularly the chapter called “Hama Rules,” which bluntly detailed the horrifying violence directed against internal dissent by the elder Assad in Syria circa 1982, thus providing a preview of son Bashar’s predictable instincts during the country’s recent civil war.

However this passage at Wikipedia suggests that I didn’t necessarily have a wider frame of reference at the time.

It received the 1989 National Book Award for Nonfiction and also the Cornelius Ryan Award. In a book review for The Village Voice, Edward Said criticized what he saw as a naive, arrogant, and orientalist account of the Israel–Palestine conflict.

There’s little sense in belaboring the point, which comes down to this: As my frame of reference widened, Friedman’s credibility shrank in proportion. His article last week, as dissected here by Elie Mystal, was like an itemized list of centrist wrong-thinking in response to Trumpism.

I haven’t read a column by Friedman for a very long time, and propose to double down on what is proving to be a correct decision on my part.

Tom Friedman Has No Idea What He’s Talking About, by Elie Mystal (The Nation)

Every pundit urging moderation was wrong in 2016, and they’re wrong now.

There is one, and I’ll argue only one, thing that Thomas Friedman gets right in his latest New York Times column “‘Trump’s Going to Get Re-Elected, Isn’t He?’”—and that one thing is the fact that people are asking that question a lot. The fear is palpable. The fear is real that somehow the Democratic Party will fail to the meet the unique danger posed by the incumbent president.

Fear can be a powerful motivator, but fear also causes people to make bad arguments and promote silly things. Thomas Friedman is afraid, and it shows. His prescription for the Democrats to confront the danger of Donald Trump is well-meaning inanity, the kind you find in a squirrel who hears a hawk and runs around in a circle because it can’t remember where the tree is.

The particular hawk that seems to have set Friedman off this time was the first round of Democratic debates. Friedman watched them and did not like what he saw. He was “shocked.” No, really, he used the word “shocked” five times to describe the ideas he heard from Democrats, which is an interesting word choice considering Donald Trump is the president of the United States. Maybe he expected Democrats to offer the same kind of fiscally conservative, socially moderate, wildly unpopular policies that served Jeb! so very well against Trump?

Dear Democrats: This is not complicated! Just nominate a decent, sane person, one committed to reunifying the country and creating more good jobs, a person who can gain the support of the independents, moderate Republicans and suburban women who abandoned Donald Trump in the midterms and thus swung the House of Representatives to the Democrats and could do the same for the presidency. And that candidate can win!

But please, spare me the revolution! It can wait.

This poor man has it so twisted around that he’s decided it’s the Democrats who are threatening to nominate somebody indecent and insane.