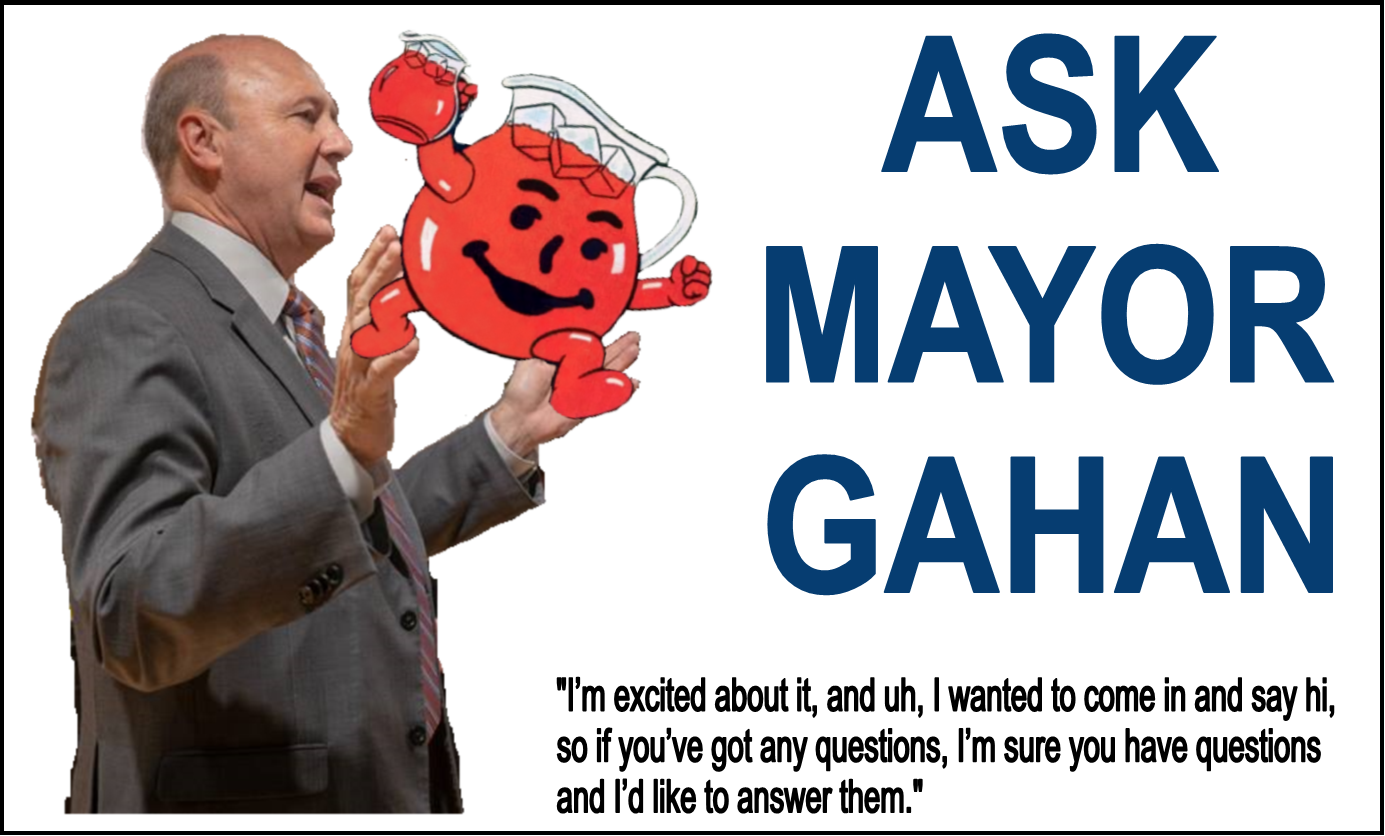 In an effort to show fairness and give equal time to the incumbent, NA Confidential is proud to present “ASK MAYOR GAHAN,” an advice column in which our own Slick Jeffrey tries his level best to help ordinary people lead lives as flawlessly suburban as his own.

Hi, I’m an avid reader who is wondering what you’re reading this summer. My current choice of books is A Heartbreaking Work Of Staggering Genius by Dave Eggers. What’s yours?

Thanks for the compliment. I’m a very stable staggering genius, you know. They love me in England. As for a book, I started reading “Tame Your Terrible Office Tyrant” but I couldn’t see the point. Now each night I have one of the city employees come over to the house and read to me from “Boss Tweed: The Story of a Grim Generation.”

Great bedtime stories are the best, and also being hand-fed grapes and fanned with palm fronds.

What can you tell us about that horrible intersection at Bank and Main Streets? Your city engineer keeps saying there’s nothing he can do, but then he told the Board of Works there’d be an expensive study into the possibility of stop lights. Can’t you just make it a four-way stop for a couple hundred bucks, slow the cars and call it good?

Look, do I come to YOUR house and tell you how to run your own family? Okay, maybe I do, but I’ve had it up to here with citizens complaining about traffic.

First, whenever one of my employees lies, be aware he or she is doing it for me out of love and affection because my minions adore me, especially when I bring them Kool-Aid and Rice Krispies Treats. This is another way of saying that lying is what I make them do to keep their jobs.

Secondly, Mister Smarty Pants Strong Towns Member, do you have any idea how much of a campaign donation I get from assigning stop signs to the Street Department to erect (excuse my French, Soos)?

None, that’s how much. But that stop light study should bring in a thousand tasty smackers.

About two weeks ago, our 5-month-old puppy began stepping into her water bowl, splashing the water around, and flipping the bowl over. She then likes to play in the water that is on the floor. (It’s not an issue with her food bowl.) We’ve taken to holding a small Tupperware container that she can drink out of until she splashes, and then we take it away. This is not sustainable. What can we do to keep our house dry?

Don’t you love Walt Disney? I mean the superhuman man himself, not just his fantastic empire of life-altering imaginary escapist theme parks.

Did I tell you that MY favorite hit song from Great Uncle Walt’s archive of movies is the very same one as his, called “Feed the Birds,” about the pigeon lady in Mary Poppins?

This great man liked the song so much that he’d drop by the music department office just when they were busiest and request a personal performance of “Feed the Birds,” and if anyone griped, he’d fire them.

Try this with your dog. If it doesn’t work, there’s always a TIF area. Now if you’ll excuse me, plenty of beaks need wetting.

Mayor Gahan returns next week to answer, accept donations and fill out your absentee ballot. Previously: