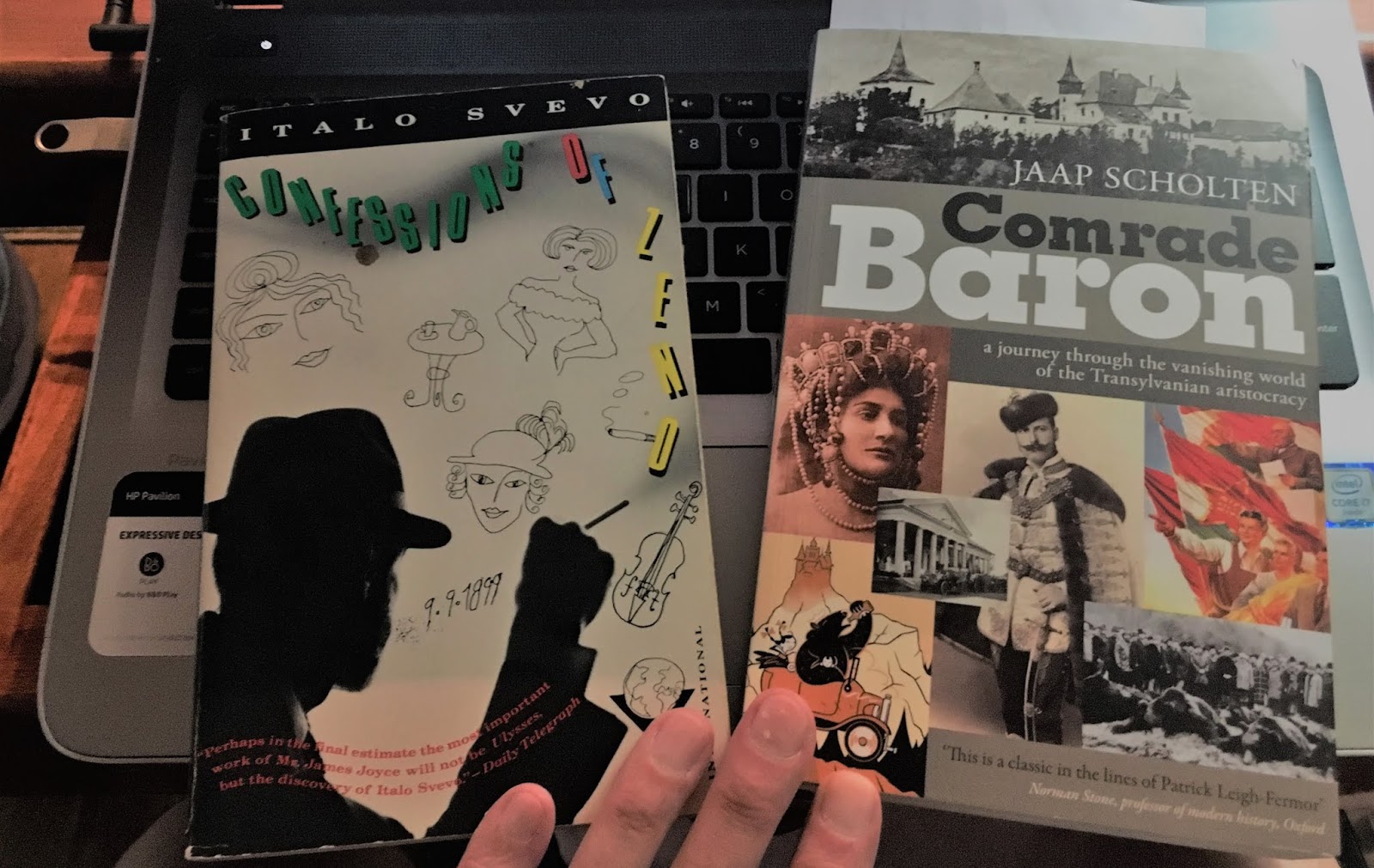 Confessions of Zeno, these days properly rendered in English as Zeno’s Conscience, is a novel written by Italo Svevo (a pen name), a businessman of Italian, German and Jewish ancestry, who for most of his adult life lived in Trieste. The city was part of the Austro-Hungarian empire at the time, but since the conclusion of World War I it has been Italian.

Svevo labored in obscurity as a writer until his friendship with James Joyce, a pre-war resident of Trieste who tutored English there, bore fruit at war’s end. Joyce touted Zeno to his literary acquaintances in France, and their support brought overdue recognition to Svevo.

The central character in the novel is Zeno Cosini, a fiftyish Trieste businessman who has recorded remembrances of his life at the behest of his psychiatrist. We learn of his upbringing, unbreakable smoking habit, relations with father, the courtship of his wife, relations with his mistress, and business ties with a brother-in law. Zeno is a well-meaning but unreliable narrator. The single best review I’ve found of Zeno’s Conscience is by James Woods at the London Review of Books. It’s well worth your time.

The great modern novel of the comic-pathetic illusion of freedom is Confessions of Zeno (to give it its familiar English title), which first appeared in 1923. Italo Svevo’s novel belongs recognisably to the comic tradition of Don Quixote and The Good Soldier Svejk, a comedy defined by Schopenhauer (a great influence on Svevo) as residing in the incongruity between our concepts and objective reality. Both Quixote and Zeno are fantasists, the former antique, religious and chivalric, the latter modern, secular and bourgeois. Quixote wants to serve the world, to set it to rights, and fails in the task; Zeno wants only to serve himself, and largely succeeds, though not by trying. Quixote wills, and fails magnificently; Zeno waits, and succeeds farcically.

Confessions of Zeno moves between moral correction and tragic pathos, between the bracing spectacle of vanity and the sad prospect of an imprisoned self acting as if it were free.

In short, Zeno is a highly modern man.

I’d read this novel before, some twenty years ago, and decided to revisit it owing to our upcoming visit to Trieste in late fall. I recalled much of the narrative, though by no means all. However the final chapter was a genuine gut punch, of which I remembered very little.

This chapter is written by Zeno as a diary and a postscript, a few years after the bulk of the narrative. It is 1915 and Italy finally has switched sides from Germany and Austria-Hungary to the Allies (the UK, France and Russia), with the country’s prime war aim the seizure of territories precisely like that of Trieste and environs.

Zeno becomes enmeshed in the local outbreak of war, at first almost comically, then with an almost dignified acceptance, concluding with an observation about mankind’s propensity to pursue destruction that comes very close to summarizing the entirety of the time elapsing on this planet since Svevo composed the words, through the present day.

Next up for me is non-fiction: Comrade Baron: A Journey through the Vanishing World of the Transylvanian Aristocracy. As one reviewer notes, “Comrade Baron is a highly personalized defense of aristocracy.”

A Dutch journalist arrives in Budapest just after the fall of communism, meets and marries a Hungarian countess with roots in Transylvania (prior to WWII an almost feudal domain of Hungary, with the Hungarians atop the ethnic jumble, and since then a part of Romania) and becomes fascinated by the now vanished Hungarian nobility.

My first and only visit to Transylvania (and Bucharest) came in 1997, and was duly transformative. I’ll concede to giving no thought whatever during the visit to the plight of the landed aristocracy and their vanished way of life.

The book should be an interesting supplement.