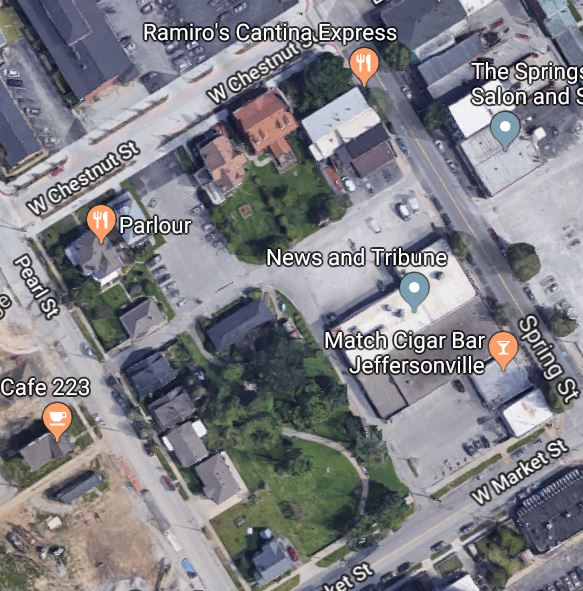 And all they can think about is their cars.

Last week the Jeffersonville newspaper broke a Jeffersonville story. Given that today most readers are bedazzled or engraged by visiting oligarchy, let’s revisit.

Developer Steve Resch, owner of Resch Construction, is planning to open the venue near the corner of Pearl and West Chestnut streets, just behind Parlour. Right now, Resch said not many details are available, as he is still in the planning stages, having hired architects to do landscape and structural work on the properties.

If Jeffersonville is anything like New Albany, there is ample parking in reality, if not in the perception of people who’ll drive to the end of a fifty-foot driveway to pick up the snail mail.

I don’t know Rita Fleming, but her words here should be inscribed on John Rosenbarger’s forehead.

One of the buildings was sold to Resch by Rita Fleming, president of the Jeffersonville Main Street board of directors. Though recognizing that parking is indeed an issue, Fleming said that the city is walkable and pedestrian-friendly — attributes it should continue to focus on as more developments pop up.

“When you think of downtown in any city, there’s always a question of parking,” Fleming said. “When you put it in perspective, downtown people expect to walk 10 feet to the doors of where they’re going. If you’re in a mall during holiday season, you’re going to walk a lot farther than that, and people don’t complain. Certainly for individuals who have trouble going longer distances, it’s an issue. We’re a very walkable community. We’re pedestrian friendly. Maybe we should start thinking about how we can make our community more bike and pedestrian friendly so people will come to our area without undue hardship, even as our city continues to flourish.”

Perhaps the only predictable parking problem shared by both cities is the propensity of business owners and their employees to use customer spaces for their own vehicles.

Resch noted that from his perspective, the lot is mostly used by Parlour employees and some of its patrons. Once everything is all said and done, he doesn’t believe its absence will cause any problems. “It is a good project,” Resch said. “It’ll be an asset and a destination for downtown Jeff.”

Best wishes to Steve, Jacob and their great crew.