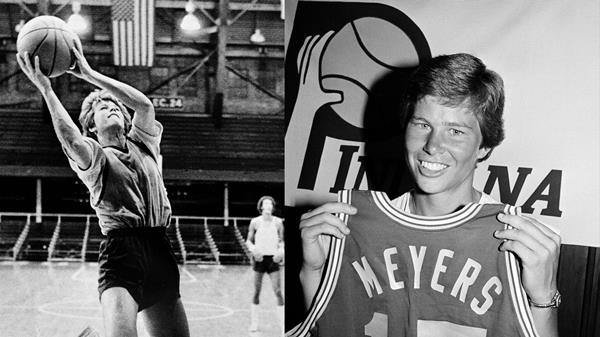 I have little recollection of this story, but it’s a good one. If you’re wondering, the Pacers were 38-44 the previous season.

40 years after trying out for the Indiana Pacers, Ann Meyers is still blazing trails, by Ben Rohrbach (Yahoo Sports)

The press pulled no punches.

“Well, in case Ann doesn’t make it,” Washington Post columnist Dave Kindred wrote in 1979 of Ann Meyers, the first woman to sign an NBA contract, “the Pacers say she’ll stay with the team ‘in some capacity,’ which could mean, I guess, she’ll cook pregame meals for the real players.”

“This whole thing was done in L.A. by our owner, and I can’t possibly see how this can help us,” Pacers forward Mike Bantom told The New York Times 40 years ago on Sept. 5. “I think when you’re trying to build a winner, this is no way to convince our fans that we are serious about our cause.”

“It’s utterly ridiculous,” Werblin said of Meyers’ Indiana tryout. “It’s disgraceful. I don’t think the commissioner should condone it. I think it’s bad for the image of pro basketball. It’s a travesty.”

What few realized then and is only now coming into focus on the 40th anniversary of the day she signed a one-year, $50,000 contract to join the Indiana Pacers’ 1979 rookie camp: Ann Meyers Drysdale opened doors for a generation of women in basketball, and at 5-foot-9 she still stands tall in the game, long after her critics made exits. In order to understand how she got where she is today — a trailblazing front-office executive and broadcaster for the Phoenix Suns and Mercury — Yahoo Sports asked her about a door they tried to shut before it opened …