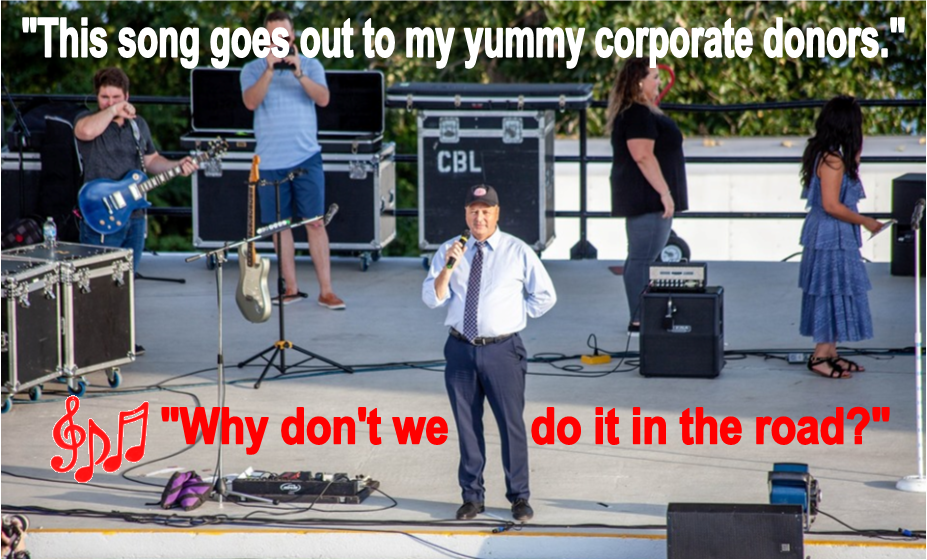 Since the year of Our Dear Leader 2015, I’ve been constantly reminded that critiquing the local chapter of the League of Women Voters isn’t allowed.

Alas, I’m not a very good listener, and occasionally stubborn when I do, but at least I can “anchor” my point of view to personal experience four years ago, when I ran for mayor as an independent and learned very quickly that anyone differing with the two-party local patronage system cannot expect level treatment from those dedicated to the system’s perpetuation.

In short, Jeff Gahan was doing his best in 2015 to avoid any semblance of debate, and the League was more than happy to enable him (a) by holding its sponsored debate on his own home court, the TIF-fueled Pleasure Dome (Silver Street Park), and (b) refusing to change the date of the debate when the GOP’s Kevin Zurschmiede couldn’t attend owing to his son’s wedding, which had been planned months in advance.

Gahan is far more energetic in ducking debates than keeping campaign promises from 2011.

… In the assumption that Kevin Zurschmiede would be out of town for his son’s wedding, Jeff Gahan carefully planned his mayoral debate schedule to avoid any unmanageable situation requiring the three of us to appear together, accepting invitations to events staged by the New Albany Housing Authority (Sept. 22) and the League of Women Voters (24th), and declining to participate in what obviously stood to be the most substantive and challenging, debate, as organized by Leadership Southern Indiana on the 29th.

Gahan already has refused to attend the Southern Indiana Realtors Association question and answer luncheon. Another such mayoral chat, put together by the Builders & Development Association, was cancelled. Had it been held, Gahan would not have been there.

(Zurschmiede was unable to alter his travel plans and couldn’t) come to Silver Street Park (Gahan’s de facto “home” field) for the League’s debate, which will feature questions provided in advance from LWV organizers like Linda Moeller, who also is Gahan’s appointee as controller and openly acknowledges her position as high-ranking Gahan campaign worker.

Thus far, the League has managed to misspell Zurschmiede’s name twice (differently each time) on promotional materials, which incorporate an 8-year-old photo of me, when literally dozens of more recent photos can be found merely by Googling my name and clicking on Images.

In short, the only debate at which all three candidates will appear is a softball toss orchestrated by Democrats supporting Gahan, who conveniently wave the League’s “impartial” banner. It’s a farce, and needs to be recognized as such, but I wouldn’t think of missing.

Somewhat hilariously, the League’s guiding forces replied to my questions at the time by denying they were biased, and yet each of them in turn had a reason to seek the avoidance of Slick Jeffie’s well-documented nocturnal wrath. One of them would be seeking funds for her organization from Gahan, and another was running Gahan’s shill ads in his declining newspaper. A third actually owed her very government job to Gahan’s political patronage machine.

Impartial? hardly. It was a shambles, as Jeff Gillenwater summarized.

Kevin (Zurschmiede) actually voted against the expenditure for the park and many others questioned it, including Roger. Gahan, in turn, has been continually using it as a prop for campaign purposes. The League declaring it something beautiful of which to be proud, a very pro-park and, in context, pro-Gahan stance, isn’t exactly impartial so it’s not difficult to see why many people are questioning venue choice. I think the brewery that Roger helped build is great and an asset to the community but I wouldn’t suggest that holding a mayoral debate there would be impartial. The same could be said of Kevin’s properties. The park is technically public but the association is plain. Given the low number of New Albany forums involving all the mayoral candidates, it doesn’t seem unreasonable that a single alternative date and/or location could be explored without conflicting with another event. Besides the LSI debate, what other neutral events involving all the mayoral candidates are scheduled between now and the November election that would make it difficult to find another date or location? The library, the Carnegie Center, IUS, or any of the public schools would be neutral. Is there really not an alternative date available at any of them over the next couple of months? At best, this is an honest mistake but it’s not too late to correct it.

Of course, none of it was corrected, and the League’s homer-fest at the Gahan-built Silver Street Park was my only direct debate with the duck-and-cover mayor in 2015. The majority of assessments agreed with me that I smoked his ineffectual posterior, but that’s neither here nor there.

In 2019, the League’s sponsored candidate gatherings don’t even appear to resemble “debates,” having been dumbed down into pablum, which predictably is just fine by the Tom May Evangelism Guidepost (formerly known as the News and Tribune).

… But how do we know what any of (the candidates) are thinking, what their ideas are, their priorities, and if they match ours?

We can’t rely on glossy fliers or scripted political ads to tell us what we need to know. We need face time.

Fortunately, the South Central Indiana League of Women Voters is making it easy for us to connect with candidates who want our votes.

Beginning Thursday, the League of Women Voters is hosting a series of candidate forums — in our own back yards. Charlestown, New Albany / Georgetown, Jeffersonville and Clarksville voters can hear directly from candidates in their communities.

The best part is that candidates get the chance to speak directly to us, and we can ask them questions about issues that are important to us. No filter. Just us, and them …

Did Hanson’s apologists ever tell us how much money Gahan spends on advertising?

I didn’t think so.

Meanwhile, the Los Angeles Times gets it. You can talk to local representatives any time. I disagree often with New Albany’s council reps, but as far as I can tell, they all answer phone calls — and it’s likely candidates will, too.

What we cannot experience is an actual debate between candidates of differing views, and now the League no longer is interested in this instructive concept.

… Nothing beats the potential of old-school debates to reveal and humanize the men and women behind the glossy ads and focus-group-approved slogans.

Admittedly, debates can often seem like well-rehearsed exercises in reciting talking points and staying on message. Still, it can be tremendously informative when two candidates vying for the same important job stand (or sit) next to each other in front of an audience to answer questions, describe their policy differences and, well, debate. Unscripted forums offer a rare glimpse into candidates’ foundational character traits and temperament. They can also indicate how well a person might handle the unexpected challenges that arise once he or she is in office.

It bears noting that in 2015 the League refused to consider requiring the candidates to debate “blind,” insisting the participants receive the debate questions in advance. C-minus students like Gahan need help, I guess.

It’s 2019, and the Tom May Bible Study Digest covered the first candidate gathering in Charlestown.

Political forums kick off in Charlestown ahead of election, by Tara Schmelz

CHARLESTOWN — About 75 Charlestown residents filled the downtown square Thursday night to hear from candidates seeking local office, as part of the first of a series of forums hosted by the South Central Indiana League of Women Voters.

However, something was missing.

Wonderful. H.L. Mencken said it best — figuratively, of course: “Every normal man must be tempted, at times, to spit on his hands, hoist the black flag, and begin slitting throats.”

That’s my view of the best course in addressing the two-party system.