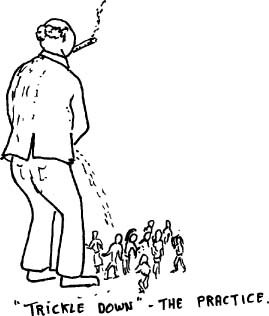 Because the way out from detrimental neoliberalism isn’t more of the same.

What we are finding with Neoliberalism Economicus is that it is not adaptive for individuals or societies. Rather it works like a parasite that bleeds energy away from its host with false stories that appear beneficial at first but are ultimately deadly. The virus grows by perpetuating fictions. These fictions are attractive because their appeal does not rely on facts but rather on the need for power and status. The neoliberal narrative has remained compelling in part because it appeals to powerful interests in society and those who emulate them.

Can someone find us a big-ass trash can, ashcan, ash heap, dustbin, dust heap or garbage heap? We’ll be needing one, the other or them all to deposit the remains of neoliberalism.

The insidious ideology pushing us towards a Brexit cliff-edge, by George Monbiot (The Guardian)

At first sight it’s incomprehensible. Why risk everything for a no-deal Brexit? Breaking up their own party, losing their parliamentary majority, dismantling the UK, trashing the economy, triggering shortages of food and medicine: how could any objective, for the Conservative and Unionist party, be worth this? What good does it do them?

Yes, some people will benefit. To judge by recent donations to the Conservative party, some very rich people approve of Boris Johnson’s policies. A no-deal Brexit might favour hedge funds that thrive on uncertainty, financiers seeking to short the pound, vulture capitalists hoping to mop up cheap property if markets collapse. But the winners are likely to be greatly outnumbered by the losers, among whom are many powerful commercial interests.

We make a mistake when we assume that money is the main motivation. Our unreformed, corrupt and corrupting political funding system ensures it is an important factor. But what counts above all else is ideology, as ideology successfully pursued is the means to power. You cannot exercise true power over other people unless you can shape the way they think, and shape their behaviour on the basis of that thought. The long-term interests of ideology differ from the short-term interests of politics.

This, I believe, is the key to understanding what is happening today. The Brexit ultras in government are not just Brexit ultras. They are neoliberal ultras, and Brexit is a highly effective means of promoting this failed ideology. It’s the ultimate shock doctrine, using a public emergency to justify the imposition of policies that wouldn’t be accepted in ordinary times. Whether they really want no deal or not, the threat of it creates the political space in which they can apply their ideas …