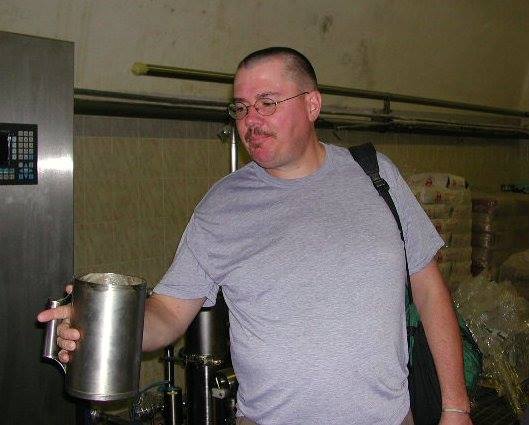 That’s me in the cellars at the Samson brewery in České Budějovice during the glorious 2004 motorcoach tour. I believe it was a strong dark lager, and my recollection is that it was very tasty. It was fun visiting both the city’s breweries, Samson and Budvar.

Meanwhile Evan Rail’s essay about the current prospects for these two companies is wonderful. In the early 1990s, the FOSSILs homebrewing club was a tad politicized on the topic of Budvar — I’ve no clue why — and a favored theme was protecting the brewery from the predations of rabid St. Louis-based imperialists, if necessary by forming international brigades to travel to Southern Bohemia and guard the brewhouse.

It’s all summarized in this catch-all post of mine from 2012.

As the Budweisers still battle, let’s look back to 1997 and “Anheuser-Busch, Gone Home.”

… The defunct St. Louis Cultural Center wasn’t a cafe. It was meant to be a nice, big, fat, succulent carrot to be waved in the deprived, grubby faces of the citizens of Ceske Budejovice, those only recently roboticized socialist drones, and one meant to entice them, to inflate (and fellate) their expectations, and to purchase their acquiescence as Anheuser-Busch negotiated for a stake in the city’s famous brewery. It was the American imperialist’s Trojan Horse, its magnanimous surface glitter concealing the industrial technologists, the glassy-eyed bean counters, the soulless pitch men and the corporate strategists without whom A-B would be nothing more than a mere brewer of second-rate beer.

Rail considers the century-plus-old controversy over the “real” Budweiser, then delivers the sweeping curve, because what none of us considered was the possibility that AB InBev would take over not Budvar but Samson, and proceed to make it better for primarily local distribution.

It doesn’t sound threatening at all.

The Original Originals — In the Czech Republic, the Budweiser War Opens an Eastern Front, by Evan Rail (Good Beer Hunting)

Beer trademark wars might feel like the result of a crowded contemporary marketplace, but breweries have been filing C&Ds since way before Stone sued Keystone. That high-profile case seems to be taking a while, but it pales in comparison to the infamous global battle over the name “Budweiser,” which has gone on for about 112 years—long enough to merit its own Wikipedia entry. The commonly told version of that battle says that the original Budweiser actually comes from the Czech city of České Budějovice, a spire-capped, tower-filled South Bohemian burg that German speakers traditionally call Budweis. Unfortunately, the commonly told version is wrong.

As the story goes, in 1876, a St. Louis brewery started making a Lager it called Budweiser, meaning “from Budweis,” after the famous beer from the historical Czech town. The “original” Budweiser, it notes, is actually Budvar, a small Czech brewery that has been fighting the giant Anheuser-Busch—and now its parent company AB InBev—on multiple fronts for the right to use the Budweiser name since before World War I.

That version of the story has a couple of big holes, starting with the fact that Budvar—aka Budweiser Budvar—was founded in 1895. The American version dates to 1876. If the Czech Budweiser is 19 years younger, you might ask, how can it be the original?

Like many tales involving language, ethnicity and identity in the palimpsests of Central Europe, the answer isn’t exactly straightforward …

… Cynics will probably say there has to be some kind of long game in play, a chance for AB InBev to muddy the waters or gain some leverage. That might be true. But at the most basic level, it’s hard not to appreciate that a floundering Czech brewery with a boatload of history was saved when the Brazilian-Belgian giant bought Samson. Additionally, it’s easy to like what’s in the glass: I tried a grocery-store-purchased Samson this week, and it was delicious.