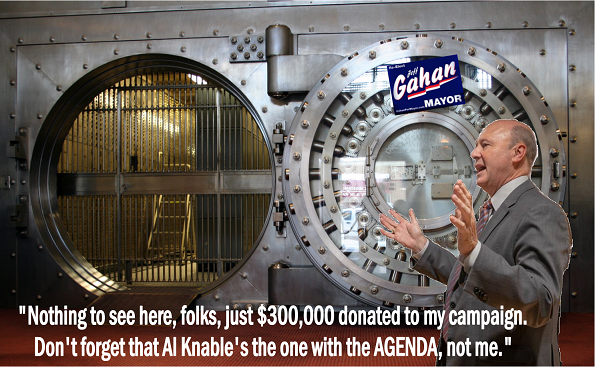 “Don’t forget that Gahan is legally entitled to convert those campaign funds into personal funds. All he must do is pay the income taxes on them. He can make charitable donations, political donations, or buy groceries with that money. In other words, the excess monies are bribes. That’s not his fault. It’s the way campaign finance works in Indiana.”

$140,000 of these expenditures has gone to companies and individuals outside New Albany’s city limits.

Gleaned from the expenditures side of the October 18 CFA-4 filing — remember, Cherished Leader isn’t done yet; this accounts for only the first three quarters — here are a few highlights, restricted to expenditures of $2,000 or more, year-to-date.

* To establish context, I’ve appended a few statistics from the US Census Bureau.

In NA’s history, no candidate for mayor has raised this much money (I’ll be chipping away at donor numbers during the coming days), and no one has spent this much money. Gahan says he’s moving the city forward, but the numbers don’t lie even if he’s prone to doing so.

Jeff Gahan is moving himself forward by means of the most pervasive pay-to-play political patronage system ever seen in this city during modern times. It is one built to benefit donors from far and wide, political cronies and his own family. Gahan’s vision? It’s New Albany as a Banana Republic — with Gahan himself remaining Top Banana.

Now for the numbers, in ascending amounts — and boy, do they ascend.

$2,950 to Susie Gahan (wife of the mayor) for “operating expenses”; these are recurring expenditures and literally thousands of dollars have been itemized this way during the past eight years.

$3,744.52 to Warren Nash for rent. The former failed mayor and exalted Democratic Party grandee is charging Gahan only $600 monthly for use of his dilapidated building on Bank Street, presumably including utilities (which his previous Floyd County Democratic Party tenant was seldom able to keep up to date).

$4,480 to Meyer Consulting LLC for advertising (there are several businesses with this name and it isn’t clear which this is).

$4,482.80 to the Floyd County Democratic Party for … basic life support? Interestingly, the only other Democratic candidate whose name appears on the expenditures ledger of the 2nd and 3rd quarter CFA-4 is none other than Matt Nash ($250 from the Genius of the Floodplain), who is Warren Nash’s son. Perhaps the NAHA job wasn’t enough.

$4,810.98 to Grace by Design for signs, stickers, shirts, bags and dog bandannas. Grace by Design is located in Louisville, and the owner appears to be Andrew Delahanty, who might even be a genuine “progressive,” which is surprising given the way Gahan works assiduously to avoid being viewed as one, probably because he isn’t.

Grace by Design’s Facebook page hasn’t been active in a while, but circa 2012 the company donated signs to the Occupy movement in Louisville. 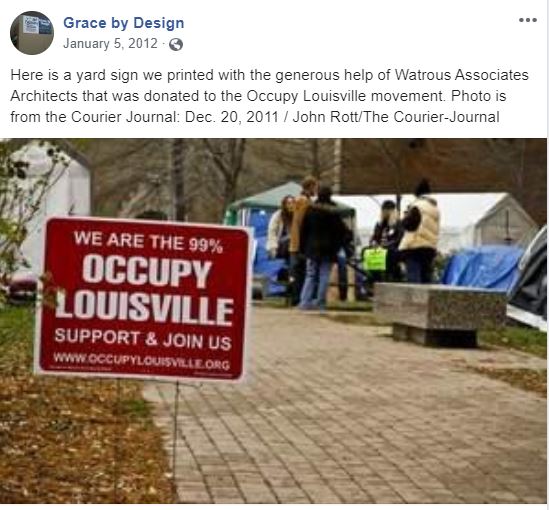 $6,000 to Kristen Self for “fundraising.” Self lives in the Indianapolis area and was the finance director for the Liz Watson congressional campaign, billing herself as a “campaign consultant.”

$6,825 to ProMedia for videos and billboards. During 2019 ProMedia also has donated $3,000 to Gahan4Life for “in-kind” professional services. That’s a lot of money; this is campaign-related, so wouldn’t you love to see the contract for no-bid “professional services” between the city of New Albany and ProMedia?

$8,678.52 to Valley View Golf Club for … new balls? There is no explanation for this expenditure.

Now for the heaviest hitters.

$15,000 to 76 Words (Washington DC): “We craft campaign strategy — and turn that strategy into television, radio and online communications to elect Democrats and support progressive causes.”

$40,000 to Media Fortitude Partners (Jersey City NJ) for this: “Media Fortitude Partners — a revolutionary media buying agency — will combine traditional and evolving digital platforms to efficiently and effectively win political campaigns from local to national levels. MFP uses the next generation of media buying solutions and targeting technology to achieve each of our clients’ goals, particularly in the political realm.”

$57,746.05 to Terris Barnes & Walters (San Francisco, California): “Founded in 1988, Terris, Barnes & Walters is a full-service campaign firm, specializing in general consulting and direct mail. Our mail philosophy is simple: we believe any campaign has a maximum of five seconds from mailbox to recycling to make a voter decide to open your mail and keep reading — and you’re competing for readers’ attention not just with other political media, but commercial appeals as well. Since 1988, we have created high-impact mail that grabs and holds voters’ attention — and has helped win over 350 successful campaigns nationwide.”

Allow me to observe that Jeff Gahan is not publicly listed as a client at TB&W. Is he shy, or does this imply that while $57,000 is substantially more than the median household income in Nawbany, it’s chump change for a major national slush spewer in the Bay Area.

* A few statistics from the US Census Bureau.