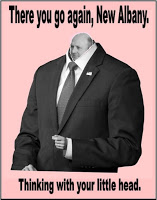 Bob Lane, director of the New Albany Housing Authority for 16 years, didn’t pass muster with the petulant Genius of the Floodplain, but he’s plenty good enough to have a thriving consultancy, and now to help stabilize the mess in South Bend left behind by a director who appears to have been just as corrupt as Gahan.

And, by sheer coincidence, it’s the city steered in absentia by Pete Buttigieg, centrist darling of the ideologically vacuous Gahanites.

There might be a compelling message there, somewhere, but the recurring stench of Gahan’s incumbency keeps clogging the nostrils.

SOUTH BEND — The South Bend Housing Authority board named a new interim director, a month after firing the former head under mysterious circumstances amid a pair of ongoing federal investigations.

Bob Lane, who was the director of the New Albany Housing Authority for 16 years and now runs a public housing consulting firm, will take over as interim director. The board approved a contract with him running through December as it plans to conduct a national search for a permanent executive director.

Previous Executive Director Tonya Robinson was fired last month after the FBI and other federal law enforcement informed the oversight board of “serious” misconduct allegations, the board previously said.

Earlier this year, the FBI raided the housing authority’s office and other properties in South Bend. The Department of Housing and Urban Development inspector general’s office is also investigating the public agency.

In 2017, Lane was fired after 16 years as head of the New Albany Housing Authority in southern Indiana. He said pending litigation prevented him from speaking specifically on his dismissal.

According to local media reports and Lane’s breach-of-contract lawsuit against the New Albany Housing Authority, Lane was fired after expressing skepticism of a plan to demolish more than 600 units of public housing in the city. A complaint filed by Lane in Marion Superior Court last year alleges board of commissioner members “apparently became disenchanted with him in the wake of Lane’s assessment of the City of New Albany’s 13-point plan with (the New Albany Housing Authority) to restructure its public housing.”

“Even though Lane had expressed concern with several of the points, he never subverted the Board’s authority nor stated he would not comply with the Board’s decision,” the legal document states.

Following his firing, reports noted residents were shocked at his firing and that the new director of the housing authority violated HUD regulations and orders relating to oversight of the authority’s finances.

The South Bend authority has been plagued in the past by financial reporting problems, poor inspection results and sub-par living standards in public housing units …