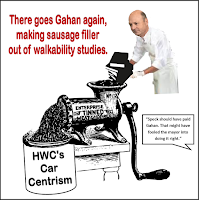 “We can’t let car companies again shape the vision for our future; if we don’t dream big now, we may never get the chance again. Let’s let’s elevate a different kind of transportation infrastructure that recognizes universal basic mobility as a human right and brings it to every man, woman, and child. If we don’t think of micromobility as the serious solution to a whole host of societal and environmental problems, then who will?”

I’ll never forget, back when we were asking only that City Hall implement the entirety of Jeff Speck’s street grid network proposals — which in addition to calling for a reversion to two-way traffic prioritized a state-of-the-art downtown bicycle network — these potentially transformative improvements were blithely characterized as outlandish by Greg Phipps (councilman) and Greg Roberts (ESNA). Modernity was cackled out of the room as going way too far for primeval New Gahanians, not just by these two, but by other “progressives” who seldom are.

By their unwillingness to do the homework, to try to understand exactly what Speck was aiming at, and to do battle … with their abject eagerness to stroke Dear Leader’s ego … community “leaders” like these abetted Jeff Gahan’s whopper of a bait ‘n’ switch on the street grid. Promises abandoned, Gahan commissioned HWC Engineering to gut a wonderful walkability and biking enhancement program, recasting it into yet another re-election omnibus paving project, retaining the basic two-way reversion but rendering it almost useless through timidity and incomprehension.

Then again, when’s the last time you’ve seen Gahan or any of his sycophants walking or biking?

Yes, Dear Leader gifted us with two-way streets, and they’ve been mildly effective, albeit neutered by constraints into insensibility. Perhaps that’s why the drivers are still treating downtown streets like race tracks.

But that’s fine. Just push that button and the drivers from elsewhere will let you cross the street, just so long as it doesn’t add seconds to their cross-town commute.

Why We Need to Dream Bigger Than Bike Lanes, by Terenig Topjian (CityLab)

In the 1930s big auto dreamed up freeways and demanded massive car infrastructure. Micromobility needs its own Futurama—one where cars are marginalized.

There’s a quote that’s stuck with me for some time from Aaron Sorkin’s The Newsroom: “You know why people don’t like liberals? Because they lose. If liberals are so f***ing smart, how come they lose so goddamn always?”

American urbanists and bike advocates are smart, or at least well informed. We know how important cycling is. We are educated about cycling cities in other parts of the world and how they are so much better for health, well-being, economics, traffic, pollution, climate, equity, personal freedom, and on and on.

But if we’re so smart how come we lose so goddamn always?

Why is the best we seem to be able to accomplish just a few miles of striped asphalt bike “lanes,” or if we’re lucky, a few blocks of plastic pylons—“protected” bike lanes?

Our current model is to beg for twigs
More often than not, bike infrastructure is created reactively. Typically in response to a collision or near collision with a car, an individual or advocacy group identifies a single route that needs better infrastructure. We gather community support and lobby local officials for the desired change, trying as hard as we can to ask for the cheapest, smallest changes so that our requests will be seen as realistic.

What’s the problem with this model?

It’s like imagining a bridge and asking for twigs—useless, unable to bear any meaningful weight, easily broken. And it’s treating bike infrastructure like a hopeless charity case.

This makes bike infrastructure seem like a small, special-interest demand that produces no real results in terms of shifting to sustainable transportation, and it makes those giving up road space and tax dollars feel as though they are supporting a hopeless charity.

But when roads, highways, and bridges are designed and built, they aren’t done one neighborhood at a time, one city-council approval at a time. We don’t build a few miles of track, or lay down some asphalt wherever there is “local support” and then leave 10-mile gaps in between.

And yet this is exactly how we “plan” bike infrastructure.

Bike lanes are intermittent at best in most North American cities, and since they are usually paint jobs that put cyclists between fast-moving traffic and parked cars with doors that capriciously swing open, only experienced riders brave them. The lanes are easily blocked anyway, by police, delivery trucks, and film crews, if not random cars banking on the low likelihood of being ticketed.

This kind of bike “infrastructure” doesn’t actually do very much to protect existing cyclists, let alone encourage and inspire the general population to start cycling.

Why are we settling for easily broken twigs? The total number of people on bikes and other micromobility modes like scooters and skateboards is large and growing. An enormous force has been divided and conquered, splintered among thousands of neighborhoods …

Divided is the way we’re kept by the country’s Gahans. It is purposeful. If you intend to insist on being characterized as a “progressive,” maybe a good place to start is to progress past the insipid lies and self-aggrandizing campaign finance schemes of the local C-minus students, and start standing up for grassroots solutions calculated to improve the place where you live.