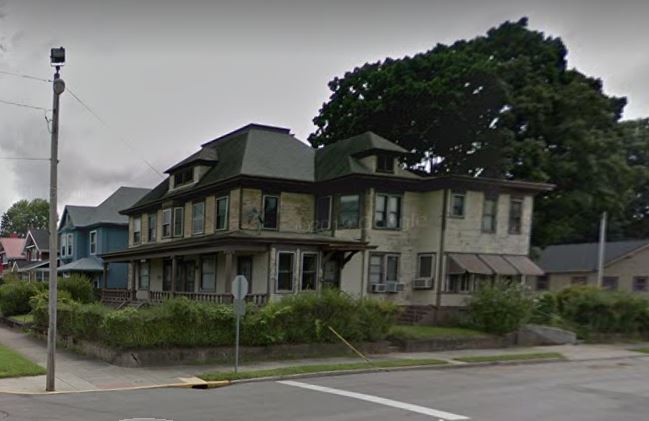 It’s unlikely the owner will be stepping forward to save the house, given that his serial neglect over a period of years surely contributed to its demise, but maybe miracles still happen.

TIF-buffing, anyone? Duggins’ personal “Lots-R-Us” housing authority might be able to take it over for voucher housing.

Meanwhile David Barksdale’s right about those idiotically vacant corner lots scattered throughout town where buildings ought to be, with perhaps a dozen in Councilman Phipps’ 3rd district alone.

So of course everyone involved happily agreed to build parks at the corner of 11th and Spring, and the corner of Pearl and Spring — and of course the corner of State and Spring remains a superfluous parking lot, and there’s the biggest waste of what should be prime real estate in the entire city where the Farmers Market was built …

True, the city can’t control what happens with all of them, but it’s too bad we can’t get it right for the ones we do.

… The corner-lot house falls within New Albany’s historic Mansion Row, adjacent to St. Paul’s Episcopal Church on the west and Naville & Seabrook Funeral Home on the north. It was built in 1910 by Edward and Mary Hackett, a family that was in the furniture manufacturing business. Edward died in 1922 and the home was subdivided into apartments in 1926, years before the bulk of larger building were cut into multi-family units during World War I and II.

Mary remained in control of the property until around 1940, when it was purchased by Vincent Knabel.

Floyd County Historian Dave Barksdale said that first and foremost, he’s glad no one was seriously injured or killed in the fire. But he’s concerned about whether the 109-year-old building will survive the damage.

“Corner buildings are very important to a street and when you lose a corner building, it’s a shame because you’re losing the anchor of that block,” he said. “Depending on what the owner is intending on doing, there could be a good infill project go in there. It would be great if it could be saved, but just from my vantage point, I think it would be awfully hard to save.”

Greg Sekula, director of Indiana Landmarks Southern regional office, said he has hope it can be restored.

“It certainly kind of makes your heart sink, particularly when the building is in a historic district and it is a contributing property within the district,” Sekula said.

He said the house is a good example of framed colonial style and was one of the more prominent homes on the street when it was built. As an income-producing property, he said there are federal grants available to help with restoration.

“You don’t want to see a gaping hole there,” Sekula said. “I’m hoping that either the owner or someone else would step forward and try to save the building and rebuild the structure…hopefully the structural integrity is still intact which would make rebuilding feasible.”

The Floyd County Assessor’s Office confirmed that the property was last sold to Timothy Hollins in 1993. Hollins was unable to be immediately contacted for comment.