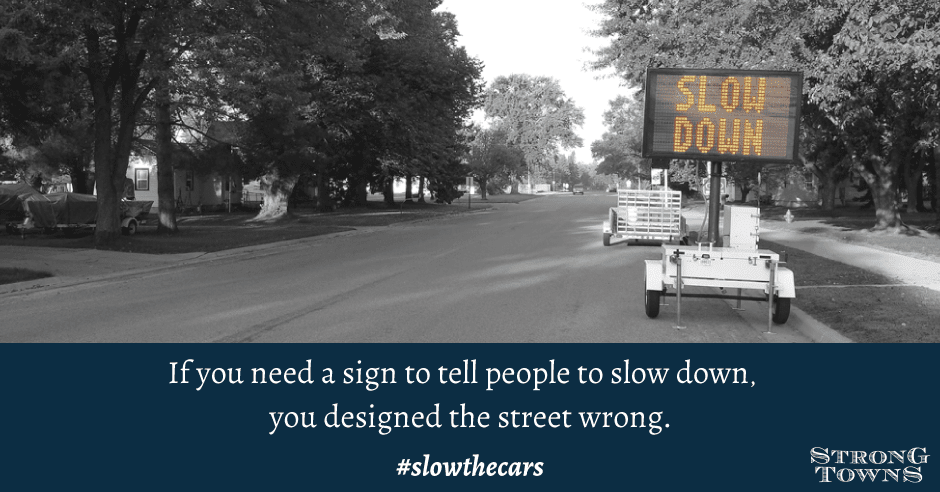 This is a good summary of the Strong Towns philosophy as interpreted from a conservative perspective. As Charles Marohn has toured the country promoting his book, he seems to be in position to be questioned from “both” sides (liberal and conservative), which might be the best indication yet that he’s on to something.

On tour, the ‘Strong Towns approach’ weathers some criticism and provokes plenty of thought.

GREENBELT, Md.—As urbanist and activist Charles Marohn spoke here last month, expounding on the “spooky wisdom” in his Strong Towns book, the setting itself made for an interesting coincidence.

Marohn addressed a mostly older crowd in Old Greenbelt’s community center, an impressive art deco building that dates to the city’s founding under a landmark New Deal program. Greenbelt was an early planned community and a public works project, so it’s an interesting place to talk about Marohn’s advocacy of incremental development, and humanity’s coevolution with the traditional city. As such projects go Greenbelt has been quite successful, though it struggles with a once-shiny, now-degraded stretch of sprawl along its major thoroughfare, sometimes dubbed “New Greenbelt.”

Perhaps it is fitting that Greenbelt was platted and built during the Depression, however, because it is the post-Depression era—not the later post-war era—that Marohn identifies as the point when we abandoned the traditional, time-honed approach to building our places. And when it comes to the poster child of urban failure, Detroit, he notes that there is at least one area of agreement: “Detroit is some very different place from anywhere in North America,” he says to laughs. Detroit, however, weathered the Depression better than most American cities, and so, mistaking correlation for causation—and no doubt with encouragement from Detroit’s primary industry—virtually all urban and suburban development henceforth copied the Motor City’s sprawling, automobile-dependent pattern (which, ironically, was itself adopted after the core city was already affluent and famous).

Marohn’s core contention is that, at a high level, that development pattern was itself what bankrupted Detroit and intensified its poverty and decline. Furthermore, because nearly every post-Depression place is built on the Detroit blueprint, America writ large can look forward in 20 or 30 years to the same fate. It’s quite a claim, but it’s based on what appear to be hard and inarguable numbers. We’ve simply built too much stuff per person, far more than tax revenues or even reasonable debt loads can ever maintain. It doesn’t help that we build so much at once—entire neighborhoods built to a “finished state”—so that the cost of maintenance all comes due at once in a tidal wave of decline.

There’s more to Marohn’s idiosyncratic “Strong Towns approach” than municipal finance, however. There’s a fascinating mediation on the traditional city as a sort of complex, adaptive organism that has co-evolved with human civilization; an emergent system with its own rules, not a fragile monoculture. There is deep, time-honed, iterative wisdom embedded in the physical forms of places as built until the 1930s. Every pre-Depression city in the world “charted the same iterative course,” starting with a dirt street and some wooden shacks, and ending, if it got that far, in magnificent architecture and bustling, well-paved thoroughfares. These cities were not created, you might say; they evolved. To Marohn, building a mature city, all at once and to a finished state, is something like trying to turn a bud into a flower. There is something about the architecture of human society that militates against it. “Why is it like this?” Marohn asks. “I don’t know. It’s complex and it’s spooky” …