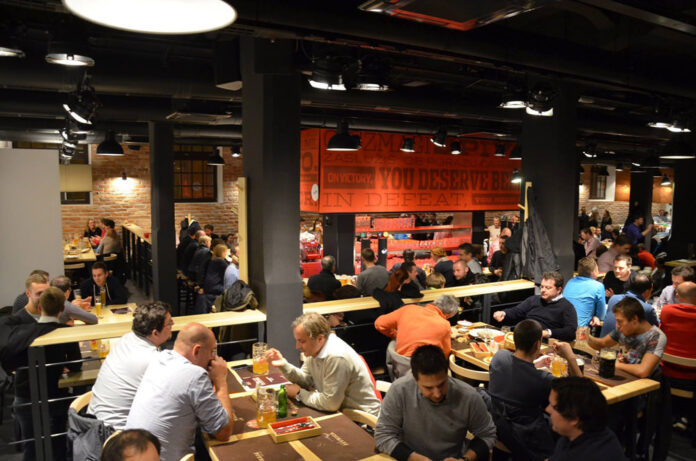 It seems that Ljubljana, Slovenia is a hot spot for craft beer, which also is the case in Tallinn (Estonia), where we visited in 2016.

As recounted earlier, I was much enamored of the local Union Pivo (“beer”) when gliding through Ljubljana in 1987, this being the golden lager from a brewery founded in the 1800s, and not to be confused with Pints&union in New Albany.

Tellingly, today’s Union brewery (owned by Heineken and merged with Laško, another Slovene brewery) has installed a restaurant and pub inside the old malt house, where a small brewing system produces new styles for on-premise drinking. I definitely want to go there.

As for the myriad beer options of the craft variety, this guide looks quite promising. We have three days, which is time enough to skim the surface.

The Ultimate Ljubljana Beer Guide and the Biggest Lie in Slovenia, by Tjaša Janovljak (Prostly)

If you were to hear the phrase “Slovenia’s biggest lie”, you might think that it would have something to do with our tendency to exaggerate our heroic history or to downplay the small size of our country. But that’s not the case. Slovenia’s biggest lie is, in fact, about drinking, and its one I’ve heard my entire life: “Let’s have one beer.”

It should come as no surprise that my fellow citizens have embraced the so-called craft beer revolution like so many others around the world. And, like in many other countries, it began slowly in our capital and spread throughout Slovenia resulting in the unprecedented growth of craft breweries, gypsy breweries and craft beer bars. It got insane – so insane that no sane person ten years ago would have been able to imagine how many different beers are now available. Even people who work in the beer industry aren’t able to provide an exact number of breweries in Slovenia, let alone the number of different beers being produced across the country.

So, to help you get your bearings in Slovenia’s capital, here’s a guide to the best Ljubljana beer bars, breweries, and bottle shops by a born and raised local who appreciates a refreshing pint.