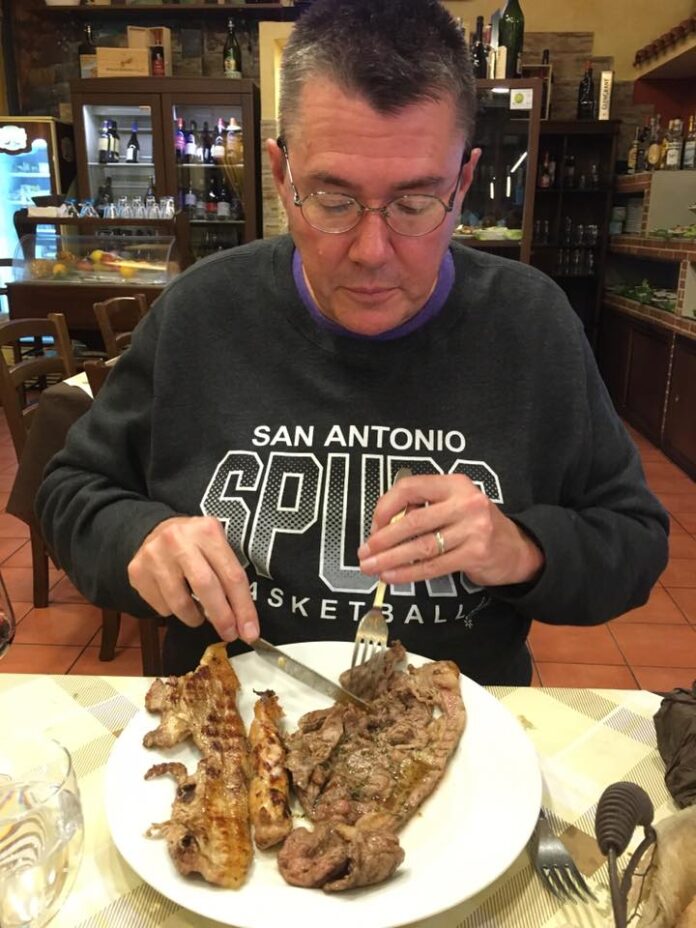 In 2016 we chose to spend the Thanksgiving holiday week in Catania, Sicily. Afterward more than one person asked me, “How do they celebrate Thanksgiving in Italy?”

I celebrated Thanksgiving while in Catania by eating a mixed grill of horse meat. There were no lamentations about the absence of turkey and the fixings; we’d long since stopped bothering with all that, and picked up Chinese on the big day. It was a household tragedy a few years back when Vietnam Kitchen stopped opening on Thanksgiving, although we still go there on Christmas Day.

Prior to Catania, the last time I’d been overseas for Thanksgiving was in 1991, during the English teaching gig in Košice, Czechoslovakia (now independent Slovakia). Given that the traditional “national dish” of Slovakia is bryndzové halušky, or potato dumplings with sheep’s cheese and bacon bits, it’s what I chose to eat on Thanksgiving Day, at a wine cellar with something resembling Tokaj.

For Thanksgiving in 2019 we’re south of Slovakia, in Slovenia. Beer and sausages sound peachy keen to me, but whatever you choose to eat, drink and do today, here’s food for thought.

Why do we celebrate Thanksgiving?, by Soleil Ho (San Francisco Chronicle)

I don’t really know what to do with Thanksgiving.

I enjoy flipping through recipes for sweet potato pie, roasted brussels sprouts and spiced cranberry sauce as much as anyone else, but it’s difficult to disentangle the holiday from our colonial history. It seems like we certainly try our hardest to do so.

When I was in elementary school, my teacher had my class draw straws to divide us up into Natives and Pilgrims; the former made feathered headbands out of brown construction paper, and the latter crafted black buckled hats. I think we sang a song about togetherness. (My mother-in-law, an elementary school teacher in the Midwest, tells me her school no longer does this. Another teacher who works in the North Bay says his school barely acknowledges the holiday in its curriculum. I’m curious to know what other schools do.)

Though one could argue that Thanksgiving can and should be an apolitical occasion, the persistent retelling of history that occurs around the holiday is steeped in our national myth making. We still popularly romanticize the origin of the holiday — and by extension, the origin of the country — as one where pilgrims from Europe broke bread with Native Americans, who freely gave and gave until there was nothing left to give. I’m sure I’ll get more than a few email responses that speak to that fact.

Yet so much ink has been spilled and so much breath has been expended in service of clearing up the story of the holiday. As Dennis Zotigh, a cultural specialist at the Smithsonian National Museum of the American Indian, writes, “Why should Native peoples celebrate Thanksgiving? Many Natives particularly in the New England area remember this attempted genocide as a factual part of their history and are reminded each year during the modern Thanksgiving.”

The responses to his question from Native folks from around the country vary. I was struck the most by one from a reader in Montana: “It’s important to share the whole, true story of the first Thanksgiving… I will say this, The generic idea of Thanksgiving, or taking the time to be with family and friends and give thanks for all the blessings in our lives, the big and small, is a great practice and should happen more often. I wonder how we can turn a negative into a positive? Can we have an honest Thanksgiving? Can we move forward and, if so, where do we begin?”

Is there more we can do than watch as the turkey dinner magazine and newspaper spreads are published on cue?

The idea of tapping Native American thinkers to comment on occasions like Columbus Day or Thanksgiving and surface what may be traumatic experiences for the benefit of a largely non-Native audience feels mostly crass to me, though I think the New York Times’ great piece featuring chef and activist Sean Sherman was a step in the right direction. Here at The Chronicle, we also ran a story over a recent Thanksgiving about how Northern California Pomo and Yurok Indians are striving to restore nearly lost food traditions.

Still, I would rather that Sherman or others get full-on columns in food publications so that, again, that subject matter isn’t relegated to holidays where we want to feel a bit absolved. It’s like a blushing acknowledgment, a wink to show that we can see the bigger picture, but the rest of the holiday goes on without issue.

To backtrack to what the writer from Montana wanted us to consider, what are some ways to reframe the holiday that might make space for all of these contradictions and complications? I’d love to hear from you if you have any suggestions that we could share with your fellow readers.