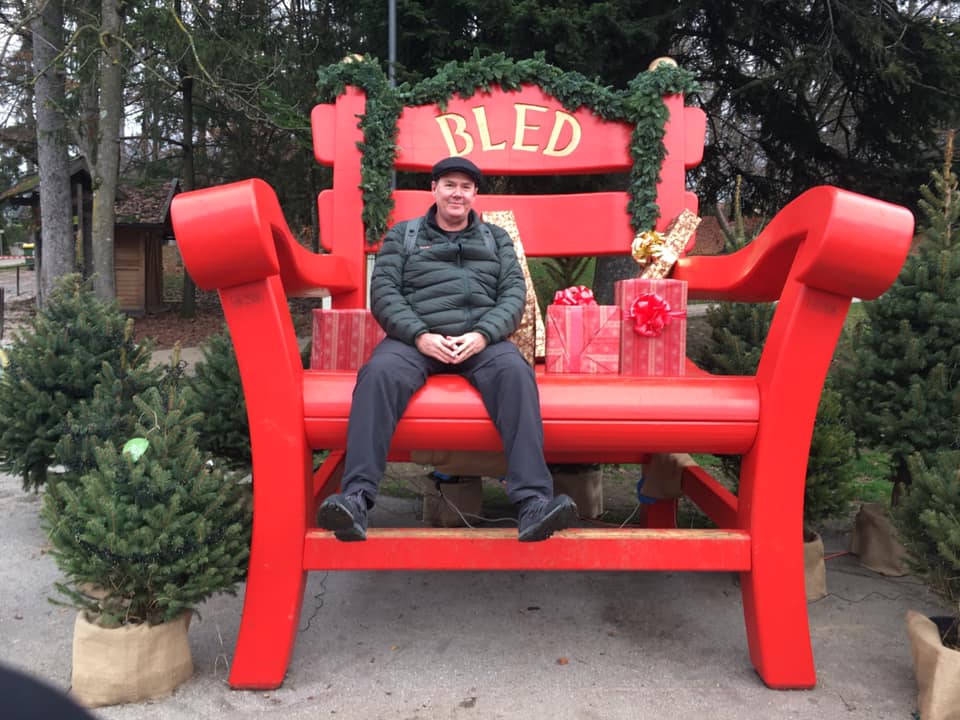 Previously, we didn’t jump in the lake — we walked around it.

For the second year in a row, and the third time since 2009, our European travels coincided with the Christmas holiday season during the period when holiday markets and fairs spring up all across the continent.

Of course, by “our” I mean Roger and Diana: We’ve taken in Christmas markets twice in Germany (2009 in Bamberg and 2018 in Munich), and once in Slovenia last month. The Christmas market opened in Lake Bled on the day we arrived, as did Ljubljana’s and Zagreb’s annual versions. The Christmas season in Trieste began the weekend after we returned home.

Actually there was another time long ago when I found myself in Europe during the holidays. This came when I was teaching English in Košice, a city then in Czechoslovakia, now part of independent Slovakia. I stayed there through Christmas of 1991, then into early 1992. I’ve no recollection of a Christmas market or fair in Košice during my presence.

Conversely my memories of Košice on St. Nicholas Day (December 6) and both Christmas Eve and Christmas Day are very clear. A few of my students were very kind, opening their homes and including me in their galas. I also remember quite well the low-key, non-consumerist vibe of the season, as well as the happiness when the street vendors began selling farm-raised carp from big street-side tubs. It’s a traditional Slovak Christmas meal.

Were I to hazard a guess, it’s that in 1991 communism hadn’t been gone long enough for older traditions to return. For corroborating evidence, a web page for Košice’s 2019 Christmas Market refers to it as the 25th celebration, which would place the first one in 1995, four years after my stint at university hospital.

Maybe some day we can go to Košice for Christmas, and this sentiment might surprise some readers. It shouldn’t. As an example, the Christmas market in Bled proved to be small but filled with heart. It was equipped for any visitor to eat, drink, shop for arts and crafts, and celebrate the festive season with friends — or strangers. The idea is to socialize, irrespective of the weather or one’s own religious perspective. The locals were welcoming, and the were having fun. So were we. 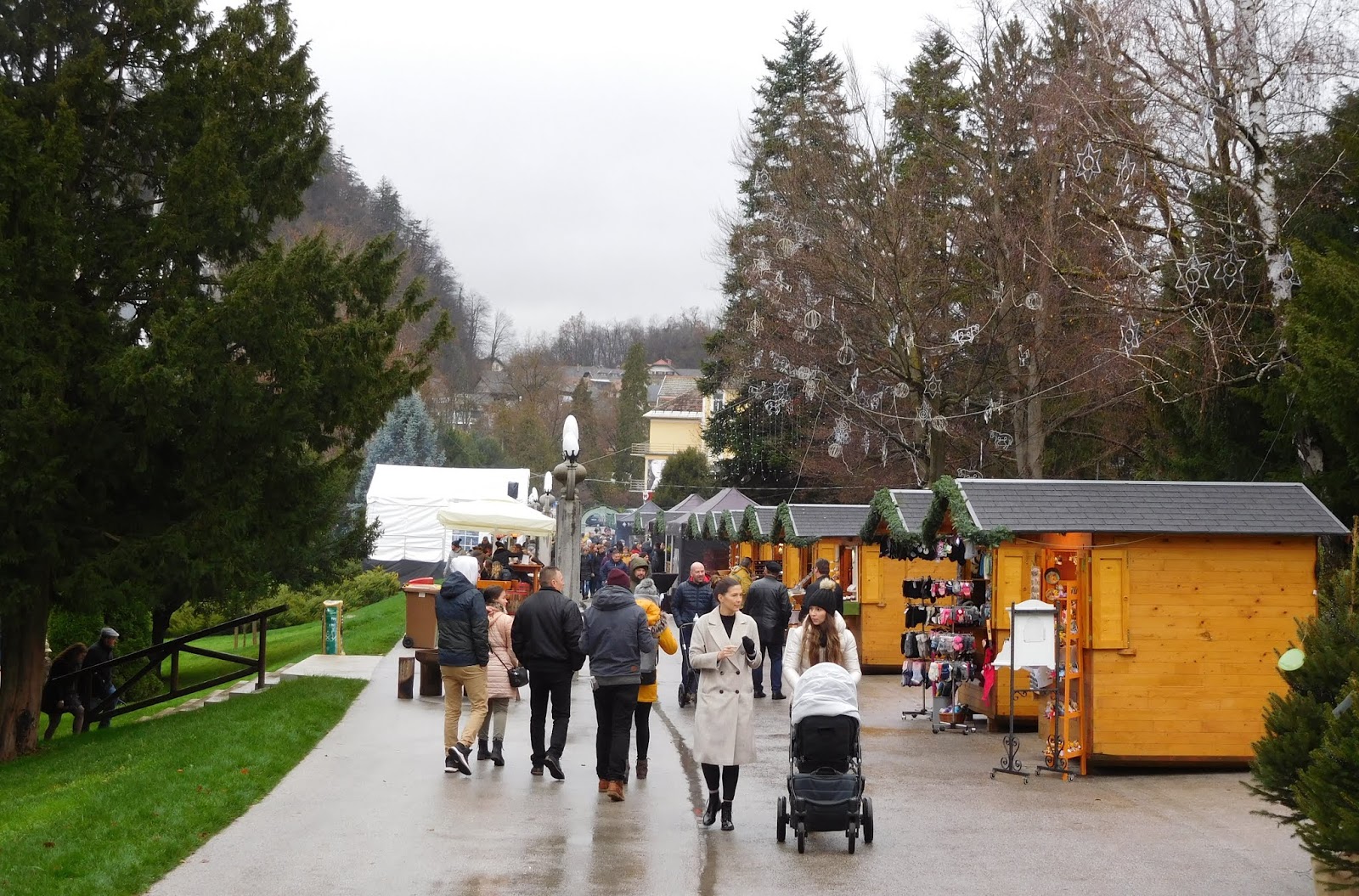 To be truthful, “carnival” food always attracts my attention. This absolutely delicious item is called posmodulja.

Take a close look at the woman working and the oven setup to the right.

It’s the same people who are explaining posmodulja in this video; it’s in Slovenian, although visuals are enough.

Coincidentally there’s an English-language description of posmodulja from a blogger who probably visited the very same summertime gastronomy festival depicted in the video.

We stumbled upon a Gastronomy Festival, which showcased food from all over Slovenia. It had a very Christmas Market-esque feel to it, and we couldn’t decide what to try! Ultimately, we decided to get a “posmodulja,” which is an old, almost forgotten Slovenian dish: dough leftovers, kneaded into a round shape, spread with a mixture of sour cream, herbs, or minced bacon, topped with cheese, and baked in the oven. It was prepared and cooked in a brick oven in front of us, and absolutely delicious! It tasted similar to a white pizza with garlic and rosemary, and it was oh so very tasty!

Yes, the posmodulja was quite tasty. So was this foot-long Carniolan sausage with mild kraut.

“Carniolan” refers to the former Duchy of Carniola, the historical boundaries of which comprise roughly half of Slovenia’s population.

A different pass-through at Lake Bled’s Christmas market yielded a tender, medium-rare beef carpaccio and roasted potatoes. Kremna rezina (cream cake; there’ll be a separate post about it) was there, and cans of Slovenian beer were readily available, along with the inevitable mulled wine.

Following are a few views of Bled (the town) and Lake Bled (the attraction) during the Christmas season. 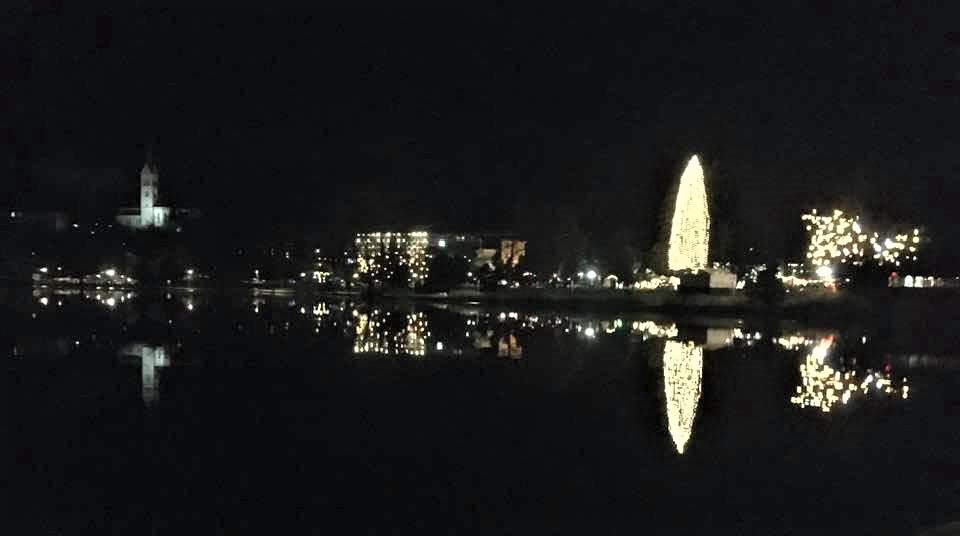