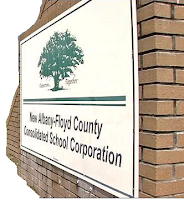 Here’s an update about last week’s column, which examined the presence of the PURE Initiative as part of the NA-FC Schools’ sex education curriculum. My friend Missy Smith did most of the writing.

ON THE AVENUES: These parents oppose their children’s exposure to the PURE Initiative as part of the NA-FC Schools curriculum. Here’s why.

… “Did you all know that there is an abstinence program taught in health classes at New Albany High School?? I repeat…THERE IS A PURITY CULTURE, SEX SHAMING ABSTINENCE PROGRAM TAUGHT IN HEALTH CLASSES AT NAHS! I received no notice that this would happen. I would have opted ALL the way out of this BS. I am enraged! I have worked very hard to keep this far away from my child so she does not carry any of the trauma that so many of us carried out of our teen years.”

Later she offered a link to the PURE Initiative.

“Update: the group that comes to every school district in Southern Indiana is called the PURE Initiative. Their website is https://connect2pure.com/. One of their “instructors “ is the executive director of Youth for Christ of Southern Indiana, another is affiliated with the local faith based crisis pregnancy centers.”

Missy’s letter to the school board was featured in the column. She later wrote this at Facebook:

As the new semester starts I will be moving forward in effort to protect NAFCS students from exposure to this shame inducing rhetoric. Contact me if you would like to help.

It’s also worth passing along a comment made by NAC’s co-editor, Jeff Gillenwater.

Missy is absolutely correct. PURE in no way represents objective, science based health education. They are a conservative christian group being granted captive student audiences to spread religious dogma, apparently with the approval of NA/FC administrators. As PURE explain themselves, they are an off-shoot of the deceptively named Choices for Women, a local sex and pregnancy “counseling” center that in reality functions as a staunchly anti-choice organization. PURE connects to CFW which in turn connects to other religious right groups like Focus on the Family whose anti-choice, anti-LGBT, and pro-theocracy political activities are well known. Hopefully, a lot more parents join Missy in objecting and bringing a quick end to this public health danger and Constitutional violation.

If you’re interested in assisting Missy and don’t know here, tell me and I’ll pass it along.